Restoration work to add more structural support to the three-story, century-old Weatherford Hotel is scheduled to begin tomorrow. The latest phase to return the historic building to its original grandeur will include removing the second floor mezzanine and returning the 19-foot-high ceiling to the lobby; creating a first-floor hotel room and office; and adding five more hotel rooms on the second floor bringing the grand total to 17.

During the next two months, the hotel will continue to serve breakfast, lunch and dinner; however, the main room of Charly’s restaurant and the lobby will be closed. Patrons will be able to enter the building through the Exchange Pub on Leroux Street or The Gopher Hole Pub on Aspen Avenue, which will open at 11 a.m. While the restaurants will be open throughout the restoration project, hotel rooms will not be available during March and April.

“We’re getting the hotel back to its structural integrity,” said Henry. “Starting with the basement and the creation of The Gopher Hole, we’ve been able to fortify the building with columns and huge beams that run the length of the hotel on both sides of its original sub-street level rock wall. Three years ago we took off 20-pounds-per-square-foot from the roof and replaced it with 3-pounds-per-square-foot material. Now we’re going floor by floor removing the heavy lath and plaster that was used to create walls. The plumbers were the building’s worst enemy. There was no plumbing originally and when bathrooms were installed, workers cut into the floor joists.”

In addition, a mezzanine had been added between the first and second floors, which took away the high ceilings in the lobby. When the project is completed, the Taylors plan to bring back the grand piano to Charly’s Pub & Grill played by local musician Charly Spining from the late1970s to the 1990s while patrons dined. 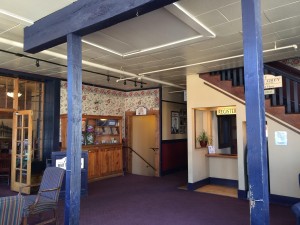 Renovations are underway at the Weatherford Hotel. The restaurants will remain open during renovations.

“We thank those who continue to visit Charly’s and the Weatherford for supporting the preservation of our historic downtown,” said Sam.

The Weatherford Hotel is Arizona’s oldest, continuously operating hotel. John W. Weatherford constructed the grand Victorian building for his mercantile store in 1897. However, with the popularity of the railroad and the draw of the Grand Canyon, he soon realized the bigger demand was in lodging. He opened the doors to guests on Jan. 1, 1900.