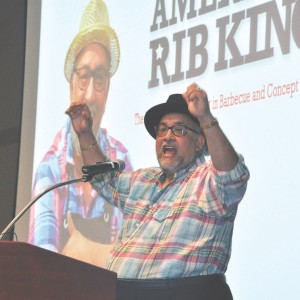 It was a morning devoted to looking ahead as a sold-out audience of more than 150 people filled a conference room at the High Country Conference Center to hear what presenting economic experts would predict at the tribal, state and local levels in Arizona for the economic year 2015.

This new conference was designed as a spinoff of the annual Economic Outlook Conference, which is in its 39th year at Northern Arizona University, but had the added element of focusing on Native American economic development.

The conference was sponsored by the Center for American Indian Economic Development (CAIED), which is located in the ground floor of the W.A. Franke College of Business on campus.

Esquerra said the 22 federally recognized American Indian tribes in Arizona have a significant impact in the state, specifically, rural Arizona.

In his introductions, Craig Van Slyke, dean of the Franke College, told the audience with a laugh, “If you like the conference, it’s my idea. If you don’t, it’s Levi’s idea.”

Interest in the conference ran high, with 18 tribes in attendance, including some from outside Arizona.

Chester Claw, 64, a Navajo from Tuba City, was eager to find out what kind of economic ideas might work for his tribe. “I want to see what could be successful out there,” he said. “Mostly just small stores are coming in. We need something bigger. It can’t be a steakhouse; people just don’t have the money. We need another Mexican restaurant, but I don’t think we’re ready for a big restaurant like Red Lobster. A lot of people are retired, but a lot of young kids are graduating and coming back up north.”

Jonathan Nez, an NAU alumnus and county supervisor representing Navajo County District 1, started the program with an invocation in his Native language.

The keynote speaker was “Famous Dave” Anderson, also known as “America’s Rib King.” Several other speakers preceded him, including Cheryl Cothran, director of the Arizona Hospitality Research and Resource Center, who spoke about the outlook for tribal tourism.

“National tourism is an enormous economic engine and major generator of jobs,” Cothran told the audience. “One out of every 14 jobs in the country is in the tourist and hospitality industry.”

She noted that the strength of the tourist industry has helped ease the effects of the recent Great Recession, which officially peaked in 2008.

The 75 million visitors to the United States in 2014 was a record high.

“It’s the excitement that’s happening at the federal level,” she added.

Arizona tribes are involved with tourism today, with 21 tribes having 23 casinos and 16 resort hotels that have 3,000-plus rooms.

She had several recommendations for how tribes could increase visitation, including enhancing aspects of cultural-heritage tourism and a sense of place, which accounts for about 80 percent of travelers today.

“It’s potentially a huge market,” she said. “Sometimes, people who live in a place all their lives don’t see what is unique right in front of them.”

Cothran said that cultural-heritage tourists are often wealthier and better educated, do little damage to the environment and have a real appetite for learning.

“They are looking for unique and authentic experiences that are found on tribal lands,” she said. “They often leave wanting more. They want to interact more with tribal people.

Festivals, walking trails, guided tours, arts and crafts demonstrations, storytelling and sampling of traditional foods are a few of the activities for tourists that she says tribes could add to the visiting experience.

Important populations for tribes to attract include retirees, minorities such as Latinos and Millennials born between 1977 and 1995.

Jeffrey Peterson, a research associate with the Arizona Rural Policy Institute and a 2006 MBA graduate at NAU, spoke about tribal economic contributions to the state.

“Arizona has the third largest Native population behind California and Oklahoma,” he noted.

And, it is “free branding” for the State of Arizona, he added.

“Casinos are mainly in rural areas where work is scarce. Tribal casinos are taking over as state funding dwindles.”

Ernest Jones, president of the Yavapai-Prescott tribe, talked about the economic future of his tribe, which was mostly positive.

Introduction of gaming in the 1980s has greatly improved the outlook for his tribe, he said, with two casinos, including Bucky’s Casino in Prescott, grandfathered in before 1988.

Before settlers, the tribe ranged over 9.3 million acres in Central Arizona, Jones explained.

Today, the tribe owns about 1,600-plus acres, and has many investment properties. With only 182 tribal members, the per capita income per member is high.

Young people are required to have a GED and to be 21 years old before receiving their “per cap” from the tribe, he said.

“The latest thing coming up is ranching and agriculture, with tribal herds, and vegetable and tree farming,” Jones said. “There is quite a bit of water on tribal lands.”

All in all, he said, things are looking good for the tribe.

Audience comments included those from Bob Lomadafskie, a Hopi senior with 35 years experience in the arts and crafts industry. “We need to eliminate some of the bureaucratic red tape,” he said. “We need to attract industry – something that is green or fits into the philosophy of the tribe. There’s so much work that needs to be done. ”

Joseph Cromwell, a junior in criminal justice at NAU, is a member of the White Mountain Apache tribe and the Native American Business Organization on campus. “Growing up on reservation and coming to NAU, you get a different perspective on what you can bring back to your tribes,” he noted.

He said he wants to help his tribe attract millennials and bring more people to the tribe’s ski resort, Sunrise Park Resort.

“I feel healthy! I feel happy!” they chanted.

Anderson said some of the characteristics of a successful person include passion, enthusiasm and having a good attitude.

“Why can’t we show up to our work, to our families with that same type of enthusiasm?” he asked. “With each and every one of us, there’s a winning lottery ticket… Each one of you has within you an idea that could change the world.”

Anderson said his businesses have created 20,000 new jobs, brought in billions of dollars in sales and changed “the way our industry could look at BBQ.”

As a child, he was told he was prone to daydreaming and lacked focus, but that was really “visioning” and “multi-tasking,” he explained.

Anderson said the most important thing is to never give up on your dreams. “If you have dreams and you never, ever give up on those dreams, then amazing things could happen.”

In his summation, he spoke about the historic strength of the Native American people.

“We were self-sufficient; we could take care of ourselves,” he told the audience. “The real reason we respected our forefathers, they were survivors. They could survive successfully in the environment; they lived without handouts. They were able to take care of their families. Our real strength is our ability to survive; that’s what makes us Indian.” FBN