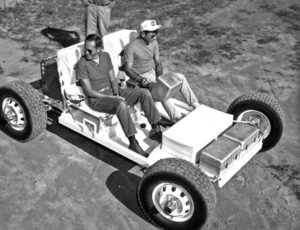 he 10th and youngest person to ever walk on the Moon, Apollo 16 Lunar Module Pilot, General Charlie Duke, is launching the 30th annual Flagstaff Festival of Science To the Moon and Beyond, Sept. 20 – 29, 2019.

Duke is scheduled to be the W. L. Gore & Associates Keynote Presenter at 7 p.m. on Friday, Sep. 20, in Northern Arizona University’s Ardrey Auditorium.

“I found Flagstaff to be one of the most interesting places that we visited to study geology. I loved the people, the San Francisco Peaks and the beauty of the area,” he said.

In preparation for his famous 1972 space flight, Duke, like all of the Apollo mission astronauts, trained in Flagstaff. He practiced maneuvering a Moon buggy prototype over rough volcanic terrain and in and out of a simulated crater field north of town. According to Duke, “The suspension provided a lot smoother ride than we had on the Moon! The practice rover on Earth was 800 to 900 pounds and a lot more stable. The one on the Moon only weighed 80 pounds. The thing bounced around a lot!”

Duke also visited Meteor Crater and hiked the Grand Canyon as part of his training. As a tribute to Flagstaff and the support the astronauts received, he and Apollo 16 Commander John Young named a Moon crater near their Lunar Highlands landing spot “Flag Crater,” a name that remains today.

“Most of us couldn’t tell the difference between a clod of dirt and a rock,” said Duke. “But with the astrogeology branch of the USGS [in Flagstaff] helping us, we felt well-qualified to describe the rocks we found on the Moon and pick up the right ones. I loved all those guys!”

Duke will share his experiences on the Moon and provide insight into the future of space travel. “I see us back in space with a permanent Moon base. There, we can develop systems and the confidence in repairing those systems, and eventually launch to Mars. We’ll learn how to live in deep space like we do in Antarctica and cycle in crews every couple of months,” he said. “We are going to want to see people going into space more. The human heart is meant to explore.”

“Charlie Duke is a living legend who has played a monumental role in advancing the human race beyond our planet,” said Lowell Observatory Historian and Festival Volunteer Kevin Schindler. “It’s on the shoulders of men like Duke that we are now sending spacecraft beyond Pluto to the outer reaches of our solar system.”

The Flagstaff Festival of Science is a key partner with the City of Flagstaff in celebrating Flagstaff’s Lunar Legacy. Throughout the year, the Festival and the city are showcasing Flagstaff’s extensive involvement in the Moon missions to mark the 50th anniversary of the historic Apollo 11 Moon landing and Neil Armstrong’s famous “one small step” felt around the world, which occurred July 20, 1969. Scientists and historians are providing presentations in the Lunar Legacy Lecture Series, 6-7:30 p.m., on the second Wednesday of each month through 2019 at the Coconino Community College Lone Tree Campus, flagstaffarizona.org/lunarlegacy/.

“As Flagstaff joins the world in celebrating Neil Armstrong’s famous ‘one small step,’ this year, we are honored to showcase local scientists and organizations whose efforts in the past, present and future capture our imaginations, instill a tremendous amount of pride in our nation and stir that spirit of discovery in all of us,” said 2019 Festival Board President Alyssa Deaver.

“The Flagstaff Festival of Science is a gift the community gives itself,” said Flagstaff Mayor Coral Evans. “I am so grateful to live in a place where science discovery and innovation are embraced and put on center stage so that we can all be more informed citizens prepared to make complex decisions. It’s comforting to know our future will be in good hands as our children are raised in this powerful learning environment created in our community. Bravo to the Festival volunteers who have steadfastly taken a leadership role in science education and mentored other communities to do the same.”

This year, the Flagstaff Star Party joins the Festival, Sept. 26-28, at Buffalo Park. In addition, the Coconino High School CocoNuts FIRST Robotics Team is building a Moon rover replica to demonstrate at Festival events. This summer, The CocoNuts will also be hosting a FIRST Robotics Invitational so teams from all over can test their robots in a simulated Northern Arizona crater field where NASA tested theirs.

To help bring astronaut Charlie Duke and impactful science activities to Flagstaff, generous donors are offering a $10,000 Lunar Legacy Challenge and will match individual donations dollar for dollar. Contributions of $500 or more include tickets to the VIP Reception and a professional group photo with Duke. Tax-deductible contributions can be made through credit, debit or PayPal on the Festival’s website, scifest.org.

The award-winning Festival is the longest-running event of its kind in the Western Hemisphere. It is made possible through the generous support of businesses, organizations, foundations and individuals. For more information on the developing program, visit scifest.org or follow the Festival on Facebook at facebook.com/flgscifest. FBN