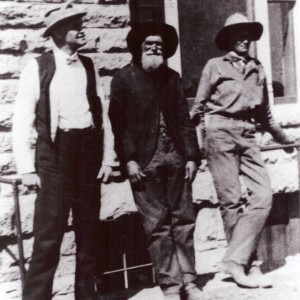 The Weatherford Hotel’s survival spirit has been tested many times during the last century. Two owners died trying to keep it going, at least one went bankrupt, and the structurally stressed building had also been delivered a death sentence.

The one resilient thread that’s kept the Weatherford from completely unraveling is its ability to provide a home for travelers, construction workers, bus drivers, actors and athletes, along with a number of crazies.

John W. Weatherford constructed the grand Victorian building for his mercantile store in 1897. However, with the popularity of the railroad and the draw of the Grand Canyon, he soon realized the bigger demand was in lodging.

On Jan. 1, 1900, the first day of a New Year and a new century, he re-opened the building as the Hotel Weatherford. During his lifetime, he hosted such notable legends as President Theodore Roosevelt, gunfighting lawman Wyatt Earp, and cowboy author Zane Grey. The hotel was reported to be “first-class in every respect,” with high ceilings, tall windows, elegant balconies, a sunroom and a lounge where gentlemen could drink their sherry, smoke cigars and discuss business ventures.

The first quarter century was a good one for the hotel with its 25 guest rooms. However, a nasty divorce and risky business venture – a toll road to the top of the San Francisco Peaks – led to the demise of John Weatherford. He died a penniless pauper; some say of a broken heart. He left his only possession, a car, to the nurse who cared for him in his final days.

As the building changed hands, owners continued to create more hotel rooms to bring in revenue. Heavy plaster and lath was used to erect walls. Additional bathrooms with heavy ceramic tubs, sinks and toilets put more weight and stress onto the building’s foundation, as well as the roof, as third floor rooms were secured upward.

During the ‘50s, the rooms were becoming less popular for travelers as Route 66 motels began offering television sets, swimming pools, ice machines and parking right outside the door.

Former Wilcox Mayor Wayman Hopkins worked at the Weatherford from 1955 to 1959, while earning his education degree at Northern Arizona University. He took over management of the building and its 43 hotel rooms when owner Al Hall died from a massive heart attack.

“They were mostly basic rooms with double beds, some had twin bends. One slept five people. Five workers could fit in there and we rented it to them cheaply,” he said.

Wayman learned how to paint on the job, painting all the rooms and hallways, a skill that served the town of Wilcox later, as he is credited with keeping the community’s three schools painted for 29 years.

He recalls a stay by boxer Billy Conn. “He had a drinking problem at the time and became reclusive. We worked with him and contacted his family in Phoenix.”

By the 1970s, the old building was in dire need of resuscitation. Flagstaff leaders were ready to tear it down. That’s when Henry Taylor, a young therapist who grew up in an historic Holbrook hotel, and his brother, Lloyd, decided to buy it and breathe new life into the deteriorating property.

“It was such an important part of western history, we couldn’t just let it go,” he said.

They began creating ways to keep the doors open. With the Greyhound bus depot a block away, they made an arrangement with the drivers. They could sleep on top of a bed for five hours during the day for $2.50, which meant the room could be rented to someone else for the night.

A youth hostel on the second floor provided a steady stream of guests. And rooms were also used to house therapy patients. Some lived there for years, like Queenie, “a harmless schizophrenic who came with the building,” recalled Flagstaff musician Charly Spining.

Queenie, also known as The Duchess, had long white hair and often wore a skirt, argyle knee socks and moccasins. She claimed to be a descendant of Egyptian royalty and preferred the name Queen Lily Okalani the Third, which is what the sign said that hung on her door. Her family, who lived in the Hamptons, continued to pay her rent.

“You never knew what to expect from her,” said Taylor. “She called me General Marshall and would ask for updates on the troops fighting in the Civil War.”

Spining, who grew up in Ganado and was Lloyd’s brother-in-law, came to work as the hotel’s bookkeeper in 1976. He had an apartment there “to keep an eye on the place and make sure none of the tenants burned it down.” He entertained customers by playing classical piano during lunchtime when the Taylors opened Charly’s restaurant in 1980. Lloyd, a professional singer, would sometimes contribute to the performance. This was the same year Pamela “Sam” Green came to work for Henry, whom she married in 1983, and joined in the quest to restore the hotel to its original grandeur.

“I still get feedback from people who were regulars and came in every day for the atmosphere, food and the music,” said Spining. “It was the only place in town with that type of live background music.”

“Henry was a good friend of mine. We worked together in vocational testing at NAU,” said Gershater, who would watch him strip away the plaster on the outside of the building and uncover the original brick.

“He was taking on this big venture. The building had lost its stature and it was a quantum jump to take it from where it was to the upscale place that it is today. They had amazing courage. They wanted to rehabilitate the building one room at a time. To me, the biggest part of the Weatherford story is that they did it. Today, it’s a landmark.”

By Sam Green and Henry Taylor