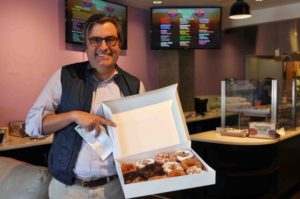 Some things in life are irresistible. Take the doughnut, for example.

A visit to Fractured Prune Doughnuts on East Piccadilly Road in Flagstaff’s Aspen Place will confirm this friendly addiction.

Inside the kitchen area, colorful rows of toppings and glazes are at the ready to adorn hot, fresh cake doughnuts.

One guy who is passionate about all things doughnut is Mark Rothermel, an Army veteran with a business background who owns the Flagstaff Fractured Prune franchise, which opened in the summer of 2016.

“It’s amazing how excited people are when they try our doughnuts,” said Rothermel, who was born in Chicago and has been in Arizona since 2012. “We love to bring that goodness to them.”

Today, the Flagstaff Fractured Prune menu features the top 15 specialty flavors of doughnuts, but that was not always the case.

“When we first opened, people felt a little overwhelmed,” he said. “We had 50 different flavors. Around last fall, we started realizing people were almost intimidated, so we wanted to make the choices simpler, less stressful – so we did the top 15.”

Rothermel, 43, studied economics at Vanderbilt University and was in the ROTC. After graduation, he served in an Armored Cavalry Regiment in Bosnia, and then went on to get an MBA at Indiana University, followed by a variety of work experiences.

“I was in finance, management consulting and worked for insurance companies, but never really found a home, until the doughnut opportunity came along,” he explained.

He left corporate life in 2015 and went on to become the CEO and developer of five Fractured Prune doughnut stores in three Western states – Arizona, Nevada and Colorado.

The Fractured Prune history is fascinating, beginning in 1976 when original owner Tom Parshall bought Josh’s 46th St. Market in Ocean City, Maryland and transformed it into a doughnut shop.

Hunting for a name for his business, he read through the abstract of the land he had bought and found an unusual name there: Prunella Shriek, who had owned much of the land in that area in the late 1800s. While browsing through the Baltimore Library, Parshall came upon a book titled “Ocean City Lore” and was thrilled to read a paragraph devoted to Prunella. Although she was in her 70s, it seems she had been highly competitive and had participated in a variety of sports including ice-skating and skiing races, and tennis and ping-pong championships. Because she was older, her bones were brittle, and she kept getting injured, resulting in townspeople in Ocean City giving her the nickname “Fractured Prunella.”

Thus, Parshall was inspired to name his doughnut business Fractured Prune, to honor the memory of a wonderful, spunky older lady.

Today, there are more than 20 Fractured Prune franchises on the Eastern Seaboard alone.

Rothermel said his favorite doughnut is the O.C. Sand, with a honey glaze and cinnamon sugar; it has long been the most popular treat at the Ocean City store.

“It’s just such an amazing doughnut and blows away your expectations,” he said. “Our plain doughnut is also phenomenal. It’s not greasy and squishy. It has a kind of a crunch to it.”

Rothermel has his own focus group at home for trying out new doughnut recipes. Married, he has four children, ages seven, five ,three and one, and his wife, Kelly, keeps up on all the accounting for the businesses.

“The kids love doughnuts. I’m the coolest dad in all the classes. They love riding in the Las Vegas car and the Colorado truck,” both of which have the Fractured Prune signage.

His training in the Army has helped him create and lead teams, and to build “what the brand means, and to try to find solutions on the ground.”
The job, he says, is fun, and he puts in long hours.

He is supervising about 60 employees, 12 each in the Flagstaff, Chandler, Glendale, Las Vegas and Denver stores.

“It’s a lot more than just working in a doughnut shop It’s leadership development and getting people to run with their own intuition.”

Rothermel, who lives in Scottsdale, drives a lot on the job, including traveling to Colorado to pick up coffee beans from Whiskey Barrel Coffee to bring to Arizona, because he believes that is a superior product.

“I drink the coffee all day, so I wanted it to be good quality,” he said.

“We do special assorted dozens, complementary combos,” he said. “People like the Sweet and Savory Box, with the Bacon Bomb [with maple glaze, cinnamon sugar and bacon]. They enjoy getting a box to take with them. They want to try a bunch of things. It’s more of, ‘This would be a fun box to try,’ a full experience.”

There is also a delivery system that has scheduled delivery for free of larger orders of three or more dozen doughnuts to businesses that contact the store.

If inspired, visitors to the Fractured Prune can also create their own doughnut combos, choosing their own glazes and toppings from those available.

Rothermel said he has met many Chicago transplants in Arizona.

The Flagstaff community, including many resident Northern Arizona University students, has been very positive about its new doughnut shop. Part of the challenge has been to familiarize people to the Aspen Place at the Sawmill location at the corner of Butler Avenue and Lone Tree Road.

“A lot of people are getting used to the idea this part of town exists,” he said. “It’s an entire shopping experience. It’s about getting that habit in the morning. Anything morning is a unique challenge. People are sort of set in their ways.”

Rothermel said he and the store want to “get into people’s morning rotations” by asking, “Can we be in your group of three breakfast trips?’”

He is working the end of the day too, with expanded hours at night including to midnight on Fridays and Saturdays. FBN

Mark Rothermel, CEO of the Fractured Prune franchise in Flagstaff, holds up a dozen assorted doughnuts. The boxed selections typically feature some of the customer’s favorite combos, which include glazes and toppings like chocolate, maple, caramel, berry, honey, mocha, sea salt and powdered and cinnamon sugars.