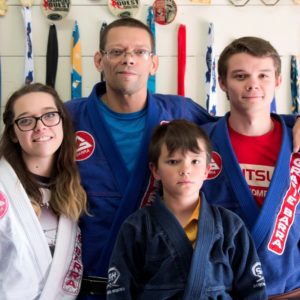 Meet Max Goldberg. He gave up a successful law career in Florida, moved to Flagstaff and began teaching jiu jitsu.

“After practicing [law] for 10 years and working many, many hours, with some great legal accomplishments, many fulfilling and not so fulfilling days, I knew I had a deeper calling in life,” he said. “The more stress I was under, the more I had to train jiu jitsu. I found myself sharing with people how jiu jitsu could save their life and make a better life for them.”

Goldberg started his training at the age of 27 and earned his black belt in 2009. He said some of the benefits of jiu jitsu are that it helps a person relax, builds confidence and strengthens problem-solving skills.

“All these benefits made me a better father, husband, family member and friend,” he said.

Soon, he realized he needed his own venue for teaching the art and its values, but that it would require a move.

“Why Flagstaff?” he asked.

Goldberg is an alum of Northern Arizona University and Flagstaff had been the go-to place to visit on vacation for his family since 1990.

“We already had friends and family living here and loved Flagstaff,” he said.

“This is a wonderful community, plus I get to hike and snowboard in the winter,”

“The program grew and did better than expected,” he said.

It was not long before he was able to venture out. For the past three years, he has been teaching from his Mike’s Pike address.

“Once I made up my mind to teach and share my love for jiu jitsu, I knew it was my next calling in life,” he said. “I knew there was the potential for some financial struggles, but that my family would benefit from a healthier and happier way of life.”

And there were struggles. The family went from a house on the water in Florida, three expensive cars and vacations all over the world to a trailer in Kachina Village.

“Our income was reduced by 90 percent,” he said.

His wife of 26 years, Cheryl, said there were times when she wondered about this decision.

“I can’t say I was thrilled and I was a little surprised. He had put in so much effort into his law practice,” she said.

On the other hand, the family hardly ever saw Max.

“One day our son, who was four years old at the time, asked, ‘Did daddy go on vacation?’ I knew then something had to change.”

The couple also had a 16-year-old daughter at the time. She went from wearing designer labels to “not being able to make those purchases any longer,” said Cheryl.

“It was a bit of culture shock, but it was beautiful. We hiked together as a family. We were closer as a family because of it,” she said.

In the end, the family adjusted and Cheryl found the perfect job for herself in the human resources department at NAU.

“We couldn’t have found a better community,” she said.

Although Goldberg does not consider teaching jiu jitsu “work,” he loves the idea of being able to ride his bike to work.

“I now get to train with my two sons and daughter every week. We train and compete together. I cannot think of a better gift I can give my children than the gift of this amazing martial art and the journey of doing it together as a family,” he said.

Goldberg is also a physical education science instructor for NAU.

“I teach the introduction of jiu jistu to over 60 NAU students each semester. I love working with young students and sharing jiu jitsu with them,” he said.

The program for younger kids is taught by his 26-year-old son, who teaches the children self-discipline, focus, respect and confidence.

“A couple of times a year, I offer a free self-defense seminar for women,” he said. “I feel my jiu jitsu program is successful because I learned from the best, Eduardo de Lima, who taught at the Gracie Barra School in Brazil. He now has 50 students.”

“My father. He was an attorney as well and argued before the Supreme Court. I kind of based my initial appreciation of life on my father, the guy I admired and looked up to, and who was a very loving and good role model,” he said.

“Two nights ago when my dog was getting chased around the yard by a skunk. The skunk was spraying a little.”

“The Art of Learning, by Josh Waitzkin. It’s a really a good book that teaches to learn in life how hard work is important and how our failures are a big part of our success.”

“Jiu jistu, for sure. It was my saving grace that kept me going.”

Block-Lite Next Generation Appreciating the Past
Credit Union Becomes OneAZ