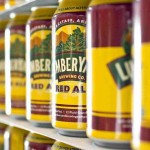 “So now there is consumer drive, because they know that good beer does come in cans,” explained the young entrepreneur, who, along with two brothers, opened doors to the brew- pub three years ago. “We were thinking we would only serve beer across the bar and in our restaurant. We didn’t think we would get into the whole big distribution side as far as cans and bottles. We thought maybe a couple kegs and accounts.

“It started off with the Grand Canyon National Park, Grand Canyon Railway, different places in Tusayan and some in Flag that wanted to carry our beer. When it became too much of a headache, we got a distributor.”

Peasley’s confident demeanor while leading a tour of his brewing and canning facility conveyed that not too much could really give him a headache, or stand in the way of his success.

“Then we expanded this section of the building and bought six more 1,100-gallon stainless-steel tanks,” said Peasley, striding into the brothers’ first warehouse expansion behind the brewpub. The smells and gurgling sounds of beer fermenting filled the 6,500-square-foot space.

“We’ve had such an increase in sales we’ve actually kind of struggled to keep up during the summer. We’ve never run out of beer, but it has gotten close,” revealed Peasley. The demand prompted the brothers to order seven more tanks that will be delivered in February 2011. “If we have the same triple-digit growth that we’ve had prior years – every year we’ve tripled our growth – if that happens one more time, we’re going to need those tanks.”

Even though last year a second expansion added 2,600 square feet of storage, the brothers are still outgrowing their space. “Once those tanks come in, we will be maxed out space-wise. I expect that in three years we’ll be looking for a new 30-50,000-square-foot location in Williams or Flagstaff,” predicted the eldest Peasley brother. Grand Canyon brews are distributed by Northland Beverage, Fred Nackard Wholesale Beverage Company, Crescent Crown Distributing and Finley Distributing “to every corner of the state.” The brothers are currently courting Nevada distributors.

In Flagstaff, Beaver Street Brewery – also busting at the seams – opted to open a second location, Lumberyard Brewing Company, in May 2010.

“One reason we even explored this [expansion] was because Beaver Street was con- strained for brewery space. Our production was to capacity,” said Evan Hanseth, owner and brewmeister. “We looked at several options: industrial buildings on 89A and at the Flagstaff airport and retail space at Aspen Place at the Sawmill. Then, this building came up,” said Hanseth, from the historic structure situated right in the hubbub of downtown Flagstaff.

“We figured that if we were to open another location, we’d get into distribution.” Before the latest expansion, Beaver Street’s brew was not sold off-site through a distributor. “Distribution takes a while to ramp up, so it was advantageous to tie in a restaurant to the new brewing facility. The restaurant brings in immediate in- come and retail sales.” Less than three months ago, Alliance Beverage of Phoenix began

distributing both Beaver Street and Lumberyard beer in cans and kegs.

“Canning is the way of the future for micro- breweries,” said Hanseth. On the wall nearby, a poster of Lumberyard Red Ale admonishes hikers to “Pack it in, Pack it out,” and features a colorful beer can. “Cans are more sustainable and environmentally friendly than bottles,” said the Flagstaff brewmeister. “And cans hit mar- kets that bottles can’t.” Bottles aren’t allowed at pools, golf courses or on river trips through the Grand Canyon.

“With the quality of cans and liners these days, there is essentially no difference in taste of beer packaged in bottles,” explained Hans- eth, who is worried that they will soon outgrow their current canning system. Lining material inside the can keeps the metal from imparting flavors into the beer.

“Lumberyard Brewing Company is very close to Beaver Street Brewery, but the proximity offers good exchange and support,” said Hanseth. For instance, Lumberyard’s larger capacity can produce bigger batches of the most popular beers while Beaver Street is used for smaller- batch-size specialty beers. Lumberyard is setup to produce 4,000-5,000 barrels per year, compared to Beaver Street’s capacity of 1,400 barrels.

Another Northern Arizona microbrewery turning to cans as a way to package and distribute is Mogollon Brewing Company. “The choice to go into cans was a pretty easy one once we found a canning machine. Cans protects beer longer, and the package is 100 percent recyclable, versus bottles that are only 80 percent recyclable,” said Andy Silver, who is in charge of marketing and sales at Mogollon Brewing Company.

“Canning machines are really expensive, and finding one to meet your needs is difficult,” said Silver, who is also an investor in the Flagstaff company. The team at Mogollon eventually purchased from Canada’s Cask Brewing Systems and canned their first beer in May 2009. They, too, had outgrown their space, but chose to leave their pub behind when they moved to larger industrial space on the eastside of Flagstaff.

“We’re growing our products – spirits and beer – and we needed a bigger space. The place we were in was way too small for us. We looked for a place with a bar, but that didn’t work out. One of the business partners, Rand Jenkins, took over the bar at our old location and opened the Green Room.” Mogollon beer and spirits are now distributed to stores throughout Arizona by Hensley & Co. Phoenix.

Arizonans who drink beer are slowly switchng to cans. According to the Beer Institute’s Brewer’s Almanac, in 2006, 45 percent of beer sold in Arizona was packaged in cans. Metal cans’ package share grew to 45.9 percent in 2007 and 47.1 percent in 2008.

And those numbers will likely continue to rise, especially this month, when many celebrate Oktoberfest activities with a steady supply of their favorite Northern Arizona brews on hand. FBN