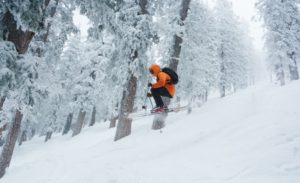 Spencer Plumb could hardly believe his luck. The Arizona program manager for the National Forests Foundation (NFF) was counting on funding from Arizona Snowbowl’s Community Benefit Day to be a boost for forest restoration efforts on Hart Prairie, but he was not expecting this: the NFF Community Benefit Day was scheduled for Sunday, Feb. 24, a “bluebird” day of sunshine just after the record-setting storm that dumped more than four feet of snow on the San Francisco Peaks.

“The new daily (midnight to midnight) record was set on Feb. 21, with 35.9 inches. It was a record for any single calendar day,” said National Weather Service Flagstaff Meteorologist in Charge Brian Klimowski, Ph.D. “For the entire storm, we received a total of 40.8 inches in town.”

“We are going to use those funds to do some thinning work on Hart Prairie, both meadow and forest restoration work,” said Plumb. “We’ll be removing ponderosa pine trees from the meadow where they don’t really belong, but have grown in because of decades of fire suppression. Forest restoration restores the ecological balance and decreases the risk of a catastrophic wildfire.”

Another $12,500 will go to the Northland Family Help Center, the result of Snowbowl’s first Community Benefit Day on Sunday, Jan. 27.

“Snowbowl was very generous with not only funds, but also their time and dedication toward bringing awareness to Northland Family Help Center and the Flagstaff Initiative Against Trafficking,” said Human Trafficking Program Coordinator/Mobile Advocate Kate Wyatt, MSW. “With the donation, we will be able to purchase items that human trafficking victims may need when they are in crisis, as well as items that help raise community awareness. We will also be able to fund training opportunities that enhance our knowledge so that we can better serve victims in our community.”

“Snowmaking has increased our ability to help non-profit organizations because we can count on the ski area being open and book events and groups with certainty. With snowmaking, we bring predictability into the business,” said Arizona Snowbowl General Manager J.R. Murray. “Predictability equals execution. And, on years like this one with productive storms, we can help the community even more.”

Murray calls this dependability “the snowmaking difference.” Groups and programs supported include the 5th Grade Ski Program, Northern Arizona University’s Learn to Ski and Snowboard classes, adaptive programs, the Flag Ski Team and many others.

While snowmaking helps the ski area open early for the season – Snowbowl is committed to being the first Arizona ski area to open and last to close – it also builds the foundation for a solid spring season, says Murray.

“Historically, we did not have strong spring break visitation because of the inability for families to plan. Now that we know with certainty that we will be open, we are aggressively promoting spring break. Last year it worked with record turnout. Snowbowl provides great skiing for many out-of-state visitors who add skiing onto their plans.”

Long-time Snowbowl season passholder Susan Golightly skis with her grandchildren during the week. “Conditions at the end of February were absolutely beautiful. It was like spring skiing – sunny days, beautiful skies – just the way we like it!”

Last March, Snowbowl had a record 55,000 visits. This year, with an average of 15,000 winter recreationists each week, Murray anticipates exceeding last year’s numbers. He says the snowmaking difference has contributed to the resort’s popularity and made it possible to pay for improvements.

“When we get big snowstorms, or reach six feet of base, skiers come for the powder who would not ordinarily come to Snowbowl. Now, they see the new chairlifts, new trails, larger beginner area and new skier bridge connecting Hart Prairie Lodge to the Sunset and Grand Canyon Express lifts and are pleasantly surprised at how Snowbowl has evolved.”

The Flagstaff Convention and Visitors Center says all key indicators show visitation on the rise as a result of the exceptional snow season.

“For the month of January, we saw all tourism metrics increase. Occupancy [in hotel rooms] was up 5.4 percent, the average daily rate was up 11.1 percent and revenue per available room was up 17.1 percent,” said City of Flagstaff Economic Vitality Director Heidi Hansen. “Our Convention and Visitors Bureau team also shared the ‘stay and play responsible’ message in hopes to have our visitors and locals remember to clean up after their snow play and more.”

Murray says the economic forecast called for more than 5,000 Flagstaff hotel rooms to be booked by skiers this season. “Snowbowl is not solely responsible, but is clearly a contributing factor to visitation and increased sales tax collections.”

As Flagstaff businesses, schools and government organizations braced for the snowy winter, Mountain Line and Arizona Snowbowl teamed up to enhance the Mountain Express shuttle route for the ski season, adding all-day service on weekends and holidays and a free Park-n-Ride at Flagstaff High School.

“The frequent and reliable service was well-received, as more than 26,000 riders boarded throughout the season, representing a 165 percent increase in ridership over the previous record season,” said NAIPTA (Northern Arizona Intergovernmental Public Transportation Authority) CEO and General Manager Erika Mazza. “Robust transit service is one of the key components to mitigating winter congestion on Highway 180, as shown by this season’s dramatic ridership increase, coupled with relatively low congestion in the corridor.”

Mountain Express is funded by Arizona Snowbowl. This year’s free Park-n-Ride was made possible through a partnership with the Flagstaff Unified School District.

“The goal is to someday have seven-day service from Flagstaff to Snowbowl,” said Murray. “Our desire is to minimize the traffic and encourage carpooling and public transportation.”

“We appreciate Snowbowl’s engagement around transit expansion,” said Coconino County Supervisor for District 1 and Board Chair Art Babbott, who has been bringing groups together in an effort to better manage and mitigate peak winter recreation congestion.

Meantime, while aiming to fulfill its goal to be “first to open, last to close,” Snowbowl plans to stay open on weekends through April, changing its hours to 10 a.m. – 4 p.m. “We will evaluate the conditions after Easter,” said Murray, “but will attempt to ski to Cinco de Mayo if we can!” FBN

Raising Awareness About Colorectal Cancer Screening, At-Home Tests
Mindfulness: What it is, How it Works