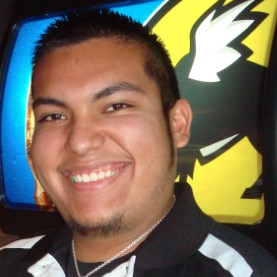 By all accounts, Romaniz is no ordinary employee. “He’s probably one of the hardest workers I’ve ever met,” says General Manager Jamie Stancil. “He was holding two jobs while going to school.”

Assistant Manager Jason Whittaker agrees. “Carlos is a model employee.” And co-worker Shannon Collings says he’s eager to help people to make sure the experience is wonderful. “The service industry is great, but it’s not always enjoyable. Carlos literally enjoys his job.”

In training as a manager, Romaniz not only has gotten noticed by his co-workers and supervisors, but also by the folks at Snagajob from far away Richmond, Va., who believe the sky’s the limit for hourly workers like him.

Romaniz began his shift preparing for a visit from the corporate office. He came in early for the staff meeting to make sure no feathers would be ruffled in the wings restaurant. But then Jon Ridzon showed up, a guy who makes a very big deal out of valuable employees.

Ridzon introduced himself as the public relations analyst for Snagajob, America’s largest hourly employment network for job seekers and employers. He congratulated Romaniz on his outstanding performance, acknowledged his passion for flying and applauded his educational efforts at Yavapai College toward his goal of becoming a pilot. He then awarded him with a backpack full of cool aviation tools.

“Through your hard work and dedicated approach to your job at Buffalo Wild Wings, you have set a terrific example for the millions of hourly workers and job seekers across the country,” said Ridzon.

Romaniz was speechless. As he was trying on the aviator wristwatch and sunglasses, the day began to really take off. He was about to be hijacked.

Like the Tom Cruise character “Maverick” in the movie Top Gun, North Aire Flight Instructor Robert Dodson was pulling up on his motorcycle outside the Prescott Valley franchise. Guided by Ridzon, Romaniz was greeted with a flight jacket from Dodson and a rapid-fire itinerary of what was to happen next. In the parking lot, with his co-workers cheering him on, Romaniz struggled to process that he would be spending the day flying.

All this whirlwind of activity was part of Snagajob’s new “Off the Clock” program. The brainchild of Ridzon, Off the Clock is designed to shine a spotlight on the nation’s hard working hourly employees and reward them with the opportunity to pursue their passions in life.

“For some hourly workers, that passion may be working toward a promotion with their current place of employment,” said Ridzon. “For others, it may be outside of their hourly job that we can help them pursue.”

Since he was five years old, Romaniz has been looking up. “My family took me to air shows right here,” he said at Prescott’s Ernest A. Love Field. “My dream is to have my office at 40,000 feet, going 600 miles an hour.”

With two hours of in-flight training already logged, Romaniz shadowed Dodson as the single engine Cessna 182 was prepared for flight, and then confidently climbed into the cockpit.

“We’ll work our way around the thunderstorms,” said Dodson, “and see if we can fly over the Grand Canyon and Sedona.”

Immediately after clearance and take off, Dodson handed the controls over to Romaniz. With Dodson navigating, the aircraft was expertly steered clear of cloudbursts, over the winding Colorado River and around red rock monuments like Courthouse Butte and Bell Rock.

By late afternoon, Romaniz had officially logged another 2.8 hours of flight training and had experienced the drafts and headwinds that come with canyon lands during monsoon season. “He was very steady and smooth, better than a lot of my students!” said Dodson.

“People really do believe in you,” Romaniz said. “At Buffalo Wild Wings, everyone is really supportive. They’ll push you to accomplish your goals and say, ‘You need a day off from work to do this for your education.’ They truly understand.”

Still buzzing from the Off the Clock experience, the Bradshaw Mountain High School graduate was handed a $1,000 check from Snagajob to put toward his higher education. He also received reimbursement for the day spent on fixed wings rather than hot wings.

“What Snagajob did for Carlos was phenomenal,” said Stancil. “If anybody deserves this recognition, it’s him.”

Solely dedicated to providing recruitment and hiring solutions to the hourly industry, Ridzon says Snagajob has more than 50 million registered job seekers and is the leading hourly-focused talent management system in the country. With its appreciation for workers and incentives like Off the Clock, it’s no wonder Snagajob has been named to both Fortune Magazine’s Great Place to Work Best Small & Medium Workplaces list and Deloitte’s Technology Fast 500 for the past five years.

“I just can’t thank everyone enough,” said Romaniz. “I used to want to be an anesthesiologist. But then I realized a doctor is responsible for one life at a time. A commercial pilot is responsible for hundreds of lives a day. I’m going to be a pilot.” FBN 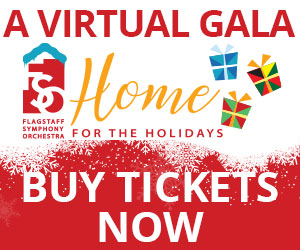 Marlboro Man in Action at the Grand Canyon

Some boys do grow up to be cowboys, and some cowboys even grow up to be Marlboro men. Such was the case for Grand Canyon National Park Service (NPS) Wrangler Ed Forbis. Born on a ranch in Deer Lodge, Montana, from the brim of his hat to his well-worn boots, Forbis is a genuine cowboy. His warm country accent and perfectly-shaped thick cowboy mustache portray the rough cowboy on a bucking horse that he portrayed in Marlboro advertisements. “I grew up living next to Darrell Winfield, who played the famous Marlboro Man for over 30 years,” said Forbis. “He was a horse trader and he’d have about 300-400 horses on his ranch.” “After I graduated high school, I went to ride colts for Daryl. He’d pick out young dummies like me to get on them brooks and break them in.” Further down the road, Forbis was hired by Marlboro to ride bucking horses as a stuntman for Marlboro advertisements and television commercials, a job that lasted 12 years. Footage of Forbis riding a bucking horse with a herd of wild stations not only became popular in the United States, but worldwide.

After almost 13 years on the Flagstaff City Council, I chose not to seek reelection. My current term ends this month, and as such, this will be my last article as mayor for the Flagstaff Business News.

Ten Years of Recovery Through Nature

For 10 years, Back2Basics Outdoor Adventure Recovery has been using the natural environment to help young men recover from addiction. The Flagstaff-based program engages men, ages 18 to 35, in a variety of wilderness experiences that are emotionally and physically safe, combined with more traditional therapies such as process groups and one-on-one counseling with a clinician.

This year has been one for the record books with chaos, division, fear and uncertainty unlike anything many of us have experienced in our lifetime. Anxiety is best defined as a fear of the unknown.