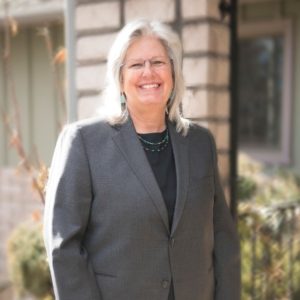 Lucinda Andreani is not your typical county public works director. First, she is a woman. Second, she is not an engineer. And third, she brings a more entrepreneurial edge to how she runs things.

She does not adhere to the status quo.

“I am someone who values diversity and a different perspective.”

Her approach to management is transitional, which creates positive change in followers to help them develop into leaders.

“I recognize and take the public service mission very seriously,” she said.

Staff members feel the same way. For instance, during the series of snowstorms in late January, the 10th largest storm in the area’s history, crews worked 12-plus-hour shifts for seven days to keep roadways clear.

“During that period, from the 19th to the 24th, it continued to snow,” she said. “It was a major event. It takes a lot of determination to have to show up and perform well.”

That determination is the kind of thing that gets people noticed. Andreani was promoted from deputy public works director a few weeks ago.

“The county is an organization I love. We are the boots on the ground of government.”

Andreani is well known for her extraordinary devotion to the county and her ability to tackle challenging situations.

“Lucinda is a dedicated public servant who responds quickly and professionally to serve the constituents of Coconino County,” said Coconino County Board of Supervisors Chair Liz Archuleta. “Her commitment to the residents during the Schultz fire and ensuing floods was extraordinary. She helped lead the effort to protect homes and resources and worked tirelessly to set up the flood control district so that damage from future flooding events would be mitigated.”

“It was the worst disaster that ever impacted the county,” said Andreani.

During the crisis, she jumped into action with a communications call center, providing information to residents and volunteers. The immediate task was to prevent damage by carving flood canals and installing concrete barriers.

“I had a pretty good understanding of communication during a disaster from my former job at a California utility where there were wildfires, earthquakes and flooding,” she said. “We had 35 flood events that summer.”

The county took measures to prevent such flooding to happen again. Andreani says watershed restoration efforts were accelerated in the aftermath of the Schultz fire.

“We focused on what we could employ for long-term mitigation,” she said.

Andreani also led the county’s awareness initiative about the need to repair and maintain highways. Voters approved a $30 million sales tax to keep the roads in good shape. “When we do our county surveys, we ask what is most important. Roads and road maintenance are at the top of the list.”

In her new role as Public Works director, Andreani is responsible for an annual budget of about $20 million. She manages many operations, including Road Maintenance and Engineering Divisions, and oversees a workforce of more than 110 employees.

“Lucinda is already deep in her work in strategy planning, new software and a new budget,” said Coconino County Manager Cynthia Seelhammer. “I’m looking forward to seeing her continue her excellent work with the county as Public Works director. Lucinda is a proven leader with the skills and expertise to manage any challenges we face.”

Andreani credits her grandmother for her strong work ethic. “She came to the United States from Italy in 1910 with the clothes on her back and a dream of a better life. She made enough money to bring over the rest of her family. When she married, she and her husband were successful running several businesses.”

She says she was close to her grandmother and very familiar with those “hard immigrant bones.”

Andreani has a Bachelor of Science in Natural Resources Management with an emphasis in Environmental Policy from California Polytechnic State University in San Luis Obispo, California. Prior to joining Coconino County, she was a leader in the energy industry, working with a major utility company and an energy corporation. She also has had her own consulting business, which served large energy users across the country.
Andreani came to Flagstaff for the environment, but, she says, she stayed for the people.

“One of the first people who pops into mind is Supervisor (Liz) Archuleta. She has a deep commitment for people and particularly those who may not be as fortunate as others. I think the level of service and commitment she makes to the county is pretty remarkable. When we were going through the floods and working 18 hour days, you have to look for inspiration and leadership. She stepped up. Afterward, she went after federal funds and negotiated agreements. You have to have a leader who does that. She would always come to mind. She is very inspirational to me.

I’ve been focused on leadership, looking at old and new methods. I’m a fan of transformational leadership.”

What is your secret to staying enthusiastic about life?

“Relationships with family, friends, colleagues and team members. You get out what you put in. That is where my motivation and satisfaction comes from.”

What is your super power?

“I think it is two things: I am really good at communication and vision and putting a plan together to implement the vision; and I am very good at connecting the dots and using the assets of all the people I know and relationships with them.” FBN