You are here: Home / Local News / Called to the Stage 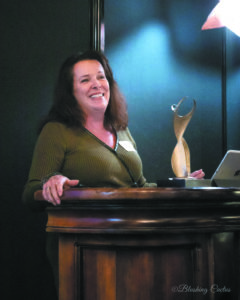 Stage actress Robyn Allen has spent more than 30 years in the entertainment industry, but says she had to overcome her shyness to perform.

“I was always very shy,” she said, “but if I had written a poem, I would just stand up and recite it in front of my relatives. I think that’s how they tricked me into auditioning for plays in school.”

Soon she found her own trick, which was to become completely immersed in the character and stay focused.

Allen shared her story with more than 100 people at the 2021 Prescott-area ATHENA Awards, Sunday, Sept. 19, at Goods from the Garden, where she was honored with the leadership award, sponsored by Quad Cities Business News and Prescott Woman Magazine.

“I was shocked and so honored to be a finalists alongside those women,” she said. “I really wanted to take a moment and learn who they were and what their journeys were that got us to this place.”

Allen, the executive director of Suze’s Prescott Center for the Arts (PCA) since 2016, is adamant that success doesn’t happen on our own. “It takes an enormous amount of support. We have hundreds of volunteers [at PCA]. I have an amazing staff and have always had a great team around me, supporting and surrounding me,” she said as she acknowledged her husband, Al, and thanked her team at PCA.

Besides acting, Allen’s career has included producing, directing and arts leadership. She received her education at Arizona State University under the direction of Marshall W. Mason and at the New Actors Workshop in New York. She served as artistic director of Theater Works in Peoria and was a founding member of the acclaimed Algonquin Theater Co., in Phoenix.

She has received 38 ariZoni nominations and 14 awards for her work in theater, including best director, best actress, best supporting actress and best guest artist. In addition, she has been featured in The Arizona Republic’s Who’s Who of Women in Theater.

One of her favorite productions was “Sweeney Todd,” for which she won an ariZoni Award for directing. Allen says her most fun experience was participating in a comedy horror film called “‘Netherbeast Incorporated’ about an undead telephone company staffed by flesh-eating, vampire-like employees. I worked with a lot of great comics in that film like Darrell Hammond, Dave Foley and Steve Burns. It was shot in Arizona.”

Most recently, under Allen’s leadership, Suze’s Prescott Center for the Arts received a nomination for the 2020 Governor’s Arts Awards, the 2020 Prescott Chamber Business Excellence in Arts and Culture Award and the 2020 Twink Lynch Organizational Achievement Award, on the national level. Noted in the Twink Lynch acknowledgment was the organization’s ability to redirect resources to create PCA Serves, which addresses the needs of the center’s mostly elderly patron population and served the broader community during the pandemic.

At the same time, the center had engaged in a capital campaign to build a new studio theater, and expand rehearsal and classroom space to better serve the community’s youth and create an additional art gallery. However, Allen says the campaign, “Setting the Stage,” was put on hold while the group focused on helping the community maneuver through the pandemic. Nonetheless, an anonymous donor came through, enabling the center to move forward with its expansion plans. As a result, PCA was able to break ground in July.

Allen was born and raised in Phoenix. Her husband grew up in Mayer. While visiting his family, she was introduced to Prescott and had always kept the idea of living there one day in her mind. The two made the move from Phoenix to Prescott in 2015. “Literally six weeks after I got here, the one job I do opened up at Prescott Center for the Arts. It fit like a glove.”

She planned to work as the interim director until they filled the position through a national search. “I fell in love with the community, the gallery, the center and everything about it.”

She decided she should apply for the job and the center agreed. “It’s just been go, go, go since then,” she said.

“I love everything about community theater, especially watching the growth of individuals and working with our youth,” she said. “The arts enhance a community. There really is something for everyone. You don’t have to be a performer, you can be active in other departments. We have opportunities for our youth to learn theater management and administrative skills. We need designers in lights and costume and enjoy teaching these skills to our volunteers. Community theater is a great place to get your feet wet. When I first started directing, I knew I’d have to learn how to do it all and you learn it quickly.”

Allen has been married for 34 years. She and her husband have two daughters and a son. FBN