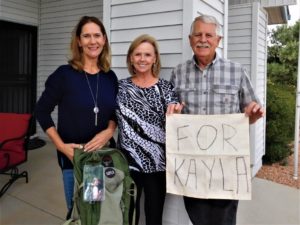 When Kathleen Delany went online to buy a used backpack for her upcoming trip to Tanzania to climb Mount Kilimanjaro, she had no idea it would become a life-changing event.

Delaney is an Arizona State University graduate and commercial airline pilot stationed in California. She moved to Prescott Valley in March 2021 after being put on leave because of COVID-19, and in the aftermath of a traumatic breakup with her boyfriend. The Phoenix native previously had bought a home there for her retired parents. She had no idea she would be living with them nine months later.

Delany, 53, explained, “After my breakup, I knew it was time for me to collect my thoughts and dedicate myself to a new future. I had dreamed of climbing Mount Kilimanjaro for more than 10 years. In 2010, I had visited Tanzania with a friend to celebrate my 42nd birthday. I’ve been an avid hiker since childhood. I have for years hiked the tallest mountains around me in Colorado and the Sierras.”

Delany decided she needed a medium-sized backpack. She looked online and found one she liked. She contacted the people who listed it, Carl and Marsha Mueller, who live in Prescott. She met them June 11, to examine the backpack.

She checked it, liked it, and bought it for $45. The Muellers told her it belonged to their daughter, Kayla, but said nothing else.

Delany had never heard of Kayla. Later, she would learn Kayla’s tragic story of having been captured in 2013 in Syria, held captive for more than 500 days and then murdered by ISIS terrorists in Raqqa in 2015.

Delany used the backpack for a few training hikes. One afternoon, while preparing the backpack for the Kilimanjaro trek she had scheduled for July, she reached into a pocket and felt something.

“I pulled out a worn but readable 2009 airline ticket receipt for Kayla Mueller from Phoenix to Atlanta and then Guatemala. My mom told me that name was familiar. I Googled it. When I saw who it was, I got chills. The hair on my arms was sticking up. The range of my emotions – intense. It hit me. I was meant to have this pack. I had a connection to this young woman who traveled the world making a positive difference in people’s lives, helping others, helping relieve suffering. What an incredible young woman Kayla was,” Delany said, wiping tears from her eyes.

Delany called the Muellers again. “I told them I wanted to dedicate the hike in Kayla’s name. We all wept. I asked if I could have something small and lightweight to take with me. I told them I truly felt I was supposed to take their daughter with me to the top of Mount Kilimanjaro.”

A few days later, Delany met with the Muellers. They gave her a laminated photo of Kayla, on the back of which was written:

Delany attached that photo and message to the rear of the backpack. The next day, she left for Africa. On July 3, she was in Moshi, Tanzania, near the equator. She was preparing for the hike, which was to begin the next day. The hotel manager asked who the photograph was. Delany told her the story and how she was dedicating the hike in Kayla’s honor. “Teddy gave me a large linen napkin. We used a black permanent marker to write ‘FOR KAYLA.’ We attached it to the backpack. People then would ask me who the picture was of and why the napkin. I told them the story and about my dedication of the hike to Kayla. Lots of tears were shed.”

Delany and eight companion hikers and several porters began the hike up the 19,341-foot mountain on July 4. “It took us seven days to summit Africa’s tallest mountain, so I shared the story of Kayla with everyone. We reached the summit. I made sure the backpack with Kayla’s photo and the napkin were prominent as we held them up in howling winds at sub-zero temperature. I sent that picture to the Muellers as soon as I could.” Delany said. “That experience was incredibly sensitive. I was able to shed the emotional baggage I was carrying while, at the same time, representing Kayla in my accomplishment.”

Kayla Jean Mueller was the second child of Carl and Marsha Mueller, born Aug. 14, 1988, in Prescott. She graduated from Tri City College Prep High School in 2007. She immediately enrolled at Northern Arizona University in Flagstaff. As an honor student, she earned a degree in political science in 2009, only two and a half years later. A committed Christian from early childhood, she was quite active in the ecumenical campus organization United Christian Ministries while at the university.

Still in college in early 2009, Kayla bought a ticket on Delta Airlines to Guatemala, where she and others with Campus Ministries immediately devoted themselves to helping children who were suffering from hunger and homelessness. She stuffed the ticket stub into a deep pocket of the medium-sized olive and pale green backpack she carried – and forgot about it. A four-inch oval black patch on which “KAYLA” was stitched in white identified the backpack as hers.

It was that ticket receipt Delany found 12 years later.

Kayla dedicated her life to the rights and dignity of oppressed people around the world, said some of her college friends. She worked in India, the Middle East, Israel and ultimately Turkey and Syria. She was considered an advocate for anyone who was suffering persecution or violence.

Delany, who has piloted commercial jets for several major carriers, is now back in Laguna Beach, California. She has been recalled by an airline. She reported that on her first night there, Oct. 17, she was sleeping on her air mattress in a small, vacant apartment when she awoke to the sound of an owl hooting early in the morning. “I knew from her parents that the owl was Kayla’s favorite spirit animal. I think hearing the owl my first night back is a sign from Kayla that everything is going to be all right.” FBN

For an extended video interview of
Kathleen Delany, go to
https://starworldwidenetworks.com/shows/bonnie-stevens.