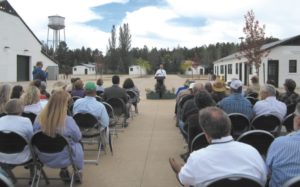 The Historic Fort Tuthill Quad, a celebrated site rich in history and significance for our community, was recently renovated with $4 million in improvements. To honor the successful completion of these improvements, Coconino County Parks and Recreation dedicated the Historic Quad on Aug. 15, and shared this momentous occasion with about 100 guests in attendance.

Among the community leaders and special guests at the dedication and ribbon cutting ceremony was Jim Warbasse, 86, who spoke about the history of the fort and his grandfather, Brigadier General Alexander N. Tuthill, for whom the park is named. The historic quad served as the annual field-training facility for the 158th Infantry Regiment Arizona National Guard from 1929 through 1948. It became a county park in 1955.

Tuthill had two careers, Warbasse said. “He was a highly regarded National Guard officer and a well-known surgeon in the Southern Arizona mining town of Morenci.”

He also helped General Black Jack Pershing chase Poncho Villa back across the Mexican border after raids inside U.S. borders, Warbasse explained. Tuthill and his National Guard regiment stayed behind to guard the border. General Pershing recognized Tuthill as the finest soldier on the border.

“I grew up in his household,” Warbasse said. “He was as rugged as the mountains in his state and you knew what he stood for, more importantly, what he wouldn’t stand for.”

Grandson Skip Lange said, “If it’s true the meek will inherit the earth, it will take someone like my granddad to show them how to run it.”

Warbasse said he never heard his grandfather raise his voice or use a curse word, but a person got the message when he looked at you with those “steely blue eyes.”

In 2002, Coconino County voters, through the County Parks and Open Space (CPOS) tax initiative, authorized the Parks and Recreation department to acquire open space, develop parks and make improvements to existing parks. The restoration of historic portions of Fort Tuthill was one of the projects identified on the ballot. The park was identified as the highest priority for a major upgrade in 2010. The county actively moved toward bringing restoration plans to fruition in 2015 by engaging a project team.

Peak Engineering, Kinney Construction Services, Inc. (KCS) and Construction Manager at Risk (CMAR) worked closely with the Coconino County Parks and Recreation department to meet the vision of the Coconino County Board of Supervisors. KCS is recognized for completing the $4 million project ahead of schedule and under budget. As shared by KCS Vice President Mike Thomas at the dedication event, “We utilized 100 percent local subcontractors, which translates to over 100 individuals right here in our community that were directly involved in this project; importantly keeping local dollars local.”

The Historic Quad now has new infrastructure, including water, sewer, electric, fiber and drainage. The renovation included new walking surfaces, landscaping, lighting and a public address system. Sandblasted into the new walkways are chevrons or military insignia tying in the military history of the fort.

“The dedication was designed to bring attention to the renovation of the grounds of the historic fort, built in 1929 for the Arizona National Guard training facility,” said Marilyn Hammarstrom, director of the Fort Tuthill Military History Museum. “I personally see this as a great honor for Arizona’s military and their families.”

An open house was held at the new museum in June before the Quad project was finished. “We are so pleased that the Coconino County Board of Supervisors put their hearts and talents into creating such a wonderful park in Northern Arizona,” said Hammarstrom. “It is so exciting to see the faces of our guests as they walk through the new Quad and museum. It is truly something to be proud of.”

The Fort Tuthill Historic District is on the National Register of Historic Places. FBN