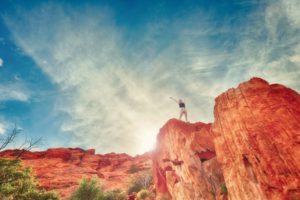 Blending with the dramatic red color palette of Bell Rock and Courthouse Butte that grace the background, The Collective in the Village of Oak Creek is a revitalized multi-use gathering space where residents and visitors can shop, eat, celebrate and just enjoy the natural beauty.

Thomas MacPherson and his Fenix Private Capital Group purchased the property last year after selling another project in Phoenix. “It’s a nice center, I love Sedona, and it’s a great place to spend time and money to build a very significant cultural and community entity,” said MacPherson.

The Collective is located on the plaza formerly known as the Tequa.

“I’m really optimistic and excited to feel the new energy. It’s almost like a rebirth. New things are coming,” said Sedona restauranteur Lisa Dahl, whose businesses include Cucina Rustica. “I have been waiting 13 years for cultural significance at the property. That was part of the Tequa plan and one of the main reasons I thought it was a good move to come out to the plaza. Four groups have come and gone and now we have Thomas,” said Dahl, who also ran a storefront in the plaza for a time called Aroma and calls MacPherson “a visionary.”

The Collective is intended to encompass a variety of food and beverage establishments, an eclectic collection of storefronts, from banking to yoga, art galleries and art installations, and indoor and outdoor event spaces for community and private events.

“It’s meant to be a place for everyone in The Village to go hang out, to have ideas and come up with new ideas,” said MacPherson. “Coming up, we’re holding a forum on the upcoming [Yavapai] county supervisor election, we have our farmers market running two three-day weekends a month, and we’ll have a Native American cultural center soon.” Recent events have included the kickoff of the Illuminate Film Festival and a summer moon dance.

Currently, he is focused on finishing Phase One of the property’s redevelopment, including finishing all deferred maintenance, programming all spaces and finishing build outs. Phase Two is focused on beautification, including an emphasis on sustainability; the property’s environmental impact is being lessened by the use of organic grass, and there are plans for a solar power array and a grey water system. This phase is also intended for organizational and operational improvements. Phase Three is a long-term effort to develop the dirt lot that remains on the internal southwest edge of the property.

Next to that space and behind Schoolhouse Restaurant (a tenant since February 2015 before MacPherson came in) is the grass courtyard utilized by the farmers market, the film festival and other events. Surrounding the courtyard are the interlinked Village Grind Coffee and Eatery and the soon-to-open J Wine Bistro, as well as an intriguing set of small, adjacent storefronts destined to be tasting rooms for local craft wine, beer and spirit makers.

Dubbed “The Producers,” this space is currently occupied by two tenants: Four Eight Wineworks cooperative of Clarkdale, and Historic Brewing Company/Grand Canyon Wine Company based in Williams/Flagstaff. Southern Arizona winery Flying Leap Vineyards has also signed on to join the space soon and more will follow.

“Everyone I talked to about taking part loves the space but has push backs,” MacPherson explained. “They wanted to see it when it’s done. Now that it’s done, brewers and winemakers are considerably more interested. The space will be more full by the end of summer and totally full by the end of the year,” he predicted.

MacPherson is seeking a Series 6 liquor license, making it easier for tasting-room and special-event guests to enjoy more freedom of mobility and use of the property’s common spaces.

Carole Kennelly, part owner of Historic Brewing Company, echoes an enthusiasm for the vision renewed by MacPherson. “Historic is very excited to be on the ground level of such an exciting project. Wine, beer, food, art? What more can you ask for? We, at Historic, value collaboration and community. The Collective is the perfect place for like-minded businesses to be a part of something greater than themselves. We look forward to being a destination for both travelers and locals alike.”

Big Park Regional Coordinating Council president Amadeus Larew says he is energized to see this commercial space becoming a more complete business and community hub. “It’s an asset for both residents and visitors to the Verde Valley,” he said.

The 6.15-acre, 54,000-square-foot Tequa Plaza originally opened in 2002 on the south end of The Village of Oak Creek and was negatively impacted by the economic downturn in 2008. Now, the future is bright.

What the Appraisal Process Means for You
Do You Understand Your Emotions About Money?