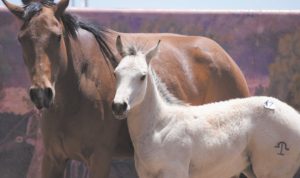 Amidst the crowd of several hundred spectators were Justin, Jessica and three-year-old Hud Greer. The Exeter, California family kept cowboy Scott Westlake busy keeping track of their bids in the Annual Colt Sale on Saturday, July 9. At the end of the day, the Greers were the event’s volume buyers, purchasing eight colts for Greer Livestock and ending the auction in a lively bidding competition for a sorrel colt at $15,500, a Babbitt Ranches record. Earlier in the day, they purchased the colt’s half-sister.

“These are good ranch horses and they are raised in pretty rough country similar to what we have,” said Justin. “We use a lot of horses and we’ve bought a lot of cattle from the Babbitts.”

Over the winter, the Greers shipped 600 head of Babbitt Ranches Hereford cattle to their G & G Ranches operation in California and 600 to Colorado.

Brian Kemp of Ontario, Canada was also an active participant in the crowd. “They’re all good,” he said after successfully bidding on five horses. Kemp has visited Babbitt Ranches six times. He has attended three Colt Sales, two as a buyer.

“It was outstanding,” said auctioneer Ron Burnt. “We had a really enthusiastic crowd. There were a number of repeat buyers and a number of new buyers, just a lot of energy from everybody.”

The 2016 Annual Colt Sale opened with a warm welcome from Babbitt Ranches President and General Manager Bill Cordasco. In memory of Fon Cordasco, Ranch Manger Victor Howell read a passage about attitude, which Fon shared at a Colt Sale two years ago. “I am convinced that life is 10 percent what happens to me and 90 percent how I react to it. And so it is with you. We are in charge of our attitudes,” he read.

The Annual Colt Sale began in the 1990s as a way to bring together the large Babbitt family and community through a traditional western ranch experience. Hundreds of people come to see the colts and fillies as cowboys on horseback bring them in across the vast expanse of Northern Arizona. Serious horse buyers travel from all over, even other countries, for Babbitt Ranches colts.

“Some may think the Annual Colt Sale is about buying and selling horses, but the Babbitt Ranches Community intention is much broader than that. It’s about sharing and participating, and being grateful for the day, the wide open spaces, the extended community, the grass-fed hormone-free premium beef barbecue and the opportunity to gather together,” said Cordasco.

Above all, the Annual Colt Sale is an opportunity to demonstrate and be mindful of Cowboy Essence, he added, which is a founding principle of The Constitution of Babbitt Ranches and is in everyone.

Babbitt Ranches horses carry the legendary Hashknife brand. A “hash knife” is a kitchen tool used for making beef hash. It has a half circle steel blade, attached to a wooden handle, that is rocked back and forth across cooked beef to create hash. However, the brand signifies much more. It originally belonged to the Aztec Land & Cattle Company, which operated in Northern Arizona from 1884 to 1902. It then became the property of the Babbitt family.

With careful consideration of pedigree, Babbitt Ranches has developed a successful American Quarter Horse breeding program largely from descendants of the early Hashknife horses and the Driftwood (champion rodeo American Quarter Horse) lineage. They have a worldwide reputation for being solid all-around ranch horses with cow sense that can work all day and maneuver across rocky terrain. With speed, looks, ability and a good disposition, the horses are often winners in the rodeo arena – from local high school competitions to world championships. Babbitt Ranches horses are said to be tough enough for the working cowboy, yet gentle enough for young cowboys and cowgirls. FBN