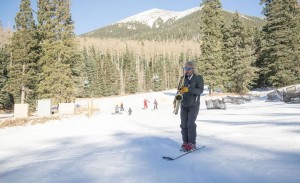 Among the restaurants, pubs, dog parks and street corners where Randall Boylan plays his saxophone, this avid skier can sometimes be seen and heard at Arizona Snowbowl. He will play in lift lines, on chairlifts and even while skiing, including over the bumps on expert black diamond runs. One of the challenges to playing outdoors at 10,000 or so feet is keeping the reed wet, he says.

And, although he has been knocked down “by a boarder,” he has never crashed the instrument.

Boylan plays the sax “to give love away” wherever and whenever the spirit moves him. “You usually get it back, but you have to give it away first,” he explains about love.

He tried to give it to Arizona Cardinals wide receiver Larry Fitzgerald during training camp in Flagstaff one season. “They were practicing and I was playing the sax on the sideline. He dove for the ball and caught it and I said, ‘Nice catch!’ And then he dropped it and I said, ‘Almost!’ He gave me a look and I started playing. He got irritated and threw the ball at me!”

Boylan had another experience with the Cardinals when the big bird mascot engaged in a dance with him. “He picked me up and swung me around while I played. The crowd loved it!”

Sax Man has proposed that the Cardinals pay him a million dollars to entertain the crowd; $900,000 of which he would give away to charity. But, so far, no deal.

Payment, he says, is not his motivation. In fact, he turns it down when offered and even discourages tips.

Boylan, or Sax Man, has long embraced his colorful, musical side. Born in Boise, he was heavily influenced by his aunt, who owned a music studio. He learned the drums first and then moved on to the saxophone. He struggled to learn to read music, so she worked with him to play by ear.

With his father in the construction business, the family moved all over the West. Boylan learned to ski at Lake Tahoe’s Heavenly Mountain Resort when he was six.

During the ‘80s, he moved to Flagstaff and worked in the construction business, designing and building houses in subdivisions such as Ponderosa Trails and Coconino Estates.

He also built a music studio where neighborhood kids could drop in and pick up an instrument. “Homeless people would come in sometimes and tell me they used to play the guitar. We had pianos, organs, recording equipment, I did it for fun.”

The studio was nicknamed “The Bat Cave” by his daughter, and friends soon began calling him Batman. It was there that he taught himself to tap dance, which he will sometimes include in his performances.

Today, the 60-year-old goes by many names: Sax Man, Batman, Tap Man, Ski Man, and Biker Man, but first and foremost, he says he is God’s Man. “God is first and last on my list.”

Boylan moved to Show Low a little more than a year ago to help his parents who are in declining health. But he continues to visit Flagstaff, and particularly the mountain, where he will trade a Kenny G tune or Christmas carol for a smile.

I admire people who are disciplined, especially professional athletes. Seeing how fast they really are and how hard they practice, they really do earn what they get.

I like Colorado, Idaho, Wyoming, Utah, California…all over the West. Our different states are like different countries to me. We speak the same language but the food’s different, how people think is different and how they talk – their accents – are different.

I play my flute, tap dance, ride the motorcycle. I don’t watch TV too much. I don’t own a TV and I don’t like being bombarded with negative information.

Last night. My buddy’s girlfriend gave me a Batman watch. That made me laugh.

One Response to Sax Man Bringing Music to the Mountain