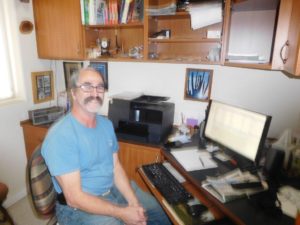 Two Prescott-based computer authorities are in absolute agreement about the need for exceptional caution about computer protections.

One – Edward Fisher, owner of Fisher PC Help – said this: “Be absolutely paranoid about your computer security.”

The second – Theo Soumilas, who owns Northern Arizona IT – put it this way: “We are at the point it’s no matter a question of ‘if’ but of ‘when’ your computer is hacked. It’s getting worse daily.”

Both Fisher and Soumilas are adamant that computer passwords need to be carefully determined and multi-layered. They also emphasize that, regardless of how tempting incoming messages such as “You’ve won an award” or “Contact this site to claim your prize” are, NEVER open a message if you do not recognize the source.

“Never respond to a pop-up,” said Fisher. “And if they keep coming up, turn off your system. Do not let them contaminate your files or get into your personal records.”

He also advises to shut down your computer at night when it’s not used. “That makes it less vulnerable.”

Soumilas put it another way. “You need to make cybersecurity a priority. A password alone is not enough to protect you. Passwords are created by people and are easy to crack. Using the same password over and over is a data breach waiting to happen. You really need two-factor authentication.”

He said multi-layered security approaches are even better, especially in business, and antivirus and antimalware software is needed for all computers.

Fisher said hackers are getting more and more aggressive and have everything to gain. They can make a lot of money if they successfully obtain access to personal files, especially financial ones, that people often keep in their computers. “They often live in Third World counties, so their native incomes are low. If they can hack into an account of someone here, they can make more in one successful incident than they could in a year at home. If you keep your bank records, bill payments or any other fiscal information that has your credit cards, bank or credit company accounts – any identifiable data that will allow them to find your personal files – you need absolute security.”

He also warned to be very cautious about Facebook, Twitter or any other social media formats. “That means the messages you receive and messages you send. They are open to almost anyone who wants to see them. That makes you a potential recipient of messages and pop-ups you do not want.”

A recent study published by Princeton University Center for Information Technology Policy reported that clicking in on Facebook may seem easy, but it is not necessarily secure. A security breach could put other accounts at risk.

“Do not disable your antivirus program – ever,” said Fisher. “Those programs are at work 24 hours a day to keep a virus and sometimes spam from inserting itself into your system.  Once that happens, the risk is that it will cause you to waste time and overwhelm your mailbox.”

Soumilas stated in an earlier QCBN column that spam filters scan email messages before they come to your computer. They not only repress spam emails but can also stop a virus from intruding.

Beth Fisher and Soumilas have years of professional experience in computer and information technology.

Fisher, a native of North Carolina, spent more than 12 years in the U.S. Navy in both active and reserve duty, where he was involved in air security. He has a college and university background, and currently teaches at Yavapai College. He, his wife and two children currently live in Yarnell. “His computer knowledge is excellent,” said YC Dean John Morgan. “He has taken the program to new heights because of his computer knowledge of simulation.”

Soumilas is from New Jersey but has been in Arizona most of his adult career. He had owned a high tech and computer company in Phoenix for 15 years but opted to move with his family to Prescott several years ago, where he started his current business. Soumilas earned a degree in computer sciences from the University of Phoenix. He serves almost 400 clients throughout the Quad Cities area and Central and Northern Arizona. FBN