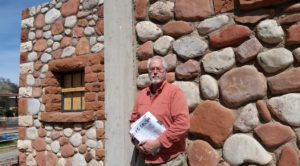 The historic Cottonwood Civic Center may soon be full of life with weddings, school plays and community meetings when the city’s renovation effort is completed.

The project got a boost from the Arizona Department of Environmental Quality (ADEQ) when the city was awarded a $37,734 Brownfields Grant to revitalize the Old Town area by performing asbestos and lead-based paint abatement on the Cottonwood Civic Center.

Brownfields are abandoned or underused and potentially contaminated commercial or industrial properties. According to Caroline Oppleman, ADEQ public information officer, these properties are the result of historic operations that occurred before today’s protective environmental regulations.

The Cottonwood Civic Center was constructed in 1939 using concrete columns infilled with river rock from the Verde River a half-mile away, and Sedona red rock for the window surrounds. Asbestos was utilized in electrical wire coatings, floor tile adhesives and some of the plumbing coatings.

“I think this is fairly common for buildings of this era,” said Charlie Skully, City of Cottonwood long range planner. The asbestos and lead-based paint were identified in the environmental review process that was a precursor to the construction renovation located in the Cottonwood Commercial Historic District.

A trailer-load of asbestos was removed from the premises by a team of certified hazardous materials (HAZMAT) technicians in March. ADEQ provided funding and the contractors for the HAZMAT removal. “They went through and removed or sealed up the asbestos following federal guidelines,” said Skully, project coordinator for the Civic Center historic renovation. The lead-based paint that was found in a scattering of minor applications was removed or sealed.

In addition, the glass from the windows was taken away because the original window caulking contained asbestos. The historic metal frames that held the glass will be filled with laminated low-E glass for energy efficiency. The swamp coolers that had been retrofitted into the prefab window frames have also been removed. “They were noisy and disruptive of performances and meetings,” explained Skully, a member of the American Institute of Certified Planners. The swamp coolers will be replaced by air conditioning that is part of the new HVAC system.

The new architectural plans were designed by Stroh Architecture, Inc. and Otwell Associates Architects, both of Prescott. “They are some of the most experienced preservation architects in the state,” said Skully.

Plans include ADA-compliant bathrooms, a redesigned larger lobby with drinking fountains and a lift to the stage for ADA accessibility. The current kitchen will be freshened up as a “catering kitchen,” retaining the original porcelain-covered cast-iron sink and cabinetry. The planners wanted to preserve the original purpose of the kitchen space but to reuse it as a clean, maintenance-free area to setup food prepared elsewhere, and thereby eliminating the need for stove or dishwasher.

A new sprinkler system for fire suppression necessitated adding a six-inch water line from the street. The City of Cottonwood took advantage of the waterworks to add a fire hydrant, which delighted the neighboring businesses. The antiquated T-bar drop ceiling will be removed, and the old ceiling will be restored. New dimmable LED pendant lighting will be installed for energy efficiency.

Currently, the facility has no permanently-wired IT infrastructure, something that is necessary for modern meeting facilities. By adding wireless Wi-Fi, charging stations and an audio-visual package for performing arts and meetings, the facility will become an attractive venue for meetings situated in Old Town Cottonwood, which has a plethora of restaurants, wine tasting bars and other entertainment places. However, the IT upgrades are not totally funded yet.

Cottonwood was one of several Northern Arizona communities to be awarded an ADEQ Brownfield Grant in recent months. The Town of Camp Verde’s old library building and a fire station in Lake Havasu have undergone asbestos and lead-based paint abatement funded by Brownfield Grants.

The ADEQ grant was only one of four funding sources for the project. Cottonwood Mayor Tim Elinski, who advocated for preserving Cottonwood’s historic buildings while serving on the Cottonwood City Council for 10 years, helped find funding for part of the Civic Center project.

“I formed the Historic Preservation Commission in 2011 to create awareness of our community’s historic resources, and we have done a lot to promote and share our rich history,” explained Mayor Elinski, who in the spring of 2014 spent a week of his own time as a licensed general contractor to remodeling the front lobby of the Civic Center to showcase the building’s beauty and highlight its potential. “In fall of 2014, a fellow commissioner and I planned the Inaugural Cottonwood Historic Home and Building Tour, and we dedicated the proceeds from the event to the Civic Center restoration effort. The Historic Preservation Commission also worked together to apply our local Landmark status to the Civic Center, the first building in Cottonwood to receive this status. This growing momentum was enough to convince council to apply our share of the Community Development Block Grant money to the Civic Center, and in 2017, as mayor, I was able to secure an additional $220,000 from the County Board of Supervisors to supplement the overall cost of renovation.”

The city now has more than $700,000 in grants and city funding sources, which include two Community Block Grants, the ADEQ Brownfield Grant and City of Cottonwood funding for the HVAC system. Some of the Community Block Grants are based on federal funding for rural communities with populations in need. So many of the improvements have seniors’ and low-income residents’ needs in mind, says Skully. Cottonwood was one of the only towns to qualify for the funding aimed at community facility improvement in towns with a high percent of low-income population.