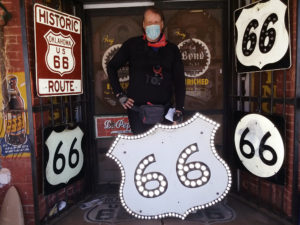 It was a winter of discontent, as the COVID pandemic began to peak in January, followed by the Polar Vortex storm that hovered over much of America in February, shutting down electrical grids from Texas to much of the Midwest.

At this historic moment, journalist and author Michael Sean Comerford, 62, had a dream: to record this unprecedented year as it unfolded.

“Bicycling along Route 66 is slow. Everywhere I stop, I interview people about COVID. By March, we were going to cross the milestone of a year since the CDC declared COVID a ‘pandemic.’ We were heading toward 500,000 reported COVID deaths. Milestones were going to be marked while I was on the project if I left immediately.”

Leave immediately is what Comerford did, departing in the snowy last week of February from Chicago on a mission to gather stories about the pandemic as he rode his bicycle 2,500 miles along the U.S. Route 66 corridor.

“I made a snap decision to go,” he said, equipping himself with a military-grade laptop, a Nikon Z50, a minus-15-below sleeping bag, a four-season tent and a lot of batteries.

Last, he “bought a $200, 40- to 50-year-old Panasonic Sport LX [bike] from a Polish immigrant in the Northside of Chicago from a Craigslist ad,” he said.

His plan was to interview people in the small towns and urban centers along the “Mother Road,” videotaping their widely divergent stories and opinions and dubbing his project, “The Story Cycle.”

Interviews were shared on YouTube through a partnership with the University of Florida’s Samuel Proctor Oral History Program.

The journey would take him through Illinois, Missouri, Kansas, Oklahoma, Texas, New Mexico, Arizona and California.

It ended May 10, after 75 days and 100 interviews, under the “End of the Trail” sign on the Santa Monica Pier.

“Through Arizona, I rode through Lupton, Sanders, Chambers, Holbrook, Joseph City, Winslow, Winona, Flagstaff, Parks, Williams, Seligman, Kingman to Oatman,” he said. “In Arizona, I met hotel owners who were taking in long-term residents to make up for the lack of tourism. I saw lines in front of Walmart and home supply stores and upscale grocers.”

He noted that many people said they were saving a lot of money during the pandemic.

“As for the business side of The Story Cycle, business owners should know that some people are suffering a complete collapse of their finances, but many are saving money for more purchases as things open up. There are reasons for optimism, and people are proud to be survivors.”

He also observed pent-up economic energy among most of those he interviewed and a desire to return to normal.

“The whole project is about how people ‘adapt’ to COVID,” he said. “So, new and small businesses are doing the same. Zoom meetings were the norm. Some businesses invested in new air-flow systems. I found hundreds of variations in the signs I saw outside retail establishments, as people found creative and courteous ways to say, ‘Please wear a mask and socially distance.’”

“Several people started businesses after losing their last job. I’m betting that many people want to return to work but to a job they can feel passionate about – more fulfilling.”

Responses changed as the year progressed.

“In February, the vaccines were rolling out, but COVID deaths were spiking,” he said. “In May, vaccinations were slowing down, COVID restrictions were lightening, and the CDC said vaccinated people don’t have to wear masks inside.”

As the economy rebuilds, Comerford reports some businesses, like bicycle shops and home building stores, are doing much better. “There’s a shift in the economy and it’s difficult to understand yet if it is permanent.”

Comerford is a former international journalist who has worked in Chicago, New York, Budapest and Moscow. He also is the author of “American Oz,” which chronicles his adventures living a year with carnival workers.

The idea for The Story Cycle came during a dinner in Chicago with two-time Pulitzer winner Paul Salopek, who is working on a project to trace the migration of humankind from the first known existence of humans in the Rift Valley of Ethiopia.

The two men talked about “slow journalism,” a news subculture that places value on taking time to report the news with depth and detail.

Comerford will take time now to analyze what he captured.

“Most people lamented what COVID has done to small businesses, restaurants and the service industry. Several people saw the good in the year. People were taking up hobbies such as painting and gardening. Most parents were parenting more. Many people liked working from home.”

This summer, Comerford plans to produce a documentary and book from the journey. FBN