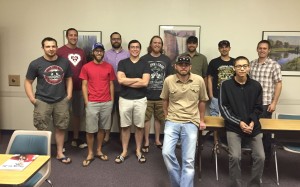 According to the course description on the registration page, “This nationally acclaimed ‘best practice’ program helps equip expecting and new dads with the basic skills and confidence they need to bond with their infants, support their partners, provide a safe and healthy home environment for their new family, and enjoy the process of transforming into a father.”

In 2013, FMC took over the Boot Camp for New Dads program from Coconino County. Today, this free, dads-only program is offered in partnership with the Coconino County Public Health Services District. In addition, the class is funded through a grant from the Exchange Club of Flagstaff. Grant money provides FMC with a lifetime license for the program and training for a master coach. Also, funds enable the purchase of simulator dolls that demonstrate to the dads the serious and even fatal effects of shaking a baby, as well as the harmful effects of drug and alcohol use.

“We measure success on the confidence our dads have when they leave the class,” explained Autumn Argent, Childbirth Education coordinator. “We hand out surveys and also ask veteran dads to return to share their experiences.”

Recent graduates, whose names are protected information due to HIPPA policies, have high praise, which is included on the program website:

“The Boot Camp for New Dads provided a laid-back atmosphere in which the instructor not only followed thorough guidelines but also asked the group what we most wanted to learn.”

“The Boot Camp for New Dads really calmed my fears about helping mom and baby. I recommend this class to all expecting and new dads.”

“It’s good to finally have a class for guys!”

The master coach for the class since December 2013 has been Zak Farmer, a part-time health care technician in Behavioral Health Services at FMC, who has also been devoted to rock climbing for 20 years. 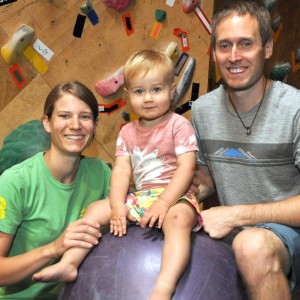 Farmer noted that a common trend in the class usually lumps new dads into two categories: those who chose to come, and those who were signed up by their partners.

“Regardless of the method of their arrival, the outcome is usually the same – engaged fathers looking to be the best father they can be,” he observed. “I happened to be one of the dads who was enrolled by their partner. I thought it might be a good class, but arrived like many others with passive indifference. I mean, what was there to learn, I was going to be a great dad. That indifference turned to passionate engagement.” Rachael Farmer said her husband learned a lot of useful tips from the class, plus he ended up using some of his own ideas during the first months of raising Ellie.

“I think that he figured out new techniques for getting her to bed that I hadn’t thought of,” she said.

One of those was using the Ergobaby carrier to get her to fall asleep while he carried her around, before putting her to bed.

In fact, keeping a child safe when they sleep is one of the focuses of the Boot Camp for New Dads program.

“The largest danger in the household is the child’s sleeping arrangement,” the instructor said. “We emphasize safe sleeping with a child sleeping on their back and with nothing in the sleeping area that can accidentally cover their airway.”

New dads can also help moms by removing some of the dangers that face the child inside the home, such as choking hazards, chemicals or sharp objects and any other objects that are potentially dangerous.

They can also play an active role in making the process of breast-feeding, which has many health benefits, easier and more comfortable for their partners.

In fact, supporting their mates should be the primary emphasis for the new dad.

“This is a common concern amongst new dads,” Farmer said. “A lot of what the mother has to go through is completely foreign to us as men. While we want to be helpful to our partners, we sometimes fall short in understanding their needs. Understanding the physical and emotional experience before, during and after the birthing process gives men the tools they need to be a supportive partner. This, however, is a temporary phase and successful parenting requires more than just one partner taking care of the other.”

In general, parents should view their partners as part of a team.

“It is this team that can ride out the difficult and stressful times,” Farmer added. “It is when that team is tested, whether it is stress or sleep deprivation, that things can begin to break down.”

Farmer said dads in the classes come from different backgrounds and cultures.

“Some dads have helped with younger siblings and been around kids all their life, and others have never seen or held a baby before,” he said.

“Regardless of the differences in questions, they all arise from the same place. As dads and parents, we are uneasy with the unknown. There is an impossibly vast amount of information to try and learn as a new parent and no matter how prepared we try to be, there is always a feeling that you don’t know as much as you should.”

He said most educational classes are geared toward the new mother, so this class is unique in reaching out to the dad-to-be.

Farmer, who moved to Flagstaff with his parents when he was two and is a graduate of Sinagua High School and NAU, thinks the role of veteran dads is critical to the success of Boot Camp for New Dads.

“The class is designed to bring dads back to the classroom once they have had a few months in the trenches with their kid,” he explained. “The real world and fresh experience these dads have is invaluable to our new dads. Instead of standing in front of the class and lecturing, the class is more of an open discussion between veterans and rookies.”   The next Boot Camp for New Dads is Saturday, Aug. 8, from 9 a.m. to noon.

If registering for a class less than a week before it is scheduled to start, contact the Childbirth Education office before registering online to make sure there are still seats available.

After registering, you will receive a call within 48 hours confirming your seat in the next class, as well as receiving in the mail the required educational materials. FBN