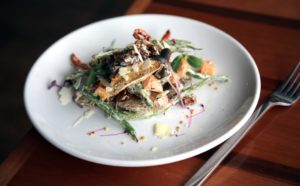 Every year, Baum+Whiteman, International food and restaurant consultants, publish a “Hottest Food & Beverage Trends” forecast for the nation. We at Flagstaff Business News wanted to see how Northern Arizona restaurants stack up to the national trends. Here are a few of the consultant’s forecasts:

Baum+Whiteman says vegetables will extend their domination of the dinner plate. Evidence of Flagstaff’s veg-centric dining can be seen at Shift Kitchen + Bar that offers vegetable-filled plates that change seasonally but could include the Warm Brassicas Salad or an All-Farm dish that features greens from a local farm, red kale, chard and garlic. You may add a duck egg for $3, (The restaurant also offers fish and meat dishes.)

Root Public House, a recent arrival in Flagstaff, seems to be latching onto the vegetable-forward concept with small plates such as Hoppin’ Jack blacked-eyed peas, blistered Shishito Peppers and Roasted Vegetable Salad pushing the fish and meat suppers to the bottom third of the menu.

Roasted peppers are also making a play on appetizer lists at places like Buster’s in Flagstaff and Salt Rock Kitchen at Amara Resort in Sedona, which also offers a fun spin on the vegetable trend with a make-it-yourself Guacamole Kit.

The report states, “It is no secret that Americans are eating less meat (26 percent of consumers said so last year) … that vegetarian/flexitarian diets [are] going mainstream … and that vegans increasingly are gaining respect.”

Baum+Whiteman calls establishments that marry an artisan butcher shop to a restaurant “resto-butchers.” There, you can buy the raw cut of meat and take it home or have the chef cook it up and serve it on the premises. There are butcher-to-table establishments in Baltimore, L.A., Montreal and New Orleans, but they should have named Proper Meats + Provisions in their report. The Flagstaff artisan butchery contains a 10-seat eatery and offers creative cuts of meat. The Arizona meatery showcases farm-raised meats, poultry and cured products.

Breakfast is the New Brunch

The report points out that breakfasts, once with smooth and soothing textures, are trending to include crunchy and crispy bites of fried chicken, chorizo and coarse whole-grain cereals. “The national obsession with fried chicken has invaded formerly soothing breakfasts,” the experts detail. Flagstaff is again on top of things with Field House Chicken and Waffles, where guests can order fried chicken for breakfast, brunch or dinner. Another breakfast trend is portable breakfast sandwiches. Macy’s European Coffee House serves its version on a croissant. Twin Arrows offers the Double Arrow Breakfast Sandwich with two eggs, cheese, tomato and bacon. In the non-portable category, the connoisseurs say to watch for elaborate breakfast tacos stacked high with artistically plated eggs, pico de gallo and carnitas or chorizo.

“It looks like the dreaded kale has reached its peak,” states the report. It projects that seaweed and squashes will take its place. The report also points out that in the new “waste not” economy, more chefs are using the previously discarded beet greens, chard, turnip greens, carrot tops, etc., which may be taking the place of kale.

“Chefs will be pickling these things and using them as condiments,” states the study. That is already happening in Northern Arizona. “Our ‘War on Waste,’ includes pickling vegetable flotsam,” said Dara Rodger, co-owner and pastry chef at Shift Kitchen + Bar. Copa Café also pickles and cans vegetable items as well as greens and flowers foraged from the surrounding Coconino National Forest.

Ice cream precariously piled high with cake, donuts, pretzels and/or candies until they’re ready to fall over are called “Freakshakes” and the more than 37,000 pictures of them on Instagram prove that they are all the rage. “They cost between $12 and $15 … more if boozed up,” reveals the report. Although this trend has not yet reached health-conscious Flagstaff, the consultants also say to watch for new savory flavors added to ice creams and ice pops. Crema Café in Cottonwood has long been offering gelatos with locally-grown French pumpkins, sweet potato and basil. The young cook at Flagstaff Terroir makes innovative frozen delights with sorbet and custard made with a reduction of the dessert sherry.

“According to Innovative Market Insights, use of cayenne pepper rose 47 percent in global product launches last year,” says the report, which goes on to say that many vibrant spices like chilies, tamarind, lemongrass, turmeric, ginger, coriander/cilantro, cardamom, kaffir lime, cumin, cinnamon, cloves, caraway, mustard seed, shrimp paste, sharp citrus juices and zests will be trending upward in 2017. They are also showing up in bottled beverages and cocktails. Spices are used by Flagstaff mixologists at places like Tinderbox Annex (Ginger Mint Julep), The Commerce (Honey and Knives made with serrano-infused tequila, grapefruit and ginger syrup) and Silver Pine Restaurant and Bar at Little America (Mesa Oasis, a rum drink mixed with pineapple, jalapeno syrup and cilantro). FBN

Creating the Optimal 2017
Serving Up Coffee and Tech Service