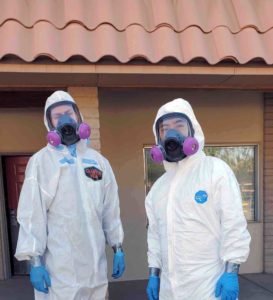 Hitting with a vengeance, COVID-19 made its first frightening appearance on the Navajo Nation in mid-March and quickly grew in magnitude, as limited health facilities on the reservation shifted into high gear and were rapidly overwhelmed.

By October, more than 10,000 people had been infected and weekend lockdowns were among the strictest stay-at-home models.

Many factors have contributed to the spread of this deadly disease on the Navajo Nation, including the vast distances and inadequate infrastructure that make access to health care difficult.

Other conditions have made it hard to control the virus, such as the lack of running water and electricity in many Navajo homes, as well as cultural traditions that favor large family gatherings and tight-knit communities.

In the summer, when the disease was spreading rapidly, the plight of the Navajos caught the attention of leaders in a company in a distant state who delivered a call to action to employees.

Workers from Southern Solutions Environmental (SSE), a Tennessee-based company, touched down in the Navajo Nation in June to begin the challenging job of decontaminating spaces across the reservation, with the goal of slowing the spread of COVID-19.

Members of the SSE team have been living on the Nation ever since, concentrating their work in the communities of Chinle, Tuba City, Shiprock and Window Rock, as well as Gallup, on the edge of the reservation in New Mexico.

Southern Solutions provides services to many clients across the nation and uses proprietary cleaning products and professional machinery and tools to disinfect businesses, schools and government facilities in the battle against viruses and other biohazardous substances.

SSE Senior Vice President Collin Anderson discussed the company’s origins, “Southern Solutions was started before the pandemic in November 2019 as an environmental services company by Ike Hawkersmith, who owns other companies, including a family business going back 30 years,” he said. “As the pandemic began to take hold of the world, Ike decided to refocus on decontamination work because of the need to protect public and shared facilities.”

Company President and CEO Ike Hawkersmith worked in tandem with David Barnes, who is in charge of SSE operations, marketing, sales and business management, to realize the mission of traveling to the Navajo Nation to fight the spread of the virus.

Between the two men, “SSE had all the drive necessary to make the leap of faith across the country,” Anderson explained. “Ike has been very concerned with this humanitarian crisis since the beginning, and has made every move possible to help those who need it. David shows his intelligence by ensuring that the systems we create for the Nation can be easily transferred to the control of separate organizations.”     Although SSE is “relatively new on paper, it is made up of a crew that has been with Ike for many years,” he added.

The skill levels and sophisticated techniques honed at the environmental services company in Tennessee proved valuable against the pandemic among the remote Navajo communities. “We have seen a lot of need when it comes to responding to emergencies, and we think we can play a positive role in situations that require immediate response,” Barnes said.

Anderson, Hawkersmith and Barnes are members of the extended SSE project team, which includes people from Nashville, Tennessee; Las Vegas, Nevada; Tacoma, Washington; and members of the Navajo Nation.

Living arrangements have been challenging. “So far, we have been utilizing our own trailers and RVs,” Barnes said. “For the first few months, we lived on a dirt lot in Chinle, Arizona.”

He says the disinfecting products workers use are unique. “We use a product called D7, created by Decon7 Systems in Scottsdale, Arizona,” Barnes noted.

Before being cleared for work on the Navajo Nation, crewmembers submitted a letter of physical fitness from a physician. Required tests included spirometry testing and an active and passive respirator fit-test. In addition, employee vital signs are being tracked throughout the workweek, Anderson said. “Workers wear full coveralls, which have built-in head and feet coverings as the basic line of defense to prevent viral contamination of employees.”

While on the job, each SSE worker wears a full-face respirator with biological and chemical protectant filters.

“We follow all relevant guidelines regarding donning and doffing equipment, including personnel decontamination procedures to ensure safety after job completion,” he said.

Technicians use a spray gun to distribute the disinfectant, much like a car painting set up.

“By aerosolizing the decontaminate, we create an atmospheric bombardment that effectively sterilizes the entire space,” Anderson said. “It’s a lot faster and more efficient.”

SSE officials say future SSE initiatives on the Navajo Nation will focus on a bio-security approach with decon spraying and atmospheric bombardment, not only to eliminate known contaminants but as a measure to stay ahead of the contagion risks.

While most actions have served as defenses against the virus, “our decon service is the most ‘offensive’ action we can take in fighting the virus, until we have a sold vaccine,” Barnes added. “We believe that if people see what we’re doing and understand better what we’re doing, it will be adopted by more people and ultimately we hope local, as well as state and federal governments, will adopt our method as an important weapon against COVID-19 and other potential threats to bio-security.” FBN