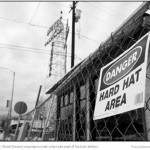 For anyone not from Flagstaff – especially those from big cities to the east – the idea that there is a north side, a south side or an any side at all to this city might seem strange. In fact, Flagstaff is made up of many different neighborhoods, each with its own unique character. That may be particularly true of Southside. Bound by railroad tracks to the north and NAU to the south, it is a distinctive mix of pizza parlors, inexpensive hostels, brew joints, and eateries that are as different in character from Flagstaff’s main business district as the two rims of the Canyon. Preserving its quirky, eclectic, and historic character is an important focus of redevelopment efforts for both residents and City officials, but economic vitality, safety, and residential improvements are also strong contenders. Controversies about re-channeling the Rio de Flag and federal stipulations about what a business owner can and cannot do with a property make that area “just over the tracks” a contentious place indeed. How ongoingand future redevelopment will help or hinder businesses and residents is also an open matter.

“The pie is only so big,” said Kirk Hindman, owner of Monsoon Downtown. Significant economic redevelopment on the Southside “might lower our rent,” he says, but won’t have any other real effect on his business or on Flagstaff. “There are only so many people who eat out here,” even with increases in overall business during tourist months. Yet, “unifying downtown Flagstaff is seen as desirable,” according to Karl Eberhard, city architect and historic preservation officer of Community Design and Redevelopment.

Karen Kinne-Herman believes that Southside is already a vital part of downtown, and that redevelopment will benefit all of Flagstaff. “Southside has deep roots – with businesses and families that go back generations. I think that redevelopment will give visitors a chance to enjoy its diversity – from historic businesses like Macy’s to Beaver Street Brewery’s new expansion.” Kinne-Herman and her husband, Maury, own a number of Southside properties, including the lease on the current Beaver Street. Despite recent closings of some businesses, others are moving in.

“It’s a big part of our world,” said Richard Bowen, vice president of sustainability and economic development at NAU, so any redevelopment plans for the Southside are of high interest to the university, which sees great potential for enhancing NAU’s character and reputation.

But challenges exist. Because Southside sits in a flood plain, owners must adhere to development restrictions. Improvements to existing buildings must comply with federal standards requiring structures to be three feet above flood level. The cost discourages some owners from making needed improvements. Rechanneling the Rio de Flag will “be a significant help for property owners to facilitate and promote re-investment,” said Eberhard, because it will remove the floodplain and lift federal restrictions.

Bowen cites market forces and improvement of streetscape as more significant factors. “It’s an appearance issue,” he said. Preserving the unique character of the downtown and the residential nature of the area alongside of vital businesses are key to the future of the area. But, if restrictions on business development are too strict, he notes, “businesses will go elsewhere.” FBN