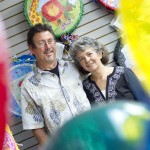 His title barely fits on his business card, but then again, as the city’s new “Manager of Enhanced Service Districts for the Downtown and East Flagstaff Area,” Steve Saville has under- taken a big job.

He has been tasked, for at least the next 36 months, with bringing comprehensive management plans and providing solutions to the issues of Downtown, Fourth Street and the Sunnyside neighborhood business districts.

“This is a true private, public partnership between the Downtown Business Alliance, the Sunnyside Neighborhood Association and the Southside Community Association,” Saville said.

“We are ecstatic about it,” said Sharlene Fouser, who owns the Confetti Party Store on Fourth Street. “Steve has his finger on the pulse of the community and he is a long-time resident involved in everything from politics to volunteer organizations and the community. He knows everyone and everyone knows and trusts him. He has wonderful ideas and is the perfect person to lead this initiative.”

Fouser said that many of the business owners have full-time jobs in addition to running a full-time business. “We can’t be everywhere. We can’t be at every city council meeting and make our voice heard. Steve will be that person to keep us informed and take information back to city leaders. He is a wonderful addition.”

Fouser said that in the past, the business owners in her area have felt neglected in favor of the Downtown area, but she thinks that is no longer the case. “I think our city leaders have done a great job and our initiatives are moving forward,” she said. She said sometimes area business- people think that things are not moving along fast enough, but she believes they we are on the city’s radar. “Karl Everhart, who is in charge of economic vitality, has been just wonderful in making sure things move forward for us. Part of it was getting a plan in place,” she said.

In the past, things have been handled haphazardly, but now, priorities have been identified, allowing the plan to move forward logically, she says. Ginger Hogden, owner of Shear Perfection beauty salon on Fourth Street for the past 23 years, said she is happy about Saville’s hiring. “I think it’s a great idea. Fourth Street has fallen behind because Downtown has really grown and there are a lot of businesses on the other side of town,” she said. “There are a lot of good businesses and I think a lot of people don’t know we are here. We can use all the help we can get.”

“If it can help me out, it would be great,” said Tony Florez, owner of Tony’s Barber Shop on Fourth Street. He said he has been in business for 22 years and that most of his customers come to him from word of mouth.

“Any concept that helps people live better in Flagstaff is a good idea, including helping businesses and the people who patronize them,” said Alexis Johnson, owner of Late For The Train Coffee on San Francisco Street and several other locations. He added that he thinks it is the smaller businesses that need help, as opposed to the larger ones.

“I think it is a great idea on the city’s part that they have a downtown manger,” said Nonette Saville, owner of Brookside Chocolate Company in downtown Flagstaff. She is also Steve Saville’s sister-in-law, and was called randomly for a comment on this story. “I think Steve will be great. He has a lot of people to meet and situations to deal with, but he will do great,” she said.

“The main issues of downtown are parking, crowd management at regular events, keeping the downtown area clean and attractive to continue to draw tourists, sales and sales tax revenue to the area. The east side does not have a parking problem, but it does have many opportunities for marketing its charm with attractions, events and the vibrant businesses. The major opportunity is redevelopment and improving the economic vitality of the area,” said Steve Burke, city manager. One of the pluses is plentiful parking.

Burke said the decision to hire Saville was the culmination of the completion of the Downtown Marketing Plan and the Fourth Street Corridor Study that is in its final stages. Both of the entities were on different tracks, he said. “They both got together and said, ‘what if we did a partnership?’ It seemed like a perfect way to leverage resources and accomplish lingering goals,” he said. “Steve is the perfect fit for this position.” FBN