You are here: Home / FBN Spotlight / Draytons Continuing the Brandy’s Tradition of ‘Doing it Right’ 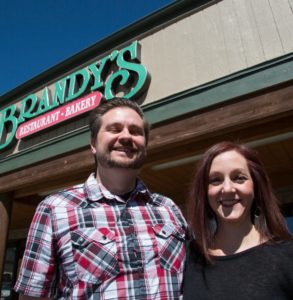 Walk in the door and aromas hit you. Your mouth waters. Bacon sizzles on the grill. Fresh pastries brown in the oven. Savory and sweet mix with the smokiness of freshly brewed coffee.

It is a comfortable place, with locals and visitors gathered in a loud mix of laughter and good conversation. And the food is just as comfortable – eggs, homemade bagels and pancakes along with a … chutney melt. There is a flair of experimentation here as well.

Brandy’s Restaurant & Bakery has been a staple of breakfast and lunch fare in Flagstaff for nearly 25 years, and co-owners Kelsey and Jamie Drayton want to keep the recipe of success going.

The couple bought the restaurant in 2014 from longtime Flagstaff residents and restaurant owners Ed and Brandy Wojciak.

“We both wanted to be our own bosses,” Kelsey said. “It’s definitely where we should be.”

Jamie added, “It’s given us the life we want.”

Kelsey started at Brandy’s when he was 15.

“And I worked here until I graduated college,” Kelsey said.

He never considered that he might be owning the restaurant one day, but that is just what happened. Jamie, on the other hand, was a bit different. When she was a child, she would play waitress and office, both of which have come to suit her well in her role as co-owner. She would even make her grandparents tip her when she played waitress with them.

“I guess the moral of that story is ‘be careful of the games you play as a kid,’” she said with a laugh.

The two began dating while in college at Northern Arizona University, and they both headed out to Los Angeles after graduation, where they continued to date. After they were married, they decided to move back to family in Flagstaff. They now have two daughters – ages five and one.

At the same time, Ed and Brandy wanted to retire and helped the young family in the purchase.

The business and their interests are people-oriented. They are “numbers” people, who enjoy the challenge of math and figures, but they also consider themselves creative, and enjoy just as much coming up with new recipes and delectable foods for their family of customers.

Additionally, their creativity dovetails nicely with a long-held tradition started by the Wojciaks of featuring local artists on the walls of the restaurant. Brandy’s is in its 20th year of featuring student artwork from the Flagstaff Arts and Leadership Academy and Coconino High School.

“We’ve also brought in some new artists,” Kelsey said, and Jamie added that it is a goal of theirs to feature a new artist each year.

“You get to know a little bit about everybody,” Jamie said.

What’s the secret to success? Good food, good service, and they say Ed and Brandy have been good advisors on how to keep the locals and their families coming back and happy. The Draytons make sure to feature new dishes, keep it interesting and not stagnate. Nevertheless, they focus on staying consistent in good food and good service. The restaurant has been featured on food TV shows, which helps attract tourists from across the country and even internationally.

Brandy’s serves breakfast and lunch, seven days a week. The food is coffee, espresso and American comfort food made from scratch – with a twist.

“It takes a bit more work,” Kelsey said. “But the food comes out better.”

When asked if they would change anything, they are both quick to say “not really” because their lives before becoming restaurant owners have prepared them for where they are now.

“And here we are,” Jamie said, looking around the restaurant. “There’s never a dull moment, that’s for sure.”

There are hard days and hard seasons, Kelsey said, but it’s all been worth it. “I’m really happy.”

What’s next for the Draytons? Well, they are considering the possibility of expanding in the future.

Kelsey: “We greatly admire Ed and Brandy Wojciak. Running successful restaurants for more than 35 years is a huge accomplishment, and we have learned so much from their experience. They have been both like family and mentors to us.”

Kelsey: “With the two young kids, we don’t do a lot of traveling, but lately we have been going to Phoenix a lot to watch the D-backs. I’m sure we will be due for a Disneyland trip in the next year or so.”

What is your superpower and when do you use it?

Jamie: “We are both pretty sarcastic and use humor to our advantage. We joke around a lot with the staff to keep the mood light and diffuse tense situations.”

When was the last time you laughed out loud?

Jamie: “While taking photos for this interview!” FBN

Kelsey and Jamie Drayton were destined to own a restaurant. They take great pride in their made-from-scratch American comfort food served with a twist.