You are here: Home / Business / Dressing the Downtown with a Wee Bit of Fabric 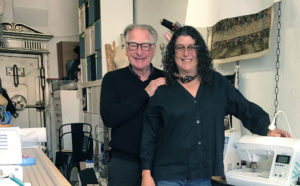 There is a new shop in town, and when you visit, you will be inspired to grab some needle and thread.

The doors at Wee Scotty Sewing and Craft Boutique on North Leroux Street opened in early February and the place has rapidly become a creative center.

Wee Scotty owner Lynne Gallagher has dipped her toes into every part of the fashion industry, from product development to costume design, dressing actors in numerous theatrical productions and musicians in touring rock bands.

At the new location, Gallagher’s fashion runway includes a full range of sewing-related offerings, including a sewing school for all ages, craft supplies, sewing notions, quilting necessities, top-quality fabrics, a design center, as well as the sales, repair and servicing of sewing machines.

Of special interest are the sewing classes. “COVID has piqued interest in new, curious sewers,” Gallagher noted. “We have been servicing smaller classroom sizes in person and on Zoom. And it has been a huge success in every way.”

Pandemic precautions include sanitizing before class begins, questioning participants about possible exposure, running HEPA air filters, requiring social distancing and enforcing mandatory mask wearing throughout class. “Everyone gets their own set of tools and machines to work, then we re-sanitize again after the departure of students,” she said.

During the summer, Wee Scotty plans to offer week-long sessions for young people, often assisted by teens who have studied previously with Gallagher.

Gallagher, who was born in the Motor City of Detroit and raised in Buffalo, New York, was very excited to find a place of business in a historic landmark location, which she describes as “the first location of a vaulted bank in Flagstaff, a few doors down from the train station.”

She and her husband, Frank Gallagher, who is on hiatus during the pandemic from his work as a production and tour manager, had visited Flagstaff many times through the years to visit family. They decided to relocate from San Francisco, where they had opened their last store. Gallagher ran sewing classes for kids and developed one of many clothing lines for Banana Republic, Levi’s, Joe Boxer, bridal designers, Vogue Patterns and a rock n’ roll inspired line of clothing for children, dubbed “Wee Scotty.”

“We literally packed our store into a pod and expected to find a location by April 1, but leaving a sunny afternoon from Mother Road, I took a turn on Leroux and this little place was calling to me. I have all the same great feelings about sharing my experiences in creativity and design with this new community of creatives here in Flagstaff,” she said.

The store name, Wee Scotty, comes from Frank’s Scottish ancestors, who “make a mean family recipe shortbread,” she explained. Frank is helping at the store, as is their daughter, Leah Jean Gallagher, who at 3, was already a “natural” seamstress, her mother said.

“She currently works as the youngest hire of Wicked on Broadway and at the Metropolitan Opera House and many other Broadway shows,” Gallagher said. “As a musical theatre major at New York University (NYU), she was a freshman and brought all her sewing experience to the graduate program and was hired as wardrobe supervisor for the graduate department for four years during her education.”

Lynne’s interest in sewing also started at a young age. “I have been sewing since I was 7 years old. I am from a big family of seven kids, five boys and one sister, who is 11 years younger. I have to say I tried for years to play baseball, but they always put me in the outfield. I knew I had to find my own passion. Our neighbor, Mrs. Schwob, was an educator, and she must have known I needed some attention. She would have me over to show her current works and her slick, top-of-the-line Husqvarna Viking machine. Finally, she said to my mom, ‘Barb, I think Lynne likes sewing, and I am teaching a class on stretch fabrics. I would like to bring her with me.’ Well, that was it; simply all my girlfriends in the neighborhood had a new bikini bathing suit that summer! At age 7, I mastered elastic application!”

In middle school, she didn’t want to take any music classes and was only interested in taking all the sewing classes. “The principal argued his point of ‘what is required,’ and my mom said, ‘Let her take the sewing classes if that is what she is good at,’ as I stood off to the side crying for more sewing!”

Lynne started her first sewing enterprise in her apartment in 1995. “First jobs were with various rock stars (Billy Dean, Charlie Watts, Robert Plant), and Joe Boxer, developing three lines of apparel for teens, women’s PJs and men’s boxers. Charlie Watts, the drummer for the Stones, came to me for custom shirts; he always dressed dapper, and we met when I worked on the Steel Wheels tour in ‘89.”

At the new Flagstaff store, a needlepoint section has been added, and Wee Scotty has sold out of sewing machines many times during the months of the pandemic.

“We offer machine sales for Brother and fully educate buyers with that purchase with free lessons on how to use your new machine,” Gallagher said. “Over the years, I have sold every brand, make and model, and we really have found a home with Brother. We have great machines at every price point.”

After finishing unpacking and organizing the new space, plans include new clothing lines. “I have always loved sewing fashions to wear,” she said. “The kids’ line was a lot of fun to design, and I will probably continue that after we settle in a little more.”

Gallagher says a number of her students have taken their education to the college level and have earned degrees at NYU, Parsons, New School of Design in New York, Savannah (SCAD), Northwestern University of Michigan, Pratt, FIDM, RISD and Stanford.

“Fashion is serious, and there are many levels to take this type of education and skill development,” she said. “Many of the kids, who are now adults, are working in the industry in Manhattan, Paris and Milan as fashion journalists, stitchers, designers, opera singers and even architects. It’s all in your imagination, come in and unleash your dreams. Learn to work with it!” FBN