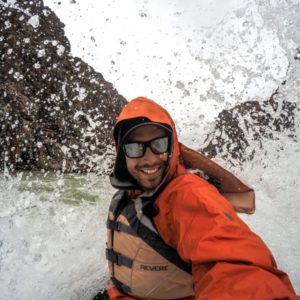 Chad de Alva’s favorite people are those who are comfortable being uncomfortable – people who are out there in wind, rain, snow and sand – people like himself who are thankful to be out there knowing it is better than being in a cubicle somewhere.

The video drone operator and photographer is happiest skirting on the edge of hypothermia or heat exhaustion, flying his drone, taking photos and creating documentaries from his unique perspective.

“It started out as a hobby,” he said. “In September of last year, I decided to make it my day job.”

Up until then, he had been employed by W.L. Gore and Associates with a steady income and benefits, but the call of adventure caught up with him.

While working at Gore, he flew drones for fun as a hobby.

“Family and friends would notice and asked ‘can you come take a picture of this or that or do some video of that for me?’” he said. “It became a side job for me.”

After a few years, he had enough momentum to do photos and videos full time, so he took the brave step away from his day job.

“It’s been going really well,” he said. I am very fortunate to have a wife who has a professional job, which keeps the lights on and having a paycheck. I definitely owe her a lot.”

Drone technology is his business niche. He went through hours and hours on simulator to learn to be a drone pilot. Before that, he taped cameras to his helmet to capture the action. “It was very primitive. Drones were just a progression of that. I got one in early 2013.”

De Alva is FAA certified and can do aerial mapping and surveying, but he loves following action.

“You can go online and see tons of footage of people skiing and mountain biking and a lot of real Western cattle ranching, but the view from above is a cool and unique observation.”

He has done considerable work for Babbitt Ranches and Arizona Nordic Village. While working on a piece for Babbitt Ranches, he learned from the view from above that a herd of cattle move like a school of fish. His film shows cattle rounded up by cowboys in the traditional Western manner – on horses, not ATVs. He said his project can be used to show how the ranch is being managed.

Among his many assignments, de Alva has also worked on an adventure film, an Alaskan moose hunt with professional hunter Cameron Hanes and also supported a National Geographic film crew also during a hike though the Grand Canyon. He worked with the BBC as the network filmed a Hopi corn harvest and aided in a documentary about the Grand Canyon Tramway.

“Chad will go out there and fly his drone during the race, which we can use as advertising or on Facebook and other social media sites.”

But, he says, his drone video is not always taken from overhead, as in the case of a rock climber client. De Alva flies the drone beneath him and points the camera up as the climber hangs from cliffs.

De Alva recently was a guide for a blind kayaker in the Grand Canyon for a BBC production. If you want to go to some remote backcountry places, he arranges filming production in seamless and worry-free trip.

He says he feels fortunate to be able to partner up with other locals like Harlan Taney, who operates 4 Corner Film Logistics.

Taney is an established photographer for National Geographic, the BBC and other organizations. “I have a company here and I hire Chad quite regularly to work as an aerial pilot for me. I have a terrific working relationship with him,” Taney said.

One of their recent adventures was filming a Japanese game show. “The client produces programs like Cash Cab. They pull teams together from high schools across the country,” said Taney. “They compete and there is strong rivalry, like between football teams here.”

Recently, a client wanted to race six semi trucks across the desert, so they arranged to have State Route 89 closed between Marlow and the Grand Canyon.

“It was an amazing experience. We were cruising down the highway with a drone following us,” said de Alva. “We had traffic control and the DPS hanging out. It was a 16-hour day and I was thinking, ‘I am getting paid for this. I would do this for free!’”

Raised in Telluride, Colorado, de Alva spent his youth skiing, hiking and mountain biking. He came to Flagstaff to attend Northern Arizona University in 2005. After a few years, he moved to Phoenix to be with his girlfriend, now wife, Bethany.

“There are so many people, my wife, for instance. Ben Knight was my high school photography mentor. I would call him my hero in the industry, and my parents, who let me abuse their cameras when I was a kid. Also, David Breashears for his Everest IMAX movie. Lesson: being a filmmaker isn’t easy. Not only do you have to carry all of your personal gear, but you’ve got to haul camera gear as well.” He says that Flagstaff filmmaker Justin Clifton and cousin-in-law Rhett Reece are big influences in his life, too.

“The Guardian or Gladiator or any good adventure movie. Something that is masterfully well-shot.”

What character qualities do you most appreciate in others?

“Folks who are down-to-earth and humble. Folks who under-promise and over-deliver. Folks you can count on. People who are comfortable being uncomfortable.”

“Anywhere. I’d like to set foot on all seven continents before I die.”

When they make the movie about your life, who will play you?

“A young Sean Connery. He has been everyone, from James Bond to a Soviet submarine captain. He’s such a talented guy.” FBN