You are here: Home / Business / Drones Earning their Space in the Sky 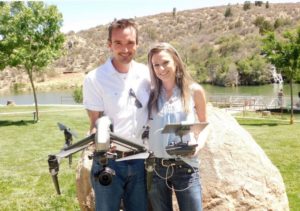 Chad de Alva of Lightforce Media, LLC has been working with Unmanned Aircraft Systems (UAS), commonly called drones, for more than seven years. In that time, he has advocated for the industry and educated others, while piloting numerous projects for which drones and their payloads offer new, innovative and cost-saving solutions to a myriad of problems.

Besides his company in Flagstaff, de Alva is a partner in Flagstaff-based 4 Corner Film Logistics, LLC, and also flies drones for other firms independently. His drone career began with the lure of web videos and a hobbyist’s unbridled enthusiasm. Reading everything he could, buying parts online, tinkering and cobbling systems together, he quickly built a reputation as “the guy who flies drones” and in 2015, he decided to “quit my day job and make flying drones my profession.”

He immediately applied for a Federal Aviation Administration (FAA) Section 333 exemption, and, later, a Remote Pilot in Command certification when the agency initiated new a regulatory policy in 2016. To fly commercially, a drone pilot must have a Remote Pilot in Command certification and operate under the FAA’s Part 107 Regulations. Both the Flagstaff and Prescott airports are surrounded by Class D airspace, which require a Class D airspace authorization or waiver in order to operate drones. De Alva applied for and has been granted a waiver to fly within the Class D airspace in Flagstaff.

De Alva said he has done quite a few different jobs that can be done with drones through various companies. His ventures include filming/photography and geospatial applications. Projects have taken him across the country, and within the next year, he plans to work internationally.

More and more, drones are being called on to use for real estate videos, search and rescue missions, wildlife and forest research, rooftop inspections and more – and their applications are expected to continue to soar.

The flourishing global drone industry will top $12 billion in revenues in 2021, compared to $8 billion in 2015, according to BI Intelligence. PwC in 2015 estimated the potential value of drone powered solutions across all addressable industries at more than $127 billion worldwide.

De Alva has completed film and video projects for entities such as National Geographic, the British Broadcasting Company (BBC), the Arizona Office of Tourism and OutsideTV. He has also worked with companies specializing in engineering, construction and other fields utilizing various remote sensors.

“I get to fly in some really neat and special places,” he said. “I have been doing this long enough that I’ve done some consulting work too, where various entities want to develop drone programs to help them more effectively do their jobs or provide better service.”

Similar to land-based vehicles, such as trucks for hauling heavy loads and cars for better fuel mileage, drone platforms and payloads also vary. De Alva has worked with it all: from lightweight packable drones in the backcountry to much larger rotary aircraft with six-figure price tags.

What had become a “very convoluted legal environment” has eased somewhat with regulation, de Alva said, but still attracts amateurs passing themselves off as commercial drone pilots.

“The drone industry is exploding,” he explained. “It’s a very interesting industry to be a part of because it is evolving so rapidly. Drones are a disruptive technology that have a high degree of ‘gee whiz’ appeal, so everyone wants to fly one and get involved. And so, you have people out there who cut corners and do not take the correct steps to operate commercially. That’s unfortunate because ultimately that can put anyone involved with that operator at risk – it’s like driving without a driver’s license. Yeah, you may get away with it, but if you get caught or have an accident, it’s going to be that much worse when it comes to light that you’re not licensed or insured.”

“I have been passionate about flight training my entire life,” shared Reverdiau, co-owner of AZ Drone, a commercial drone services provider. “For 12 years, I worked for a large aeronautical university, the Florida Institute of Technology. While there, I became interested in drones as they were starting to become popular. During my tenure at North-Aire Aviation [in Prescott], one of our great flight instructors, who had a lot of experience with drones, helped expose middle school kids to this cool technology. Seeing the kids’ reaction was priceless and reinforced my idea that [drones] were here to stay.”

Reverdiau said that as he “started flying my drone commercially and perusing various forums, I realized that there was a lot of misinformation online. I also found a few pilots who were unintentionally doing things that were illegal or dangerous, because of a lack of education. As a new industry, it’s important that we educate pilots on what they can/should do and what they absolutely can’t/shouldn’t.”
Both de Alva and Reverdiau invite inquiries when they are out in the field. However, they also caution that the drone pilot should only be approached after the craft has landed. FBN