By Flagstaff Business News on November 24, 2013 in Business 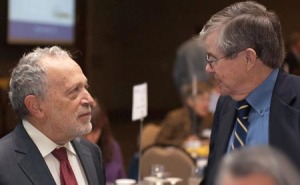 For hundreds of Flagstaff business people trying to understand what might be happening with the economy, Northern Arizona University offers its annual Economic Outlook Conference.

The message from NAU economists is that we are recovering from the economic downturn of 2007, but slowly. College of Business Economics Professor Ronald Gunderson, Ph.D., is not forecasting an actual recession in 2014; however, with sluggish conditions continuing to occur, he says many households feel the economy has not pulled out of the previous recession.

“The national economy is highly likely to continue down the path of slow growth, in part, due to uncertainty and political gridlock on everything from health care, immigration reform, tax reform, Federal Reserve policies and weakness in the global economy,” said Gunderson. “An increasing number of economists are revising their forecasts downward for 2014, and at least one recent Nobel Prize winner in Economics has not ruled out the remote chance of another recession on the horizon.”

Even so, he says, the local economy appears to be healthier than the national economy.

“At this point in time, it seems to be moving forward at a reasonable pace. Median home prices are back over $300,000 after having fallen below that level for the previous few years. City tax revenues increased over six percent in the last fiscal year with strong growth in auto sales and better than expected increases in the hotel and restaurant sectors. Construction activity is picking up as well in many locations around town and on the NAU campus,” he said.

Although this is good news for Flagstaff, Gunderson says, the community will not be able to sustain this growth over the long haul if conditions turn downward nationally.

“I would call it a brittle improvement,” said Van Slyke of the recovering economy. “It’s easy to break and hard to put back together. Any number of shocks to the system could change all of this.”

Shocks could come in the form of super storms, wars and bubbles, like the rise and fall of the housing industry.

He says the recent increase in housing and auto sales could be the result of pent up demand, as consumers have grown weary of putting their lives on hold. But, says Van Slyke, there is a tremendous difference in the tone of business owners and CEOs from a year ago. “They are still guarded, there’s still uncertainty, but they are much more positive.”

And as for the recent recession, Van Slyke says, “It could have been like a storm that comes in and cleans up all the garbage off the beach. That’s what hurricanes do. They’re no fun at the time, but they are part of the natural force of things. The fact of the matter is we had gone crazy with home ownership and consumer spending. As a society, we’re much more rational now.”

NAU Economics Professor Dennis Foster, Ph.D., warns we may be in the calm before another storm. “It’s like being in the eye of the hurricane. There are tremendous forces out there that can really ruin our economy. The monetary base has jumped from $800 billion in 2009 to $3.6 trillion today. So, while the economy seems okay, but not stellar, I think it’s the lull before the storm. We’ll get inflation and it has the potential to take off like nothing we’ve seen before. And, that will lead to monetary authorities putting on the brakes and sending us into another recession. When will that be? I don’t know. It could be two, or three, or four years down the road. The only thing postponing this is our slow and miserable economic growth rate.”

“In all the developed nations, the U.S. has the most unequal distribution of income and we’re surging toward even greater inequality.” Reich says 95 percent of the economic gains since the recovery began in 2009 are going to the top one percent. “Meanwhile, median household income keeps dropping, adjusted for inflation. Where are people going to get the money they need to keep the economy going?”

Reich, who has produced a 2013 documentary called “Inequality for All,” says it is getting harder and harder to finance higher education. “Recently, many public universities have seen a reduction in their state funding, leaving them to raise tuition—which, given stagnant or declining wages in the U.S., makes it more difficult for middle-class families to afford. In the 1960s, public college tuition was about four percent of median family income; today, it’s almost 25 percent,” according to Reich.

“Sharing ideas and information, and promoting economic development is an important part of what NAU does,” says Van Slyke.