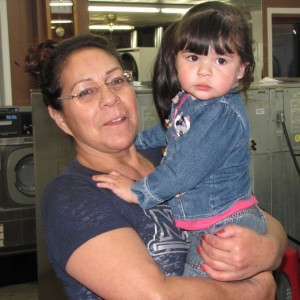 Tucked away on a quiet corner in Sunnyside neighborhood where East First Avenue meets North Main Street, one of Flagstaff’s best-kept secrets has been churning out clean clothes for more than four decades. Estrella Laundry is presently owned and operated by 53-year-old Toni Estrella, for whom the laundromat has been everything but a secret – built, as it was in 1971, in the backyard of her childhood home. Prior to Toni Estrella assuming the reins, Estrella’s mother and father, Alice and David Estrella, owned and operated the laundry facility for 38 years.

Toni Estrella was just 10 years old when she began learning the laundry trade from her mother – and, on other occasions, helping herself to the cash register’s supply of quarters. “We all did it. We just wanted to buy candy at the corner store. My mom knew,” Estrella explained, just the last, loose stitch of guilt apparent in her bright, broad smile. Estrella’s coin-snatching accomplices were any combination of nine brothers and sisters, a brood that required their mother to turn many benevolent, if blind, eyes.

It was in the early 1970s, nearing her 40th year, that Alice Estrella settled on the idea to build a laundromat in the family’s back yard. Conspiring with her husband, Alice saw the empty lot behind their home as offering a solution to the tension parents too often face: the need for two incomes competing with the desire to be with their children (10, in this case). Alice was busy enough working two part-time jobs, while David was employed full-time with Southwest Forest Industries. Toni recalled her parents’ thought process at the time.

“‘What are we doing, running ourselves ragged? We’ve got this property: let’s do something with it.’ My mom considered a corner store, then an ice cream shop. But she settled on a laundromat as the safest bet. People will always need clean clothes, good times or bad. It makes sense, doesn’t it? It makes a whole lot of sense!” Estrella’s emphatic answer to her own rhetorical question signals a fierce respect for the family’s matriarch, and she points to her mom’s keen foresight as the reason Estrella Laundry maintains an unbroken, 43-year track record of satisfied customers. Clients include not only walk-ins, but an exhausting litany of recurring full-service accounts that reads like a “Who’s-Who” list of Flagstaff dentists, surgeons and physicians, as well as a confluence of local river companies.

That track record was at one point in jeopardy, though. Estrella recalls noticing signs of decline, and her mother’s waning enthusiasm, after what was then three decades of tending to cloth and customer. Alice Estrella was planning to let the equipment deteriorate and then sell out. But the middle of five daughters, and sixth of 10 children, would not hear it. “‘Mom, you can’t do that!’” Estrella remembers protesting. “‘We have a legacy to carry on.’” Though the younger Estrella was by that time faring well with her own house cleaning business, she began to contemplate accepting the torch from her mother. After Alice Estrella passed in 2005, Toni told her father she wanted to buy the business.

It took more than three years for Estrella to access the funds that would eventually enable the purchase. Despite years of working in tandem with her mother – “I was always at my mom’s side” – and the enviable success of her cleaning business, Estrella was nonetheless classified as a (prospective) first-time business owner. As a single woman without sufficient collateral, Estrella met many rejections before Arizona State Credit Union secured a loan on her behalf. Toni Estrella assumed the owner’s mantle in 2009. Estrella Laundry revenues have increased in each of her first five years, Estrella says.

Estrella’s success results in part from giving customers what they want, and on her laundry list, cleanliness is king. “People hate to do laundry. I hear it all the time. The only thing worse is doing laundry in a laundromat that’s not clean.” Clearly Estrella has impressed this priority on her employees, judging by just a few minutes of observing perpetually-in-motion Ellie, the operation’s quiet, steady-burning main engine. Ellie darts like a hummingbird between machines; her feet pausing only to wipe a surface mirror clean, her arms now paced to a hummingbird’s wings. This mirror-polish standard applies equally to the full-service accounts, a significant portion of Estrella’s revenue stream. “Everything that leaves here has to be perfect,” Estrella insisted, sounding uncharacteristically hard-nosed. Instinctively, though, her soft-heartedness and practicality – traits she attributes to her mother – self-correct. “Well, near-perfect. Nothing is perfect,” Estrella conceded.

It is a tight-knit and committed crew of four to five that keeps performance to Estrella’s squeaky clean standard. Ellie has more than 15 years of service to the laundromat, opening five or six days a week with the certainty of the rising sun. Alejandra is equally faithful in the evenings, her ‘80s disco music ranking as a favorite among customers. Estrella’s partner, David, and weekend warrior, Polo, round out the staff, and typify the establishment’s readiness to help. It is perhaps Toni Estrella’s proudest claim that, “We’re like family here,” and this atmospheric blend of mutual respect and familial loyalty that draws customers back to Estrella Laundry, four decades running. LeAnn, in her 28th year of doing laundry at Estrella’s, folded it neatly into a few words. “Other places are companies, corporate. This is a family laundromat.” She went on to repeat what might fairly be regarded an Estrella family first principle. “People are really nice. If you have a question – like how to get a stain out – they always help.” LeAnn even highlighted a sense of trust. “Other places say ‘hot wash,’ but not really. Here, it’s hot.”

Alice Estrella was renowned for the care and attention she gave customers; it was commonplace for her to offer visitors lunch, a sympathetic ear, and even a loan at times. Her daughter, Toni, recalled, “People would come by with a camera or something and ask my mom, ‘Can I leave this with you for $10?’ They would return in a few days or a week and trade back. That’s the kind of person my mom was. She was just good-hearted.” Estrella, in fact, did this exact thing, just the previous day, when a woman stopped in to pawn a bracelet of turquoise stones for $10.

View all posts by FBN →
E-Cigarettes Lighting Up Consumer Praise, Health Advocates’ and Lawmakers’ Censure
The Importance of Market Research