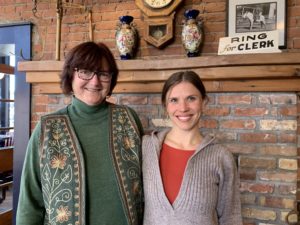 Macy Kiim, Carol Scholing, Karen and Maury Herman are all looking for land on which to build their new homes. They are all seeking the same plot of land and all will be using the same architect. The four are members of Flagstaff Cohousing, a corporation formed to create a village-style custom community in which a group of 24 to 36 households develops an interactive neighborhood where relationships and teamwork are emphasized, all ages are welcomed and celebrated, and living lighter on the land is a goal.

“It’s exciting to be part of something that’s cutting-edge, new and not mainstream yet,” said Kiim, a married 34-year-old Flagstaff woman who is working in the non-profit sector and raising her 7-year-old daughter, Ysa.

Since 2017, Flagstaff residents interested in the cohousing movement have been meeting to imagine this community, explore ideas and discuss shared values. The thought of knowing and caring about their neighbors appeals to the Flagstaff Cohousing members; so does participating in activities together and sharing jobs like cooking meals, tending the garden, watching the children and removing snow. Their vision includes being “…an intentional community that nourishes body and soul and celebrates our diversities and life experiences.” It continues to state, “We are committed to establishing a workable balance between having private lives, doing our share for our community and reaching out to the wider community.”

“Flagstaff is just a cohousing kind of place,” said Scholing, who pointed out that cohousing is one type of community identified in Flagstaff’s master plan.

Like many cohousing examples around the world, the Flagstaff group envisions a common house with a spacious kitchen, large dining room, media room, playroom for kids, guestrooms, and perhaps amenities like a woodshop or gym. Privately owned homes would be built near the common house to accommodate members who may be of various ages, backgrounds and beliefs, and at different stages in life: young families, empty nesters and singles, for example. Each individual home will have a kitchen, bedrooms and even a small yard, but typically the spaces wouldn’t need to be as large as a traditional single-family or luxury home. Dinners and other meals would frequently be prepared and served in the common house; guestrooms would accommodate visitors; and, a car-free community area would provide a place for children to play, as parking spaces would be located on the perimeter of the development.

For the Hermans, their 4,000-square-foot home just isn’t necessary anymore for just the two of them. They look forward to living in a closely connected neighborhood in a home that uses fewer resources. Meanwhile, Kiim loves the idea of having a supportive community environment where Ysa can grow up and play with friends, learn from adults besides her parents, and enjoy the freedom and safety of the neighborhood. And Scholing, a 71-year-old widow who loves to cook, wants to give back and share her interests with others. She envisions activities that bring people together like book clubs, movie clubs and hiking clubs. “We could have a Spanish class, a yoga center or a coffee house,” she said.

“I was attracted in my early 20s when I heard of it [cohousing],” said Kiim. “So often we live really disconnected lives in America. I always wanted to be part of a small, close-knit village, where we’re looking out for each other and have common values. It would be an exciting place for a kid to grow up and designed to encourage interaction.”

The Cohousing Association of the United States lists 165 active cohousing communities in this country; at least four are located in Arizona, with three in Tucson. Prescott’s Manzanita Village is built on a hillside, about a mile from the downtown square with views of Thumb Butte and Granite Mountain. There are 36 residential lots, clustered along a pedestrian walkway, plus a common house used by the residents. “The small-town lifestyle is ideal for working from home, telecommuting or retirement,” according to the website. It says it is designed to nurture “creativity, neighborliness, collaboration, consensus governance, environmental stewardship and global awareness.”

Scholing has explored Manzanita Village, along with Milagro and Stone Curves cohousing communities in Tucson. She envisions an 800-foot casita for herself. “I’d have a very small kitchen with a little stove, microwave and refrigerator so I can eat there if I want to. The private homes usually have a little backyard. A lot of people want their own space when they don’t want to be on the front porch.”

According to the book, “Creating Cohousing,” the first cohousing development was built in 1972, outside of Copenhagen, Denmark. It was created by 27 families “who wanted a greater sense of community than that offered by suburban subdivisions or apartment complexes. Frustrated by the available housing options, these families created a new housing type that redefined the concept of neighborhood by combining the autonomy of private dwellings with the advantage of community living.”

Authors Kathryn McCamant and Charles Durrett say cohousing addresses changing lifestyles and a trend toward the loss of community. They write, “The modern single-family detached home, which makes up 69% of American housing stock, was designed for a nuclear family consisting of a breadwinning father, a homemaking mother and two to four children.” They say today, this household model is in the minority, with the single-parent household as the fastest growing type.

McCamant and Durrett studied and lived among cohousing communities while conducting research for their book. Since then, they have visited nearly 300 cohousing developments around the world and have had a hand in designing and developing more than 50 such communities, which they say foster cooperation and a sense of belonging, while using resources efficiently.

“We have found these communities immensely inspiring. Residents took great pride in what they had created,” they wrote.

One of the biggest challenges for the Flagstaff Cohousing group is finding a plot of land that is within city limits, where residents can walk, ride bikes or take public transportation to town. Members also are open to reusing an existing building for their purposes. They hope to be living in their new neighborhood within two years.

Currently, Flagstaff Cohousing members pay $2,000 to join and be part of the decision-making group. This investment, they say, also goes toward the ultimate cost of the development. There is also a $250 option to explore the local concept. The LLC will become a homeowners association (HOA), which will govern the development.

Flagstaff Cohousing is working with the Coconino County Sustainability Program and the City of Flagstaff to try to incorporate sustainable and affordable housing into the plan. For more information, members are hosting a free showing of the documentary film, “The Best of Both Worlds,” at 5:30 p.m., Tuesday, April 14, at the Flagstaff City-Coconino County Public Library. They also have a website, flagstaffcohousing.org, with a calendar of public social events. FBN