You are here: Home / Columnists / Extending Electricity to Hundreds of Navajo Families 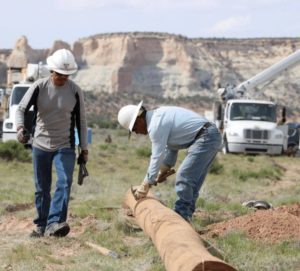 When was the last time you had to decide which one of your electronic devices to use for the day?

For approximately 15,000 families in the vast Navajo Nation that expands into Arizona, Utah and New Mexico, having to make that decision has been a daily reality for years.

In fact, it is not rare to meet a family that has waited more than 20 years to receive reliable electricity. Part of the reason is Navajo people’s traditional way of living, which includes farming, hunting and grazing of livestock. This often requires that Navajo people live on large parcels of land, creating significant distances between neighboring homes, resulting in the lowest number of utility customers per mile in the United States and a high cost of providing service.

Currently, the Navajo Tribal Utility Authority (NTUA) connects an average of 485 homes per year. Earlier this year, NTUA and the American Public Power Association (APPA) saw the need to expedite the process of connecting families and launched Light Up Navajo, a pilot initiative with the goal of connecting more than 200 families within six weeks.

An APS crew of five linemen joined crews from 25 other utilities representing 12 states to help provide electricity to a record number of families as part of Light Up Navajo. The APS team spent two weeks working in Northern Arizona communities from Tuba City to Teec Nos Pos.

One new customer, Victoria Ben, shared that having access to electricity throughout the day and night meant that her children no longer had to do homework by candlelight and that her son could finally enjoy practicing with his guitar after sunset.

Ernest Littlefoot and his wife described the surreal feeling of finally being able to plug in their kitchen appliances.

When asked what they would use first following their connection to power, the Littlefoots exclaimed, “We’re plugging in the refrigerator – and we’ll go buy a bigger one soon!” A refrigerator will allow them to purchase and keep certain foods fresh—such as milk, cheese and fruit—instead of having to use canned and packaged food to prepare meals.

NTUA will service newly connected families and help educate them about how best to keep their monthly bill affordable. FBN

To learn more about Light Up Navajo, visit ntua.com/light-up-navajo.

Janet Dean is the community affairs manager for APS.