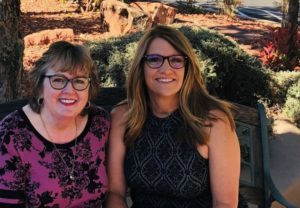 Pioneer Sedona branch manager Janet Gazda is a Northern Arizona native, albeit from Prescott, who initially dreamed of becoming a nurse.

“Except, nursing involved blood. And the thought of blood makes me nauseous,” said Gazda who eventually set her sights on the (almost) bloodless real estate industry.

She got her start in construction, overseeing a group that worked on stores and malls. That job led her to a position with the Association of REALTORS.

“I had a feeling something was not right and later discovered that a member of the team was embezzling,” said Gazda, who took the discovery as a sign. “After that, I was determined to only ever work for someone I could look straight in the eye and believe.”

The “someone” turned out to be NAU alum Keith Newlon, founder of Pioneer Title Agency.

“I took a position a couple years after we opened in Sedona,” said Gazda, who jumped in not only when it came to title and escrow, but in helping local realtors with continuing education, something she still champions on behalf of the office today.

And while Gazda would leave Sedona in 2010 for Scottsdale (for love!) before coming back in 2018, she always stayed with Pioneer. In fact, the mother of three – with four grandchildren and counting – has recruited one of her daughters into the business.

“My youngest is actually living in Cottonwood and working for our sister company, Yavapai Title Agency,” said Gazda, who has delighted in showing her daughter the ropes in recent years.

The only thing that gets her motor running more than that: an actual motor. When not busy at Pioneer or mentoring, Gazda and her husband are avid motorcyclists.

Like Gazda, Deb Staats has been a member of Pioneer Sedona since nearly day one. But her road to the industry – and Sedona – was perhaps even more winding.

“Growing up, I wanted to be an astronaut, but thought I might settle for a pilot,” said Staats, a Michigan native, who went so far as to enter flight school.

Like Gazda, her potential career similarly made her nauseous.

“But not because of blood,” said Staats with a laugh. “For me, it was all those dizzying equations! I was far more artistically inclined, so I changed my field of study to art.”

She would graduate with a degree in the arts and move to Colorado, where she ran an art supply business for 14 years.

“In the 1980s, a boyfriend introduced me to Sedona. I fell in love…with Sedona, that is. Not the boyfriend,” said Staats, who moved to Sedona full time in 1986.

But, she was still nearly two decades from Pioneer.

“I actually opened my own gift shop – eScentuals, named and stylized that way for our popular scented potpourri wax some seasoned residents might remember – and ran it successfully for several years. I even met my husband thanks to the business,” said Staats, who sold it in 1993.

After the sale, Staats got into timeshare work.

“Of all things – I had a knack for handling timeshare closings,” said Staats.

By 2001, she moved over into title work full time, eventually joining Pioneer Sedona in 2004.

“It was right when we were getting the ‘Sedona Top 20’ off the ground,” said Staats, explaining that the Sedona Top 20 is an annual event wherein they work with local brokers to determine the top 20 realtors in the area each year and honor them – plaques and all – during a fabulous night of food and drink at a “wow” residential property in town.

But don’t let the fancy soirée fool you: Staats is tougher than many of us have had to be.

“In 2005, just as I took on the branch manager role for Pioneer, my husband was diagnosed with glioblastoma, an aggressive brain tumor most will know as the type that took Senator John McCain’s life,” said Staats, noting the survival rate beyond a few years is nearly zero.

Staats would have to pull back from managing the branch, but somehow, the determined couple beat the odds together.

“And my husband is still with me,” said Staats, who championed Pioneer’s multi-year sponsorship and participation in Relay for Life in his honor. “Today, he’s a 14-year survivor, a medical miracle and inspiration to me daily.” FBN