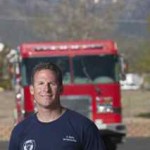 When Pat Burns set out for a jog with his wife, Anita, the last thing the 41-year-old Flagstaff area firefighter expected was a full-blown heart attack. His strong stomach pains and nausea brought him to his knees on the road in Doney Park. Anita flagged a motorist and called 911.

A sheriff’s deputy was driving by and Burns got into his patrol car, baffled by his growing discomfort. He knew the route the fire department would choose and asked the deputy to drive in that direction. His wife ran home to tell the kids she was heading to the hospital.

“Right then I saw the lights and the fire truck coming and I thought ‘thank God,’” said Burns. He was on vacation but would have been working with the responding crew. Burns is an engineer and acting captain for Summit Fire Department.

Burns exited the patrol car and sat down in the street. By then the pain was traveling to his chest, but Burns was still unconvinced it was a heart attack. Captain Paul Simpson and firefighter Mike Pickett discovered the patient was their coworker and they quickly went to work on him.            Burns asked Simpson what the monitor read and was told he had a slight ST elevation. “Well, any ST elevation is bad; it means you have a full blockage,” said Burns, who, as an emergency medical technician, knows about heart attack symptoms. He noticed his fellow firefighters trying to stay calm.

While being transported by ambulance, Burns struggled with breathing, so they switched to Code 3, using lights and sirens. Burns turned to paramedic, Junji Sakai, whom he also knew professionally, and asked what was happening. “You’re having a heart attack,” said Sakai, look- ing him straight in the eye. Burns became emotional, wondering how this could happen to a 41-year-old man who worked out regularly.

At Flagstaff Medical Center, Burns was taken to the catheterization laboratory where they discovered a full blockage of the circumflex artery. Access to the heart was made through the femoral artery and a stent was deployed. 12 hours after the surgery, he was able to walk.

Pat Burns’s heart attack happened after active plaque inside his artery walls cracked. He says his body reacted, releasing platelets that gathered in a small artery, creating a blockage.

Burns wasn’t overweight, didn’t smoke or have diabetes. What he did have was a family history of heart disease, more serious than he had known prior to his cardiac event. He has learned a lot from his interventional cardiologist, Dr. Omar Wani, of the Heart and Vascular Center of Northern Arizona.

Unlike many heart attack patients whose long-term exposure to cholesterol creates blockages, Burns’s attack was caused by what Dr. Wani calls vulnerable plaque. “What dictates vulnerability is your risk factors,” said Wani, who recog- nizes Burns regularly passed stress tests on the treadmill. “If your family history is bad, be proactive and see a doctor,” he said, adding that he prefers to be a preventative, rather than an interventional, cardiologist.

“The whole premise of heart disease has changed over time and it’s because of the way we eat,” said Wani, adding it’s no longer an exclusive concern for the elderly. He cited a landmark study in the Journal of the American Medical Association. Researchers discovered evidence of heart disease in a group of male soldiers killed in the Korean War. The average age of the deceased was 22, with 77 percent displaying signs of atherosclerosis, a thickening of the artery walls usually caused by cholesterol buildup.

“Exposing your arteries to it for a long time and then thinking about it when you have chest pains is too late,” Dr. Wani said. “The most important thing I want people to understand is to control their risk factors.” He suggests people contact their primary care physician or his office.

Burns believed he was in reasonable health because of his checkups and a cholesterol reading below 200. “What I’ve learned from Dr. Wani is that even though I had 192, for me, that is too high because I have such a bad family history,” Burns said. He recognizes fatal heart attacks are especially prevalent among firefighters. “You can be in bed at night with your heart rate down around 40 or 50. When the tones go off and you hear about a rollover accident on I-40 with casualties, your heart rate jumps from nothing to 150 beats per minute,” he added.

Burns is back running calls these days. Along with his regular duties at the firehouse, he’s sharing his story with others, hoping they will take positive steps toward heart health. Some fellow firefighters and members of his church group have heeded his advice and sought medical attention. One friend discovered he needed a procedure done by a cardiologist, and the friend is grateful for Burns’s encouragement. FBN