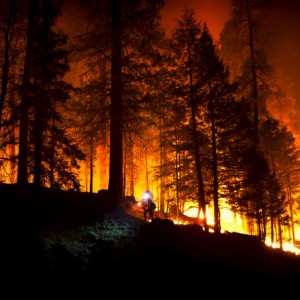 Up until the recent heavy winter storm that hit in early March, Northern Arizona was experiencing an unseasonably warm and dry winter, causing some concern about the upcoming fire season.

“The storm brings us closer to the normal range of conditions for moisture, but the severity of fire season depends on a number factors, a lot of which have yet to play out,” says National Weather Service Flagstaff meteorologist Brian A. Klimowski, Ph.D.

Nonetheless, because of years of work to thin the forest, fire officials are optimistic that this year’s fire season will not be anything they cannot handle.

Paul Summerfelt, the wildland fire management officer for the Flagstaff Fire Department (FFD), has observed the drought conditions in Flagstaff wax and wane for nearly 20 years. He says that while the current drought does make trees more susceptible to burning, it does not entirely decide the fate of fire season.

“It’s been dry – there’s no denying that,” Summerfelt said. “But, it’s occurred before and it’s cyclical in nature. We’re still in that period where things could turn around in March or April and we could get quite a bit of moisture.”

According to data released in a presentation on Feb. 11 by meteorologist Chuck Maxwell, the drought outlook is expected to improve in most areas of the West.

However, the Palmer Drought Severity Index (PDSI), a measurement of dryness based on precipitation and temperature, indicates that 2014 was the driest year recorded in the West since 1895.

In addition, the average temperature for the West was the highest ever recorded, with an average of 58 degrees, stressing trees in the National Forests.

However, this vulnerability could lead to adaptation. Northern Arizona University (NAU) Forestry Professor Peter Fulé studies the effects of ecological degradation and wildfires. He argues that trees that survive during periods of drought are adapting to more severe conditions.

“Different species and also individuals within a species have different amounts of tolerance to drought,” Fulé said. “In a way, that’s a form of adaptation, because the more vulnerable trees were more likely to die and the ones that were more drought tolerant were more likely to survive.”

He also explained that some experts believe winter precipitation is critical to the trees’ growth.

“[Winter and summer] kind of work in different ways,” Fulé said. “There’s some evidence from studies by a colleague here in the School of Forestry that says for a lot of trees, the winter precipitation is more important. The conclusion from recent work in this area is that ponderosa pines draw more on winter moisture than summer moisture when they’re growing. But summer moisture is important in another way because it ends up limiting fires.”

While summer and the fire season are quickly approaching, the National Oceanic and Atmospheric Administration predicts there is still a 50 to 60 percent chance that El Niño conditions could still appear within the coming months, which would bring significant precipitation to the West, including Flagstaff.

No matter the conditions, FFD is ready to react to any fire situation.

“We have a plan in place for fire,” Summerfelt explained. “Wildland fire is a year-round event for us, and it peaks in that April through July time period. It happens every year, so we’re just exercising a plan that we’ve exercised successfully for a long time. So, what we do going into this fire season is no different than any other year.”

However, Summerfelt says the most important work the department performs is preventative. When homeowners take defensive measures to make their property “fire-wise,” they make extinguishing a potential fire significantly less expensive and safer for the firefighters. The department has worked with more than 800 home and property owners to take steps to mitigate fire damage.

“All of the [preventative work] has to be done before there’s smoke in the sky,” Summerfelt said. “We have a wildland firefighting crew that does a lot of thinning work, and they’ve thinned thousands of acres throughout the city over the last 15 years to get rid of all of those hazardous fuels, because that influences the type of fire behavior. It doesn’t necessarily influence the ignition, but it determines what kind of fire will result.”

According to Summerfelt, fires that occur on properties that have had preventative work done are one-tenth the size of a fire on a property that has not.

The department’s fire prevention efforts stretch beyond individual properties. Some forest restrictions and closures may begin as early as April. This could mean confining smoking and campfires to designated areas. Summerfelt says he believes most residents and visitors understand the need for restrictions.

“Our community is very aware of the threat of destructive fire, and I think that’s why we’ve been able to do so much hazard mitigation thinning, and they understand the cost if we don’t,” Summerfelt said.

Despite Flagstaff’s reputation as a “winter escape” for the rest of the state, so far, the lack of snow early on in the season does not appear to have affected the local tourism economy. In fact, according to an economic impact study produced by NAU, the hotel occupancy rate for Flagstaff hotels in January 2015 increased by nearly 20 percent compared to January 2014. This increase could be attributed to less hazardous road conditions for people to travel to Flagstaff, and visitors could still enjoy some of their favorite warm-weather activities. FBN

For more information about the City of Flagstaff’s “Fire Wise” program, or to set up a property consultation with the Flagstaff Fire Department, call 928-213-2500.