By FBN on February 5, 2015 in Community Profile, Local News 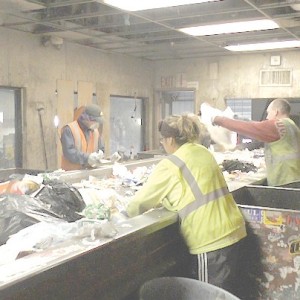 When we check out at the grocery store, we are used to being asked “paper or plastic?” But now locals are discussing whether we should use plastic bags at all, and if so, how we keep them off the streets and out of the landfill.

The issue of controlling plastic bag litter has been on the radar of Flagstaff’s Sustainability Department for years and has moved to the forefront of discussion in Flagstaff City Hall. Opinions vary widely, from banning the bags completely to fervent opposition to any such measure.

One solution being suggested is increasing recycling efforts. Flagstaff resident Rob Wilson was part of the crowd that wedged its way into City Council Chambers on Jan. 13 to participate in the community conversation about regulating so-called single-use bags. Many attendees literally wore their hearts on their sleeves, sporting bracelets, dresses and other outerwear made from the controversial synthetic sacks. Others waved signs or wore shirts with messages ranging from “ban the bag” to “bag the ban.” Wilson carried a recycle box and presented it to City Council members in support of his advocacy of expanding current recycling efforts.

Wilson made the case that recycling is, in fact, feasible, making bans and/or fees unnecessary. He said the plastic bags, along with other thin film plastic waste, could be easily recycled and then sold for $20 per ton to a plant in Utah that converts such waste into wood-alternative Trex products such as decking and outdoor furniture.

This solution clashes with the recommendation of the Sustainability Commission, a group that concluded a ban on the bags, rather than increased recycling efforts, was the best solution. Its recommendation, in the form of a draft ordinance, was shared at the January public meeting. It states, “A retail establishment shall not provide a single-use carry-out bag to any customer.” Further action would include encouraging retailers to supply reusable bags – for free or with a fee – at the checkout counter and having the city’s sustainability program include educational programs about the ban.

Flagstaff’s Sustainability Manager Nicole Woodman says cost is a big factor in favoring a ban. “Staff examined the feasibility of implementing a voluntary curbside plastic bag program. According to Solid Waste and Material Recovery Facility staff, there would have to be a supplemental route similar to residential glass recycling.”

She says this would require modifying equipment and workspace at the Material Recovery Facility, paying for additional drivers and sorters, and purchasing a hauling truck and residential receptacles. Such an effort, she said, would cost $1.5 million.

According to Wilson, though, “That’s a complete waste of time, money and resources. The bags go into the same container, they go into the same truck, they go onto the same conveyor to get sorted out.” He says the process should be simple. “Take all of your plastic bags, put them in one bag, put that into your recycle container, it gets picked up by the truck, and the very first picker will grab that bag of bags and throw it into a bin that gets recycled.”

Wilson says this solution also addresses the ongoing problem of plastic bags gumming up the conveyor rollers at the Norton Environmental Material Recovery Facility (MRF). This costs the facility about $200 a day in time that they have to shut down and clear bags out of conveyor rollers.

“For $200, you could hire a full-time person working eight hours a day to grab all the plastic off first so it didn’t end up in the machinery. Furthermore, the recycle center already has a bailer that will work just fine to bail the plastic bags and other thin film plastics. So the city really doesn’t have to buy anything. They have to do a minor modification to add a new drop bin off this conveyor belt, and that’s it.”

Flagstaff City Councilmember Jeff Oravits has been publicly opposed to a ban on plastic bags. “I’m confident there are other alternatives to explore to reduce plastic bags in the landfill. I encourage the use of reusable bags. We’ve already done education campaigns, but I think we can do better. And I think we have recycling options that don’t have to cost hundreds of thousands of dollars.”

As the debate continues, Interim City Manager Jeff Meilbeck has called for a focus group of about seven people (including Wilson) to research the issue further, discuss solutions and make recommendations to the Flagstaff City Council. A paid facilitator will lead the group. FBN