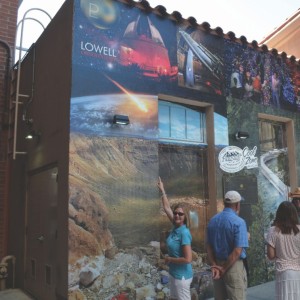 With more than one million people expected to attend upcoming Super Bowl activities in the Valley, planners anticipate a major financial boon that could exceed half a billion dollars state-wide. Locally, the Flagstaff Convention and Visitor’s Bureau (FCVB) is leading efforts to tap into that influx of visitors and direct some of them to Northern Arizona.

Through the years, the Super Bowl has transcended from a simple, but important, championship football game to an iconic entertainment super gala involving years of planning. This year, the actual Super Bowl XLIX game, taking place at Glendale’s University of Phoenix Stadium on Feb. 1, is the culmination of a week of events. Other related activities include the NFL’s Pro Bowl on Jan. 25, also at the University of Phoenix Stadium; an interactive theme park called the NFL Experience that runs from Jan. 25 to Feb. 1 at the Phoenix Convention Center; and the epicenter of Super Bowl activities, the 12-city-block-encompassing Verizon Super Bowl Central in downtown Phoenix, open from Jan. 28 to Feb. 1.

Throw in the 2015 WM Phoenix Open from Jan. 26 to Feb. 1 at TPC Scottsdale, the American Indian Festival at Scottsdale Civic Park from Jan. 29-31, along with two major college bowl games and the result is an intense month of themed events that will welcome visitors from around the world.

“Flagstaff is truly the destination for all seasons, including bowl season,” said FCVB Director Heidi Hanson. “These football games are promoting nationwide visitation to the state, and the Flagstaff Convention and Visitors Bureau is working to capture some of that visitation while also promoting future travel back to Flagstaff.”

To accomplish these goals, the FCVB has developed several marketing strategies. The most significant effort involves the Flagstaff Cool Zone, located in the Legends Entertainment District of Phoenix, on 7th Street between Chase Field and Talking Stick Resort Arena (formerly American West Arena and U.S. Airways Center). The Flagstaff Cool Zone features a full courtyard wrapped with Flagstaff imagery that highlights various cultural aspects of Northern Arizona. It is located on the southern end of Verizon Super Bowl Central, meaning it is right in the path of the hundreds of thousands of visitors expected to the area.

The potential upside of these efforts is significant. A study by Arizona State University’s W. P. Carey School of Business estimates that the 2008 Super Bowl and related activities brought in $500 million to the Arizona economy. And that was during an economically challenging time. Economists from Elliott D. Pollack & Co. project the impact from this year’s game could be at least $615 million, and this does not count the unparalleled exposure of the state by some 6,000 members of the news media expected to be covering the Super Bowl and related events.

“We are in an enviable position in Arizona to have the opportunity to host these huge national sporting events in the Super Bowl, the Pro Bowl and the Phoenix Open, which will elevate our visibility nationally during the winter months,” said Greater Flagstaff Chamber of Commerce president and CEO Julie Pastrick. “We are one of the most attractive winter destinations in the world!” FBN