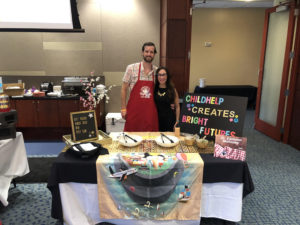 Dr. Eamonn Mahoney loves to cook. The orthopaedic spine surgeon with Northern Arizona Orthopaedics first gained an appreciation for good food in high school when he lived in France. His actual hands-on experience with cooking began in college. “I lived off campus and had to cook to eat, and I like to eat. I’m pretty much self-taught and have been learning tips and tricks from friends
and observation through the years.”

For the past three years, Dr. Mahoney has been sharing his culinary talent with the Flagstaff chapter of Childhelp, a non-profit organization dedicated to the prevention and treatment of child abuse. Through its annual fundraising program, 25 Men Who Think They Can Cook, Mahoney has raised thousands of dollars. His Fried Gnocchi with Brussels Sprouts recipe brought in nearly $3,800 in June. Both his homemade Pappardelle Pasta with Short Rib Ragu and his Beef Bulgogi Tacos with a homemade Kimchi and Spicy Slaw have been first-place entrée winners for the past two years.

But, because of COVID-19, this year’s event was held virtually. Chefs cooked at home, often with the assistance of their wives and children. As Mahoney demonstrates his latest recipe on camera from his kitchen, viewers can hear the sizzle of the
gnocchi – a potato, egg, wheat pasta – as it sears in butter, and almost feel the zing of Brussels sprouts zested with lemon as fresh parmesan and parsley pulls it all together.

The recipe, he says, came from The New York Times. “I do love cooking. I will often cook with my wife, Suzy. She is a superb cook. We cook for friends, although that has slowed down over the last few months.”

What has not slowed down in recent months is the number of child abuse cases. “I’m very proud to be able to help raise money for the organization,” said Mahoney, “even more so this year in the midst of the pandemic when child abuse has increased substantially and even more help is needed for these children.”

Childhelp organizers say the prevalence of abuse is staggering. Calls to the national hotline were up 43% this May over May 2019. Childhelp hotline counselor Larel Jacobs reports examples of text messages received during the viral outbreak:

My dad punched my little brother really hard and he is making us keep it a secret.

My mom beats me with extension cords when I get in trouble and she tells me she’s sending me to the hospital.

Emotional abuse always happens but the physical abuse has gotten worse lately…she slammed my sister’s head against the wall and broke her glasses and she dragged my brother out of bed, down the stairs, and threatened to lock him outside because he was crying from a nightmare.

Childhelp Flagstaff Chapter Founder and President Jill Babb says with stay-at-home practices, children cannot get away from their abusers; also, teachers and others are not seeing the kids on a regular basis as schools have been closed. “This world has gotten very dark. We have to be the light and the voice for these children who are suffering in silence.”

Brandon Koch, a manufacturing team leader at W. L. Gore and Associates, agrees. “No child deserves to live in fear. Every child deserves love and respect.”

Koch has been involved in the 25 Men campaign for 10 years. This year, he shared his Strawberry Rhubarb Crumble. “To be honest, it was my first time making it. We were given fresh rhubarb from our friend, Kathleen Schroeder. We found the recipe online and wanted to give it a try. It tastes great!”

The Flagstaff and Phoenix chapters combined efforts for the 25 Men 2020 event with a fundraising goal of $75,000. So far, they have raised more than $60,000 in the cook-off. “The hotline reaches everyone,” said Babb. “We have to raise money to keep that going.”

The local chapter has raised more than $1 million in its 17-year existence. Currently, organizers are working with Flagstaff Medical Center to create an advocacy center.

To watch some of this year’s cooks or to make a contribution, visit childhelp.org/25men. FBN

One Response to Flagstaff Men Battling Child Abuse through Cook-Off