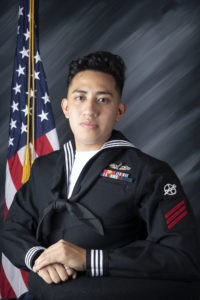 I was a small town boy, both scared and excited, looking to make my own path in life.

Rodriguez-Ruiz joined the Navy three years ago for a better life and the opportunity to attend college.

“I learned that I have a lot of potential within myself,” he said. “I was a small town boy, both scared and excited, looking to make my own path in life. Now, I have served three years and within that time, I have experienced long days of work, a lot of time being underway and deployments, but it showed me what I was capable of doing and accomplishing.”

Iwo Jima is the seventh Wasp-class amphibious assault ship and the second ship in the U.S. Navy to bear that name. The ship was named for the Battle of Iwo Jima of World War II.

According to Navy officials, amphibious assault ships are designed to deliver U.S. Marines and their equipment where they are needed to support a variety of missions, ranging from amphibious assaults to humanitarian relief efforts. Designed to be versatile, the ship has the option of simultaneously using helicopters, Harrier jets and Landing Craft Air Cushioned, as well as conventional landing craft and assault vehicles in various combinations.

“What I enjoy most about serving here is being able to meet and work alongside my comrades while making long-lasting memories,” said Rodriguez-Ruiz.

Although there are many opportunities for sailors to earn recognition in their command, community and careers, Rodriguez-Ruiz is most proud of receiving the Enlisted Surface Warfare Specialist insignia, also known as the ESWS pin.

As a member of the U.S. Navy, Rodriguez-Ruiz, as well as other sailors, know they are a part of a service tradition providing unforgettable experiences through leadership development, world affairs and humanitarian assistance. Their efforts will have a lasting effect around the globe and for generations of sailors who will follow.

“It means being able to represent my family and home,” added Rodriguez-Ruiz. “Growing up from an immigrant family and starting from nothing, I wanted to take advantage of the opportunity to be able to better myself and be able to help my family and have a better life.” FBN

Rick Burke is with the Community Outreach Office of the Navy.