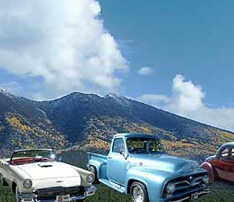 What really big anniversary will occur in 2026?

Which former First Lady may have inadvertently hastened the demise of small-town businesses along Route 66?

Which American Master observed, “Route 66 is a giant chute down which everything loose in this country is sliding into California”?

The economic importance of commemorating the history of Route 66 is recognized and taken advantage of by many cities and towns. Along with preserving Route 66 streetscapes and buildings, these towns have enhanced their Route 66 experience for tourists in other ways—neon and Route 66 shield business signs, murals and mosaics that tell the Route 66 story, Route 66 and popular song-themed sculptures, and 66 designs painted on the Route’s pavement or incorporated into brick pavement patterns, are but a few of the strategies designed to help market the Route’s mystique to tourists.

For Flagstaff however, Community Design and Redevelopment staff members are focusing on a different city-wide design approach for commemoration of the city’s portion of the Route—one inspired by Flagstaff’s visual geology, the world’s largest ponderosa pine forest, and Flagstaff’s proximity to numerous national parks and monuments.

Beginning on the east side of town near the I-40 Walnut Canyon exit and running to Flagstaff Ranch Road on the west, the 15 miles of Route 66 within Flagstaff are envisioned to have several types of commemorative monuments. Where right-of-way conditions allow, native stone monuments constructed in the ‘National Park Service Rustic’ style will announce the beginning and end points of the route within city limits. A similarly designed monument will be at the junction of 66 and Highway 89, and one is being considered on Flagstaff Mall’s frontage along 66.

National Park Service Rustic, sometimes called ‘Parkitecture’, is a style the National Park Service uses to build national park entry monuments and buildings that harmonize with local, natural settings. Structures built like this are characterized by large, roughly-hewn logs, masonry made from local native stone, hand labor, the absence of modern materials, and combinations of materials and forms that reject delicacy and refinement. Structures built in this fashion ‘fit in’ visually to their natural surroundings. Many of these Rustic style signs existed in and around Flagstaff during Route 66’s heyday to direct motorists to nearby national parks and monuments, so historical precedent exists to adapt this type of design for commemorating the route.

Historically and today, most tourists still experience Route 66 by car. However, because portions of Flagstaff’s Route 66 are through downtown’s pedestrian oriented streets, a 66-pedestrian experience is also being considered. This experience would augment existing walking tours by having pedestrian-scale signs installed at selected locations along Phoenix Avenue and Mike’s Pike. Phoenix and Mike formed most of the Route’s original 1926 alignment in downtown. The signs would be modeled after a similar program in La Crosse, Wisconsin, and feature phone numbers that could be dialed for prerecorded oral histories of happenings along this portion of the route.

Although not well known, an integral part of this city-wide commemoration is already in-place in the form of the Route 66 Wayside. The Route 66 Wayside is located on the south side of Route 66 just before 66 turns into Highway 89 (at the arrow shaped sign that directs you to the auto mall). This 600-foot remnant of some of the route’s original concrete is one of the alignments the route took through Flagstaff.

In addition to the concrete, the Wayside has a Ramada, picnic table, and three interpretive signs and one bronze plaque that tell the story of some of 66’s history in, and around Flagstaff. The Wayside is also home to the Arizona Centennial Grove and during years of ample precipitation is carpeted with an incredible display of penstemons and other native wildflowers. Ironically, the Wayside is only one of two parks in the nation that celebrate the route, yet are not accessible by car. You can access the Wayside via the Route 66 FUTS or walk there from the intersection of Fanning Drive and Route 66.

Mark DiLucido is the Community Design & Redevelopment Administrator for the City of Flagstaff.