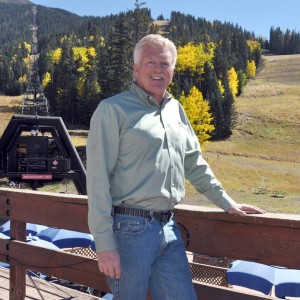 Before there was Hart Prairie Lodge, before Flagstaff had a Fifth Grade Learn to Ski Program, before conveyor belts transported beginning skiers on the San Francisco Peaks, before snowboarding was even a sport and long before snowmaking at Arizona Snowbowl, there was Spring Break in Iowa and a young college student who would have a hand in making all these things happen.

J.R. Murray, a business management major at Northern Iowa University, ventured to Colorado with friends to ski away the stress of the semester. The novice in Levi’s pointed his tips downhill at several resorts. That was March 1978. By October 1978, Murray knew his destiny was in the ski industry. He hitchhiked back to Colorado and began his vertical career climb in the mountainous West.

“I got hired as a lift attendant at Loveland Basin on I-70,” he said. “I worked there full time until I earned in-state residency at Colorado State University.”

Murray continued to work weekends and holidays while going to college. “My professors allowed me to focus on ski business issues for all my projects. I analyzed snowcats, chairlifts and ski resort information systems.”

When Pete Seibert, founder of Vail Ski Resort, bought Snowbasin in Utah, he invited Murray to work with him there. After five years, Murray was offered the Resort Operations Director position at Fairfield Snowbowl. He and Peggy, his college sweetheart, moved to Flagstaff in 1985, got married and began their impressive glide into the community.

“We were able to get to know and socialize with a lot of what are now considered Snowbowl pioneers. That really began our connection to the mountain, the ski area and the community,” said Murray. “The ski community was very vibrant in the ‘80s and ‘90s and the significance of the effort people had made at Snowbowl before me began to develop in my mind. I gained a great deal of respect for the history of the area. Peggy and I became that connection from the past to the present.”

Fast forward to fall 2015 and Murray, Snowbowl’s general manager, is marking 30 years at the ski resort, firing up snow guns and preparing for a pre-determined opening day of Friday, Nov. 20, a luxury that has only been possible at Snowbowl for the last couple of seasons with snowmaking. He is also about to open a new four-seat chairlift that transports skiers directly to intermediate terrain. And every day on the mountain, he works to make Snowbowl better, not bigger.

“The last two years we’ve had drought and record warm temperatures, but we opened on time with 120-day seasons and proved to the community that what we said we would do, we were able to deliver: create jobs, bring people to Flagstaff in the offseason, put guests in hotels, and see increases in the BBB tax revenue. We’ve always felt Snowbowl was a community asset; now we are realizing the impacts of having a ski area with a predictable season.”

“Through years of dedication, J.R. has taken the blueprint for Snowbowl’s improvements – which included wider runs, additional ski lifts and a dedicated terrain park – and turned it into a realty, shaping a small ski area into a nationally recognized ski area. His perseverance has allowed Flagstaff and the surrounding area to benefit from the approximately 200,000 skiers who visit annually,” said Flagstaff attorney and long-time skier Paul Brinkmann.

Greater Flagstaff Chamber of Commerce President and CEO Julie Pastrick agrees. “J.R. is a focused and organized leader who has created a tourism engine that the entire state can envy. He is masterful in the art of telling the story and communicating the economic impact that Arizona Snowbowl creates for this community. He’s made it a priority to keep our lawmakers at the local, state and federal levels apprised of upcoming priorities at Arizona Snowbowl. Without their support through the years, Snowbowl would never be what it is today, a premier Southwestern ski destination. His passion for the industry is recognized throughout the Rocky Mountain West and the nation and we are very fortunate to have J.R. with us in Flagstaff. His ability to carry out the expansion and growth plans for the resort is highly admired and has been very successful.”

But the path to this summit has not always been a smooth ride over freshly groomed terrain. In fact, some major moguls included a brush with eco-terrorism and chairlift tampering; the effort to pave Snowbowl Road; the challenge to keep the ski resort operating in drought years; and the 11-year court battle to make snow on the mountain.

“J.R. has persevered through a decade of planning and legal challenges to bring Arizona Snowbowl to its next level of improvements and he might be the most qualified person in North America in ski resort management,” said Mountain Sports Flagstaff owner Mark Lamberson. “When it is reported that the ski area is installing its first new chairlift in 30 years right now, I am reminded of what a long struggle the ski area and J.R. have worked through and I am proud of what Arizona Snowbowl is moving forward with for the benefit of outdoor recreation in Flagstaff and the state.”

Murray credits owner Eric Borowsky, who bought Snowbowl in 1992, for his vision and tenacity. “Eric set out to make the ski area financially sustainable. We found ways to bridge good years and bad years, but it became abundantly clear that we needed to look for water for snowmaking to have consistent, reliable winter seasons. Eric took the initiative and had the fortitude to see the master plan through.”

Right now, Snowbowl is going from 80 employees to 500 as the 777-acre ski area launches into action. “I’ve greatly valued J.R.’s commitment to providing quality outdoor recreation experiences to forest visitors at Arizona Snowbowl and the surrounding area; equally important is his sense of stewardship for the land,” said Brian Poturalski, recreation staff officer for the Flagstaff Ranger District of the Coconino National Forest. “It’s been rewarding to collaborate with J.R. over the years about current and future outdoor recreation opportunities for the Flagstaff community – always focused on connecting people with the natural environment – while promoting healthy lifestyles.”

Murray says it is the employees and community that develop the vibe and character of the ski area each year. He is especially grateful for long-time employees, like Mountain Manager Dale Haglin and Lift Manager Kevin Wade, who have been on the mountain as long as he has. “At the start of every season we enjoy seeing veteran employees come back, which we rely on the most, but within a couple of weeks the new employees are part of the team and are changed forever. We’re proud that we hire so many young adults and provide their first jobs. So many people have a love affair with the mountain and come back to work or to ski year after year.”

“What J.R. brings to Snowbowl and the community is a lengthy list of efforts and enduring dedication that have resulted in tremendous growth and leading edge improvements,” said Humphrey Summit Ski owner Brian Dierker. “[J.R.] and Peggy are family people with three beautiful daughters. They are involved in a great number of community programs and have always contributed to building a safe and growing local environment. The kid-friendly ski experience of Snowbowl has been a benefit and product of their passion for the whole community. We are all lucky to have J.R. here and will be better as a whole thanks to his love for this place and its people.”

As Murray looks out from the deck at Hart Prairie Lodge contemplating the next steps in Snowbowl’s master plan, it is easy to imagine that same smile of anticipation on the young man in wet blue jeans envisioning the future in the crisp mountain air. FBN

“We’re working behind the scenes to provide people enjoyment,” says Arizona Snowbowl General Manager J.R. Murray. “They can get away from the hustle and bustle, enjoy being outside in the fresh air and create memories with their families. We’re selling fun.”

Do I Have to Rent to College Students?
Nordic Center Prepares for Thanksgiving Day Opening