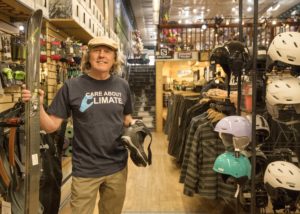 The Santa Fe Railroad may have brought Jerry McLaughlin to Flagstaff, but a love for telemark skiing made this conductor realize the mountain town was more than just a whistle stop for him. For 34 years, McLaughlin has outfitted outdoor enthusiasts, kept their gear tuned up and offered tips for backcountry exploration – first, in a 500-square-foot shop on Aspen Ave., near The Orpheum; then, in the Monte Vista Hotel in the space now occupied by the Rendezvous; and finally, at 15 N. San Francisco St., in 3,500 square feet, where he’s been since 1991 in a building he now owns.

Aspen Sports and the outdoor recreation industry have seen a lot of changes through the past three decades, including the popularity of snowboarding, disc golf and snow bikes. As a result, McLaughlin’s products have diversified, with additions like high-tech sleeping bags and sunglasses. “We’ve adapted to the internet, competition from REI, a ski season that lasted four days and the 2007 economic meltdown,” said McLaughlin.

Through it all, he’s treasured the relationships he’s had with customers, others in the outdoor sports industry and employees. “It meant a lot to me. We were always like a family in the shop and I was always flattered when an employee would come to me just wanting a bit of personal advice.”

McLaughlin’s favorite events were the telemark clinics Aspen Sports sponsored at Arizona Snowbowl. “We would get 50 to 100 telemark skiers wanting to learn for the first time or long-timers wanting to hone their skills,” said McLaughlin. “The event would go on all weekend every year, including races and an avalanche clinic, followed up with a raffle and beers at the lodge. The camaraderie was at its finest!”

“We looked forward to the tele clinics and seeing our free-heal comrades every year,” said longtime telemark and alpine skier Connie Birkland of Rocky Ridge Realty. “We learned a lot about proper equipment and techniques. Aspen Sports was always No. 1 in gear for us tele enthusiasts. Jerry was Flagstaff’s leader in ski biking as well.”

“Jerry has a unique but significant history within the Flagstaff skiing community. He was always positive and creative when it came to fun on the slopes and bringing more people to enjoy the snow in non-traditional ways,” said J. R. Murray, chief planning officer for Mountain Capital Partners (MCP), the management company for Arizona Snowbowl. “Not only was Jerry the driving force of the original Tele Fiesta annual event where hundreds of people learned to telemark before it really became mainstream, years later, he was one of the first to embrace ski bikes on the mountain. His patience with the ski area paid off, as now ski bikes are allowed everywhere on the mountain, the lift operations have adapted to them, and just like Jerry predicted, ski bikes opened up opportunities for a new group of enthusiasts.”

In 1980, while earning his business degree at Arizona State University, McLaughlin responded to a newspaper ad seeking a train conductor. With no experience, he was hired and began his summer job driving for the Atchison, Topeka and Santa Fe Railway, hauling cargo between Phoenix and Albuquerque, with stops in Flagstaff and Winslow.

“In the old days before Aspen Sports, I used to get laid off every winter, January through March. To occupy my time, I learned to telemark ski,” he said.

McLaughlin became an avid skier, kayaker, hiker and river runner and after 10 years of working on the railroad, he believed there was a niche to fill for local sporting goods. He opened Aspen Sports in a little shop across from where Pay N’ Take is now on West Aspen St., while still driving the train for 15 more years.

“Conducting was a real enjoyable job. It got tougher over the years. We used to have larger crews and cabooses. Toward the end, it got more demanding and I was out of town constantly,” he said.

Meanwhile, McLaughlin believed strongly in giving back to his Flagstaff community. “Jerry’s always got the biggest smile on his face, he’s super fun and athletic and has a huge heart – he is the most generous person,” said former Aspen Sports employee and longtime Snowbowl Ski Patrol Director B.J. Boyle.

Among the non-profit organizations McLaughlin supports is the Kachina Peaks Avalanche Center, focused on public education and safety, which Boyle co-founded after the 1995 San Francisco Peaks avalanche death of Rick Nurczynski, an Aspen Sports employee. “He was a tremendous kid, just shy of his 21st birthday and arguably the best snowboarder on the mountain,” said McLaughlin, who continues to stay in touch with Nurczynski’s family.

Current Snowbowl Ski Patrol Director Chris “Layback” Louderback recalls how McLaughlin gave him his first telemark boots. “My boss was B.J. and he said if I learned how to telemark ski I would get a raise. Jerry heard the story and ended up giving me a pair of his old ski boots. I put telemark bindings on an old pair of alpine skis and the next day I skied around on them. Now as head of ski patrol, I find it’s easier to get around the ski area on telemark skis. Jerry got me going in that direction, which turned out to be transformational. And yes, I got the raise from about $5 an hour to $5.25 an hour.”

In the late 1990s, Rich and Heather Reading (pronounced Redding) were exploring the natural environment around Flagstaff. Heather was earning her bachelor’s degree in biology and a master’s in forestry at Northern Arizona University. Rich was building on his outdoor recreation education.

“I used to come into Aspen Sports and talk to [longtime manager] Dave Barnett about new hiking routes in West Clear Creek and canyons along the Mogollon Rim,” said Rich. “I’d go out there and report back about the experience, which he would pass on to other customers.”

The couple moved around the West, including a two-year residency on the North Rim of the Grand Canyon where Heather worked as a wildlife biologist for the Kaibab National Forest. Their life was all about the outdoors – rock climbing, backpacking, camping, hiking, mountain biking and river running. All the while, they continued their relationship with Aspen Sports. “We’d call up Dave and he’d special-order gear for us, whether we were in Fredonia or San Diego,” said Rich.

Most recently, the two lived in Prescott. Rich, a painting contractor, was the owner/operator of Pine Country Painting and Designs. Heather served as the director of land and water protection for the Arizona chapter of The Nature Conservancy.

It wasn’t until a destination wedding in Tulum, Mexico, in November 2019, that the Readings met McLaughlin. “We sat down at a table and started talking about how we knew the bride and groom,” said Rich. “That’s when we learned Jerry owned Aspen Sports. We told him we love Aspen Sports and were good friends with Dave. We also learned Dave was retiring. Jerry said he didn’t see himself stepping back into management.”

“Then, we said jokingly, ‘If you ever want to sell, let us know!’” recalled Heather.

That conversation was almost exactly one year before the Readings closed on the purchase of the business on Nov. 16, 2020.

“The conversations happened pre-COVID,” said Heather. “People think we’re crazy buying a business now, but the store’s numbers remain very strong. So many people who have never had an outdoor experience prior to COVID have learned they love nature. They need gear and good advice about where they should go and what they should do. It’s important for us to connect people with nature.”

“With all the places we’ve been and knowing how amazing it is out there, we’re able to help people learn everything Arizona and all the Southwest has to offer,” said Rich.

While Rich manages Aspen Sports, Heather is launching a conservation division with Land Advisors Organization, a brokerage and advisory firm. “We are both starting new careers and kind of reinventing ourselves,” said Heather.

The Readings say they’ll keep the character of the store; plus, they plan to bring in backcountry adventure truck rentals next spring. “The trucks will be outfitted for camping – Tacomas, Tundras with pop-up tents, awnings, roll-out decks,” said Rich. “Customers will be able to go to our website and basically point at a picture of a place they want to go and we will write out a customized trip itinerary to send them out on their own outdoor adventure, fully outfitted with all the camping gear they would need.”

While the Readings step in, McLaughlin will step out, outdoors. “I’m looking forward to more time on the mountain, to go hiking, to travel, whatever I want. More time is big after wearing many hats and working two-to-three jobs. It’s time to get one off the plate.”

“Flagstaff has a storied history of pioneers working to make Snowbowl what it is today,” said Murray. “Jerry McLaughlin joins that group with his retail risk taking, experimenting with new forms of recreation, and working with the ski area to promote his ideas.”

“With Heather and Rich taking over, I feel that the mom-and-pop feeling of Aspen Sports will not diminish,” said McLaughlin. “I don’t believe I could have hand-picked a better couple that will continue the tradition of selling quality outdoor gear and maintaining a personal and caring business model. With or without COVID, the timing is simply right, which is now.” FBN