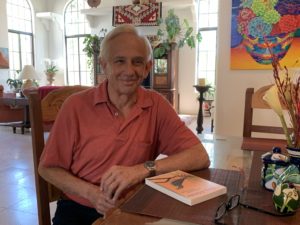 Charles Babbitt grew up in Flagstaff. “It was a very different city then,” he recalled, “about 15,000 people. We had a father who was interested in the outdoors, and he encouraged us to take a deeper look at the natural world. We spent a lot of time driving, hiking and exploring Northern Arizona.”

That deep appreciation and love for the natural world, scenic beauty and science have always been important to Charles as well. The grandson of C.J. Babbitt, one of the original Babbitt brothers who started a ranching empire in Northern Arizona in 1886, Charles is a third-generation Arizonan. Some of his earliest memories are watching Great Blue Herons at Lake Mary and feeding birds in the snowy Flagstaff winter. “I’ve always loved birds and their songs, like those of the Pinyon Jay and the Western Meadowlark.”

It is those songs and hundreds of others that Babbitt encourages beginning bird watchers to listen for. He knows at least 300 by heart. “I like to emphasize that birders learn bird songs. When I go on field trips, I really stress that with people. I tell them we’re going to stop along the way, we’re just going to spend time listening and learning songs and calls. Good birders do most of their birding by ear.”

In his book, “Birding Arizona: What to Know, Where to Go,” the author offers locations, descriptions, maps and observations, noting the seasons and migration patterns in a way that reads more like gentle essays from the field than a fact-filled guidebook. And actually, it is both.

“The book covers a lot of ground,” he said. “It was written to help people find, identify and appreciate the many species found in Arizona, now more than 550. Some of the birds I talk about are iconic birds of Northern Arizona forests, like Clark’s Nutcracker and Pinyon Jay. Much of the book is devoted to beautiful under-birded locations like the San Francisco Peaks, the North Rim of the Grand Canyon and Navajo and Hopi tribal lands.”

He writes, “Ganado, Arizona, is a good starting place to explore the eastern tribal lands of the Navajo. On spring and fall birding trips to this area, we often arrive at Ganado Lake late at night, just in time to throw our sleeping bags on the ground under large willows along the shore. We fall asleep listening to the distant barking of Navajo dogs and the calls of America Wigeons out on the water.”

Babbitt, now retired, was a criminal defense and personal injury attorney who practiced law in Arizona for 40 years, mostly in the Phoenix area. His interest in the outdoors and birding, he admits, is the flip side of his personality as a trial lawyer. “Birding is a wonderful avocation, hobby or pastime to have if you have a very stressful occupation. It’s a wonderful contrast and a lovely escape.”

The 75-year-old says he was introduced to birding in a formal, systematic way, starting with Williamson’s Sapsucker, while practicing law in Tucson. “A fellow lawyer, who later became a judge, took me out birding on Mount Lemon. That’s when I got on that train and have never been able to get off!”

Babbitt enjoys helping others step into that journey of birdwatching, too, noting that Arizona is recognized as one of America’s foremost birding destinations, with almost half of all the birds of North America seen here.

He often leads field trips and bird walks for the Audubon Society and at science and education centers like The Arboretum at Flagstaff. “People who go on field trips are usually just very enthusiastic and good-natured. How could you not be in a good mood in these great areas and looking at birds?”

Regarded in the Audubon world as one of the most knowledgeable birders in the state, Babbitt is credited with the “first Arizona state record” (the state’s first documented and accepted record of a bird species) of a Yellow-billed Loon, which was discovered at Painted Rock Dam near Gila Bend and a Black-vented Shearwater at Lake Havasu. He is also recognized for a “second state record” for a Glaucous Gull. “I’ve found quite a few rare species through the years, including Red-throated Loon, Hudsonian Godwit and Mew Gull.”

Babbitt is the recipient of the prestigious 1999 George B. Fell Award from the Natural Areas Association for a lifetime of professional work and personal effort dedicated to the protection and stewardship of the natural areas of Arizona and the Colorado Plateau. Last month at Northern Arizona University, he was honored by the Arizona Field Ornithologists (AZFO) with an award that states, “In recognition of many years helping to further, through field work and the written word, knowledge and appreciation of birdlife in Arizona, and interesting hundreds of youth in birds and birding.”

As the past president of the Maricopa Audubon Society, a former member of the Arizona Bird Committee and a board member of many conservation organizations, Babbitt is not only interested in birds, he is active in environmental matters. He writes, “It’s clear that birds are sending us a powerful message about climate change, and we would do well to listen.”

From the Arctic to the Amazon, he says, birds are moving higher and higher and wintering further north. “Some nesting bird species are now arriving in Arizona earlier in the spring because it’s getting warmer. Many of these patterns of migratory behavior that have been around since the end of the last Ice Age are timed so birds arrive on breeding grounds when there is maximum food production. If they find that their food sources have already diminished or the insects [that are a food source for birds] have died, a lot of bird species will be in jeopardy.”

He warns, “…climate change resulting in warming winters and drought has the potential to seriously impact, if not extirpate, Arizona populations of Canada Jay, Pine Grosbeak and Evening Grosbeak. A recent study links drought and extreme temperatures due to climate change to the continued decline of Arizona’s Ferruginous Pygmy-Owl population.”

Ultimately, Babbitt wants to share the joy of birding with others and let people know it does not take a lot of preparation or gear. “You don’t need much: a pair of binoculars and a bird identification book. There’s not a lot of cost involved, and with a little preparation, you can get started on a lifetime of sharpening and honing your birdwatching skills.”

Babbitt will be sharpening his own skills as he and his wife, Eleanor, travel the Pacific Coast this fall on a ship from Vancouver, British Columbia to Los Angeles to study migrating pelagic (ocean) birds. Eleanor is an artist who enhanced the book’s cover with her painting of a Grace’s Warbler.

Where haven’t you visited yet that you’d like to explore?

“I would like to visit and explore the Sierra Nevada de Santa Marta in Colombia, known for its great diversity of bird species including many endemic species.”

What are the quality characteristics you most appreciate in others?

“I enjoy people who are well-read, well-informed and who have an appreciation for science and the scientific method.”

What is your favorite restaurant?
“Virtually any Mexican restaurant.”

If you could have a conversation with anyone from the past or present, who would that be?

“I would like to have a conversation with Charles Darwin, one of history’s most astute observers of the natural world.”