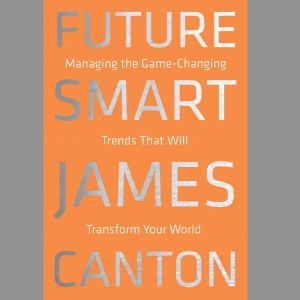 I can predict the future. Believe me, I can. It’s just that I can’t predict it 100 percent accurately all the time. For example, I can predict that at least some readers who get beyond the first couple of sentences of this book review will continue to read it all the way through.

Not bad, eh? It seems I’m pretty good at this prediction stuff.

If you think I’m right, I highly recommend James Canton’s “Future Smart.” He’s pretty good at predicting the obvious as well. “This book will give you insight into how the future will unfold,” he claims. Reading “Future Smart,” according to Canton, “may give you an inside track, an insight that may transform your life, work, and, of course, transform your future for the better.” But, that’s not all. The trends Canton identifies will not only transform you, but “will alter civilization over the next 30 years.” If that’s true, though, why bother writing a book about it. Altruism aside, if I had the inside view on what was going down in the next 30 years – especially if it was going to turn me a significant profit… well, let’s just say I wouldn’t be sitting at my computer right now telling you all about it.

Predicting the future, of course, is an awfully tricky business. The misfired predictions of futurists as far back – at least – as Nostradamus make it pretty clear that rather than predicting the future, humans are much better at retrodiction. In other words, we are pretty good at using present circumstances to explain what happened in the past, but not so good in the other direction (no offense to those who really do believe Nostradamus was right). From a purely logical point of view, we can’t know the future because it hasn’t happened yet. It’s not there as something that can be known. What we can do, instead, is speculate about what may come based on what’s happening right now. Sometimes we can do this with a great deal of certainty; other times, with very little.

Even Canton admits that not every forecast he writes about will pan out. His forecasts, he states, “may be too tame, and some may be wrong.” In fact, what he does fairly well is identify past trends that are very likely to continue into the future. His advice is that you should pay attention to those trends and capitalize on them for your own benefit. Take the case of the future customer, who Canton calls “the Click-Streamer.” These are the customers whose lives are dominated by the Internet – who live, work, and play online and make up the “new global marketplace.” In the near future, they will be “the largest global customer segment on the planet… and will define the future of the marketplace for business.” Given that this is already happening, however, it’s not a great feat to project the trend into the likely future.

Canton also predicts with rather unsurprising verity that “most of the products and services that will be sold by 2030 haven’t been invented yet.” Given the fast pace of technological innovation, just since the beginning of the present century, it’s more likely than not that this will come to pass as well. Equally predictable is Canton’s assertion that most people won’t be ready for the changes that are coming. If there is value in his book, it is to remind the reader to take the necessary steps to be ready and to embrace that change.

Most, if not all, of what Canton writes about is easily gleaned from attentive reading of newspapers, watching intelligent news programs, and keeping abreast of what’s going on in the world right now. I predict that anyone not willing to make that effort will find Canton’s predictions astoundingly fresh and of great value. FBN

View all posts by FBN →
One Last Opportunity to Get Health Coverage
How Much Income Do You Actually Need in Retirement?