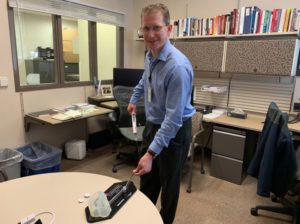 It was 10 a.m. on a Monday morning and Irene Hernandez was still asleep. Her granddaughter phoned for help after failed attempts at rousing her. It had been three days since Hernandez had ankle surgery, but doctors discovered that was not the problem. Irene, at age 62, with no usual symptoms or conditions, had suffered a stroke.

“We’ve long suspected that younger patients, who don’t have high cholesterol and hypertension, are having strokes because blood clots are reaching their brains through a hole in the heart that didn’t close at birth,” says Dr. David Leder, an interventional cardiologist at Mountain Heart in Flagstaff.

The medical condition is called a patent foramen ovale (PFO), or a flap-like hole in the heart. It affects 25 percent of the population.

Not all, or even most, people with a PFO will have blood-clot problems, but in the last 15 years, the condition has received more attention because young, active people are having strokes.

Jake Goble, the structural heart business leader at the W. L. Gore & Associates Medical Products Division in Flagstaff, heads up the team that has been creating and perfecting a device to keep these PFO-related strokes from recurring. It is called the GORE CARDIOFORM Septal Occluder for PFO Closure.

“We wondered if there was a way to prevent strokes in young, healthy patients who have experienced a first stroke,” said Goble. “These patients are not obese, there’s no high blood pressure. It’s scary because these people don’t have typical conditions associated with stroke.”

What was happening, he explained, was a PFO was allowing blood clots to pass from the right side of the heart to the left side, travel to the brain and block a brain blood vessel, which would cause a stroke in a small number of people. Ordinarily, that clot would have been dissolved in the lungs, but the hole in the heart was allowing a passageway to the brain.

Dr. Leder explains that we all have a hole in the wall, the septum, that divides the upper chambers of the heart while in the womb. “When we are born, the tissues between the right and left atria fuse together in most people.”

Gore’s product information describes it like this: “Before birth, a baby’s heart will have a hole with a flap-like covering between the upper two chambers of the heart. This opening (the foramen ovale) allows blood-rich oxygen from the mother to bypass the baby’s lungs, which do not function until the baby is born. After birth, the flap-like covering will typically close the hole permanently. However, in about one out of every four individuals, the hole in the heart will remain open.”

“With these types of strokes, there wasn’t convincing data that would suggest closing the hole would prevent a future stroke,” said Goble. But that changed last year with the conclusion of a decade-long process involving clinical studies for stroke prevention and the benefits of the GORE CARDIOFORM Septal Occluder.

“I was one of the first to see the data,” said Goble. “We were blinded to the outcomes of the trial. In a study like this, you don’t want to have any influence by the sponsor. When we had the big reveal, I almost fell out of my chair to see how positive it was, to see those numbers flash up on the screen and the probability of this being a good benefit, as good as it could be – 77 percent better – than using only anti-platelet medication, like aspirin, for these patients.”

Late last year, the U.S. Food and Drug Administration (FDA) approved the use of the GORE CARDIOFORM Septal Occluder for PFO Closure. “It’s a game changer,” he said. “Gore was the first company meeting its clinical endpoints to address stroke prevention in this space. And we are excited to see how this product is inserting itself into clinical practice.”

The CARDIOFORM Septal Occluder is made of Gore’s patented ePTFE material that has been used in open-heart surgery for more than 40 years. It is supported by a thin wire frame and takes on a sort of butterfly shape with “wings” that close the hole on both sides of the septum.

Goble, whose team designed the delivery system as well as the Occluder, says the device is released and positioned from a catheter inserted into a blood vessel through a small incision in the groin. “It’s very much a straight shot. The tip of the catheter crosses the hole, pushes out the left disc and draws it to the wall of the upper chamber of the heart. It then pushes out the right disc on the other side of the hole. Essentially, it’s a sandwich of left disc, heart tissue, right disc.”

Doctors use ultrasound and X-ray in real time to see the movement as the Occluder is positioned in place.

“There’s a lot of elegance to the design, which is a tribute to the ingenuity of the engineers and how they organically developed it here inside the four walls of Gore. Also, biocompatibility is one of the unique features of Gore’s ePTFE material,” said Goble.

Dr. Leder was the first to use the latest generation of this device in Flagstaff. He has performed three CARDIOFORM Septal Occluder surgeries at Flagstaff Medical Center, including the one for Hernandez in March.

“It’s a procedure patients tolerate well and it’s very rewarding. Being able to use Gore products and treat patients locally is a unique opportunity, so patients don’t have to drive to the Valley,” he said. “Stroke is a debilitating disease and lowering the risk, especially in young active people, is a great service.”

Dr. Leder was familiar with Gore products before moving to Flagstaff two years ago from Chicago, where he served as an interventional cardiologist at AMITA Health Medical Group Heart and Vascular in Hinsdale, Illinois. He was surprised to learn the medical products were developed here. “Gore is a high-quality company that makes wonderful products,” he said. “This community is very invested in Gore. The employees are good people and represent the company very well. They are very proud to work for Gore.”

Today, Hernandez is still recovering from her ankle surgery as a result of a car accident, but her heart surgery is just a memory. Other than a slight tenderness from the catheter insertion in her leg, the Flagstaff Unified School District special needs aide reports no discomfort. “I had great doctors and I feel good!” FBN

For more information about the GORE CARDIOFORM Septal Occluder, click on About PFO on the GoreMedical.com website and hear Kathryn’s story, a compelling testimonial from a young athlete and stroke survivor.