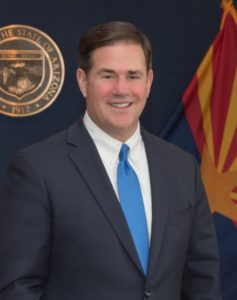 With counting slated to end on September 30, Governor Doug Ducey, joined by members of the U.S. Census Bureau and local leaders, today urged all Arizonas who have not completed their census to do so immediately. Governor Ducey launched the AZ Census 2020 campaign in January with a focus on reaching traditionally undercounted communities through community-based initiatives, a paid media effort and educational outreach. Counting began in March.

Today, Governor Ducey and members of the Arizona Complete Count Committee met with U.S. Census Bureau Director Steven Dillingham at the Capitol to discuss Arizona’s efforts to ensure a full and accurate count.

“Our message today to Arizonans is simple: you matter, and you deserve to be counted,” said Governor Ducey. “Responding to the census is safe and easy — and it’s our civic responsibility. Arizona has seen nation-leading growth over the last five years. We want to maximize the opportunities that come with that. To any Arizonan who hasn’t responded to the census yet, you still have time. Complete your census today by phone, mail or online.”

Census data impacts the distribution of more than $675 billion dollars to states annually for services like healthcare, education, public safety and more. Arizona’s accurate count in the census ensures the state receives its fair share of resources to adequately serve residents. Even a one-percent undercount would represent a loss of $62 million per year for a decade — a total loss of at least $620 million.

“Our mission for the 2020 Census is to count everyone once, only once and in the right place. And with committed partners like Governor Ducey and the Arizona Complete Count Committee, I’m confident we’ll achieve a complete and an accurate count across the state,” said U.S. Census Bureau Director Steven Dillingham. “I’m here to encourage Arizonans to not to wait for a census taker to visit their home and respond online, by phone or mail. It’s easy, fast and completely confidential.”

Governor Ducey and Director Dillingham discussed the state’s 2020 Census outreach efforts, including the work of the Arizona Complete Count Committee established by Governor Ducey last year. The committee’s statewide grassroots and paid media campaign has supported the Census Bureau in promoting participation, with a focus on reaching traditionally undercounted communities in the state, such as American Indian, low-income and Spanish-speaking populations.

“For the past year, we have been working to let every Arizonan know that the census is safe, easy and important through our grassroots and paid media campaign,” said Debbie Johnson, Chair of the Arizona Complete Count Committee. “Our committee has continued sharing this message statewide with a focus on reaching traditionally undercounted communities. In the final days of the count, we’re calling on every Arizonan to respond and remind friends, family and neighbors to be counted.”

Arizonans can respond to the 2020 Census through September 30 online at my2020census.gov, by phone at 844-330-2020 or by returning their completed paper form by mail. Once a response is recorded for a household, it is removed from the list for a visit from a census taker for an in-person count.

For more information on how the 2020 Census impacts Arizona, visit azcensus2020.gov.