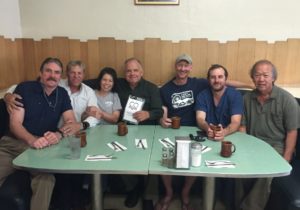 The front door of the Grand Canyon Café in downtown Flagstaff was swinging open and shut multiple times on Wednesday, Sept. 13, and two waitresses inside moved rapidly between booths alive with animated and hungry customers seated for late breakfast or early lunches. The smell of frying bacon and eggs and toasting bread wafted out from the kitchen in the rear of the establishment.

Mid-September was especially busy at the iconic Route 66 dining spot, as devoted patrons visited to pay their respects to the owners and chefs, Fred and Tina Wong, as they headed for retirement after selling their business.

Through the years, the café became a beloved destination in Flagstaff, with constant loyal customers and visitors, all seeking that historic Route 66 flavor.

“A visit to the Grand Canyon Café was just part of the day for us,” said Bill Cordasco, Babbitt Ranches president and general manager. “It was an important thread in the fabric of our lives.”

On this Wednesday, Maite Blin and Regis Loock, both from Beauvais, France, came to for breakfast.

“It’s not expensive,” Loock commented. “You have a beautiful breakfast, very complex. And the staff is sympathetic.”

Wong, who was born in a small village in China and came to the U.S. at age three, took over management of the café in 1980 when his father retired.

Among local eaters on this Tuesday was James Burns, 44, a regular at the café. He works next door at the Galaxy Sales leather and saddle shop, which his family has owned since 1949.

“I’m a local pest,” he explained. “I come and harass Fred and Tina every morning when I come and get my coffee. They’re some of the kindest people. They’re the oldest, and we’re the second oldest [business]; there’s a lot of history between these two places. Fred’s been here since he was a little runt peeling potatoes in the back.”

Burns also orders out lunch, to eat at the Galaxy where he took over in 2015 after his father, Isidore (Izzy) Siebenberg, died. Lunch often is corned beef, his favorite, or the chicken fried steak, which he said is “the best in town.”

With its art deco exterior and neon signage, as well as the eclectic novelty items adorning the interior, the restaurant has been featured in many cookbooks, travel guides and newspapers and magazines, including the Arizona Daily Sun and Arizona Highways Magazine.

“It’s not retirement,” she said. “I’ll find something to do. I can’t sit around.”

“She’s known for her eggrolls, fried rice and Mongolian beef,” he noted. “I’m famous for my chicken fried steak. It’s time for me to retire; I’m 68 this month. We’ll stick around to help the new owners if they need us. Flagstaff is nice and cool in the summertime. We want to thank all the loyal customers through the years.”

One of eight staff members, waitress Paige Sandoval, 23, has been working at the café for 5 ½ years.

“It’s been amazing,” she said. “I’ve known Tina and Fred my whole life, so working here is just like being at home. My great-grandparents, when I was small and we lived in Tuba City, used to bring us in for lunch just about every Friday. Tina and Fred, they’re wonderful employers, but to me, they’re more like a second pair of parents.”

Sandoval is not sure if she will be staying on with the new employers, but another waitress, Beatris Castruita, 28, will be relocating to be with family in Colorado.
“I’ve been seven years at the café,” she said. “I love it. I’ve met so many people here. Fred and Tina have been great. They’re really good people, and it’s time for them to retire and enjoy time with their grandson. I wish them the best.”

Local businessman Mark McCullough was sitting at the “Liar’s Table,” reserved for hunting and fishing friends of Fred in the back of the restaurant.

“I come down a couple times a week,” he said. “I eat healthy; the Chinese is healthier. Tina changes the special every day. They have worked very hard here, but it took a grandbaby for them to retire. I think that’s great.”

At a booth against the wall, Linda Harris sat with her husband, Clair, and Dave Brown, both retired Flagstaff High School teachers, along with Judy Davis, whose husband, Terry, had also been a FHS teacher.

“We used to come at least once or twice a week for breakfast for 35 years,” Harris said. “We just moved out of town. We live not far from Camp Verde where Fred lives, so we know where the food will be.”

Teachers were such frequent diners that seats were assigned to them.

“They would come early,” Davis recalled. “Albert opened early on Friday so they could get to work on time. They all sat in the same seats for years and years. The waitress would say, ‘These people are family.’”

The Wongs always made sure everyone left with a full stomach, including a homeless Native American man who sat in front and was fed regularly.

“We have the most prestigious people in Flagstaff, down to that homeless fellow,” Dave Brown said. “Fred and Tina treat everyone the same.”

Jim Muns, a retired history teacher at Coconino High School, with 31 years in FUSD, has been coming to the café since 1968, when he first came to town to attend college.

“His dad, Albert, had the place; I came in to eat,” Muns said. “I’ve known Fred and Tina about 23 years. I come just about every day. I would come down in the evening and work for them, take cash when they were very busy. After I retired, I upped my job; I’m down here five days a week. Officially, I am the cashier. They’re very, very nice people, who work very hard. I think Flagstaff is going to have a very serious case of chicken fried steak withdrawal.”

Many folks were ordering Fred’s chicken fried steak during the last week the chef would be in the kitchen.

“I’ve had a lot of local customers,” Wong recalled. “They come and go, generation after generation. That’s one thing I’m going to miss, all my friends here – all my loyal customers.” FBN

One Response to Grand Canyon Cafe Turns to New Chapter