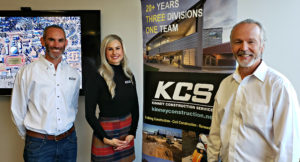 Kinney Construction Services, Inc. is celebrating its 20th year as a business. In two decades, the Flagstaff company has grown to employ more than 70 people and has completed over eight LEED (Leadership in Energy and Environmental Design) projects. Under the leadership of Tim Kinney, a graduate of the College of Engineering at Northern Arizona University, the award-winning firm performs work nationwide.

As one of the first LEED Accredited Professionals in Northern Arizona, Kinney led his company to the adaptation of sustainable building practices early on. LEED is an internationally recognized green building certification program instituted by the U.S. Green Building Council.

“We stay on the cutting edge of technology, management techniques, project delivery methods and sustainability, both within our internal operations and throughout our construction projects,” says Kinney, CEO, in a statement on the company’s website. “Our company culture and core values of integrity, quality, social responsibility, continuous improvement and collaboration with all project stakeholders are reflected in all of our projects.”

To celebrate the 20-year legacy, Kinney Construction Services (KCS) hosted an open house at its downtown Flagstaff headquarters. The KCS leadership team, made up of Kinney, Mike Thomas, president, and Gabe Smith, executive vice president, and others greeted and thanked more than 200 guests, including past and current clients, collaborators, employees and friends. Thomas, who has been with KCS for 17 years, and Smith, who has 14 years with the company, were recently promoted to their top-level positions, composing a long-tenured leadership team that includes CEO Kinney.

Guests enjoyed a colossal grazing board by Jada Santoro of Mama Bird Feeds, live Brazilian guitar by Stephen Paul Guerra, refreshments and a photo gallery of featured projects from the past two decades. Projects included the Museum of Northern Arizona Easton Collection Center, which was named “Greenest Building in the Nation” in 2009, and NAU’s International Pavilion, which earned the coveted “President’s Award” (Best of Show) in 2016, and the “Crescordia Award” in the Arizona Forward Environmental Excellence Awards presented by Salt River Project in 2016. Both buildings earned LEED Platinum certification, which is the U.S. Green Building Council’s highest honor.

Other projects depicted in the photo gallery included current projects: a dining hall at the Florida Agricultural and Mechanical University in Tallahassee, the Maswik South Complex reconstruction at the Grand Canyon and the City of Flagstaff Municipal Courthouse Facility.

KCS is committed to community investment, and its employees have contributed volunteer hours and made financial donations to help local organizations. The Flagstaff company has been involved in many non-profits, including the United Way of Northern Arizona. Further, KCS executed a tenant installation for the United Way of Northern Arizona and served as construction manager for the Hope Cottage facility in Flagstaff, made possible through monetary, material and labor donations, as well as pledges and grants. FBN