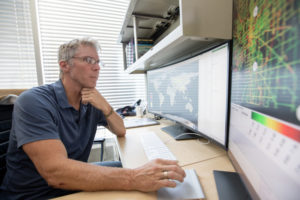 Professor Kevin Gurney of NAU’s School of Informatics, Computing and Cyber Systems is building a detailed three-dimensional map of the urban Washington, D.C. area that will reveal every source of greenhouse gas being emitted into the atmosphere down to individual buildings, like the Pentagon, and roads such as Pennsylvania Ave. Gurney, an atmospheric scientist, says this will be an important tool for the city to use to reduce carbon emissions, assess progress and improve air quality.

The software program Gurney is using to build the emissions map is an upgraded component of his Hestia Project, which quantifies carbon dioxide (CO2) emissions in fine detail as part of a broader effort to standardize emissions accounting in cities. Ultimately, the software has the potential to be licensed to cities and other entities to accurately assess and monitor their climate change and air pollution concerns.

“We are entering an operational phase, going from research to a usable information system we can deliver to cities that helps them verify what they’ve done to reduce their greenhouse gas impact, primarily CO2, and plan what to do next,” said Gurney. “We can tell them, ‘Here’s what your emissions are and here’s precisely what to do to reduce them.’ We can track greenhouse gases in the atmosphere, verify their efforts over time and help them course-correct.”

The Hestia D.C. Baltimore Corridor Project focuses on Washington, D.C. and parts of Maryland and Virginia, which comprise the fourth largest metropolitan area in the United States, the tenth worst in the country for emissions. Gurney’s emission maps will be combined with atmospheric measurements of CO2 taken from aircraft and ground sensors to achieve a state-of-the art estimate of emissions for the whole urbanized corridor.

In 2019, Gurney used Hestia to map the emissions of the Los Angeles megacity, an area of 4,850 square miles with more than 18.5 million people. He has used the same technology to produce high-resolution emissions maps of Salt Lake City, Indianapolis and Baltimore.

“In L.A., we found that 10% of the road surface accounts for 60% of the transportation emissions. In Salt Lake City, a small percentage of the buildings are responsible for the vast majority of the emissions,” he said. “Every city is trying to tackle their greenhouse emissions on their own, but they haven’t had a standardized method to understand where the problems are. With this information system, we can give cities a very detailed tool that they can use to pinpoint exactly what’s going on and where to focus their efforts.”

Gurney compiles information from the ground up to quantify fossil fuel emissions using an array of sources including data from the U.S. Census Bureau, motor vehicle registration and cell towers, along with imagery captured by aircraft and satellites.

He says understanding the air quality of the urban layer is also critically important to policy makers and cities.

“Cities are responsible for a rapidly increasing majority of greenhouse gas emissions on the planet. They want to do a lot and have the capacity to do a lot to improve carbon emissions.”

Previously, Gurney mapped the entire United States landscape with a lower resolution software system called the Vulcan Project, which provides information down to one square kilometer.

“The two systems are linked. Vulcan provides a landscape view and Hestia’s job is to zoom in tighter. It’s like a microscope.” In Roman mythology, Vulcan is the god of fire; Hestia is the goddess of hearth and home.

The two-year Hestia D.C. Baltimore Corridor Project is funded through a grant from the National Institute of Standards and Technology (NIST). Collaborators include the National Oceanic and Atmospheric Administration (NOAA), NIST and the University of Maryland.

Gurney joined NAU in 2018, where he is continuing the research he started while at ASU and prior to that at Purdue University. He has been involved with the United National Climate Change Framework Convention and the Kyoto Protocol for nearly 30 years. In addition to his interests in carbon cycle science and policy, he has worked on stratospheric ozone depletion, radionuclide dose assessment and energy systems and climate-economic modeling.

Gurney is working with the NAU Innovations team – the university’s technology transfer arm – to commercialize the software as intellectual property.

Dark Skies on the Rise
Can Sugar Water Ease Your Pain?