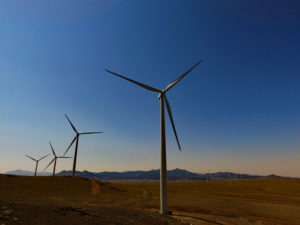 Arizona’s largest wind energy project, the Chevelon Butte Wind Farm, is expected to have turbine blades spinning in a remote area south of Winslow by the end of 2021, and power the region with an estimated $8 million in indirect economic benefits during the construction phase.

sPower, a Salt Lake City-based renewable energy developer, received unanimous approval to move forward on the project from both Coconino and Navajo counties and the Arizona Corporation Commission, which company officials say is a rare feat for any wind farm, much less one of this size. This came just weeks before APS announced its goal to deliver 100% clean, carbon-free electricity to customers by 2050.

At full build-out, the wind farm is expected to be two or three times larger than any other operating wind energy project in the state, with 164 turbines spread across 42,000 acres and generating 477 megawatts, the equivalent of enough electricity to power a community of about 150,000 people.

“We are super excited,” said sPower Senior Permitting Manager Terrance Unrein. “This is the right project for Arizona and for Coconino and Navajo counties’ communities at the right time, especially with the coal plant closures. Wind energy is a great opportunity for our future and I think this is one of the best projects we’re ever going to see in the area, given its incredibly remote and windy location, proximity to viable transmission infrastructure, and planned lack of impacts to threatened or endangered species.”

The company is working with APS to tie into a transmission line from the coal-fired Cholla Power Plant in Joseph City, which is closing down in phases and is scheduled to be completely closed in 2025.

“One of the upsides of the shutdown of coal plants is that it opens up space electrically on those wires for us to be able to bring on a lot more renewable energy,” said Karin Wadsack, program manager for the National Renewable Energy Laboratory specializing in grid-scale tribal energy. “That’s a positive in that it means we’ll be able to bring in more renewables without having to build a lot more power lines.”

In a remote grassland and juniper area some 25 miles south of Winslow, the Chevelon Butte Wind Farm is scheduled to be situated on state and private land owned by the O’Haco family, who operates one of the oldest ranching operations in Arizona. Originally Basque sheepherders, the O’Hacos plan to continue raising cattle alongside the turbines.

The nearest residents in Coconino County are eight miles away; the closet neighbors in Navajo County are about 2.5 miles away, says Unrein. “It’s so remote. We’ve identified and avoided all the cultural sites to date, existing transmission infrastructure adjoins our site so we don’t have to build long transmission lines, and we’ve gone above and beyond with our extensive wildlife studies. Biologists have been on site for more than a year surveying eagles almost every day. We have identified where the elevated eagle use is in collaboration with the Arizona Game and Fish Department and are completely avoiding those areas.”

sPower also has been working with representatives from the U.S. Fish and Wildlife Service to comply with agency requirements. Meanwhile, the company has hired Flagstaff-based SWCA Environmental Consultants to conduct two-year bird and bat studies, among many other investigations.

“Our site evaluations have indicated that there are no threatened or endangered species concerns,” said SWCA Project Manager Allen Graber, an ecologist. “The project design has taken into consideration eagle use of the area. It’s included strong stakeholder engagement and a thorough (above minimum standards) survey campaign.”

sPower is collaborating with the counties to protect the dark skies resource in the region, as well. It plans to install an aircraft detection lighting system (ADLS), which Unrein says is commercially proven technology that the company already is deploying in South Dakota. “Every turbine requires a light on top for aviation safety, period. But we’re installing a radar-activated system. The lights only turn on if there’s a low-flying aircraft within the area. In other words, lights will not be blinking all night. We’ve spoken with the Winslow Airport, and there aren’t a lot of planes taking off and landing in the middle of the night in Winslow. We expect the lights not to be activated very often.”

The company ramped up its efforts in early 2019, including retaining Flagstaff attorney Duane Weston of McCarthyWeston, PLLC as its local legal counsel. Weston stated that he was very impressed with sPower’s commitment to the local community, and he believes renewable energy should become the primary power source for Arizona and the United States. He hopes to see future plans that include more renewable energy projects for Northern Arizona.

The current schedule is for site preparation to begin in the fall, with turbines going up within months thereafter. During the construction phase, the company anticipates the creation of more than 200 jobs and an economic impact of $8 million in indirect spending – for expenses such as lodging, fuel and groceries – in the region, including Holbrook, Winslow and Flagstaff. About 10 full-time permanent “family-wage” positions are expected to be created to operate the wind farm for at least 20 years. Unrein says both counties will benefit from property taxes, jobs and local spending, as will the state with money from land lease payments, which will support Arizona public schools and universities.

Also, the project is expected to save billions of gallons of ground water annually and avoid millions of metric tons of carbon dioxide and other air pollutants relative to coal-fired energy generation.

On Jan. 23, APS Chairman and CEO Jeff Guldner surprised the renewable energy industry with the electricity company’s ambitious 100% carbon-free by 2050 goal. “Our clean energy plan will be guided by sound science, and will encourage market-based solutions to climate issues. Through increased collaboration with our customers, regulators and other stakeholders, we expect to achieve environmental and economic gains without undermining our commitment to affordable, reliable service,” Guldner stated in a news release.

“This is really exciting news,” said Unrein. “And it’s achievable. Other states and utilities are adopting similar standards. We have faith and confidence that solar and wind will keep gaining momentum in Arizona and we are very happy to be here.”

Flagstaff Mayor Coral Evans says the APS commitment aligns with the city’s Climate Action and Adaptation Plan. “We are excited to continue our collaboration with APS and partner on new and exciting projects.”

“Renewable energy is a huge area of economic growth for the United States,” said Wadsack. “The electrical system is connected, so all those states around us that have very aggressive renewable energy goals are going to drive the opportunity for renewable energy development. We’re going to see a lot more interest from these developers.”

sPower grew out of a commercial solar rooftop company in 2012. The renewable energy developer has offices in Utah, California and Virginia and operates one solar project in Pinal County with another breaking ground soon.

“We like to develop the right renewable energy projects, operate wind and solar farms, and invest in communities,” said Unrein. “We’re in these communities for the long-haul and we want to be a good partner.” FBN

2 Responses to Harnessing the Wind